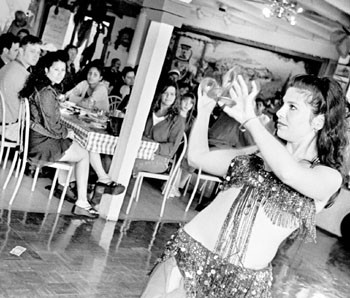 Papa has the food and wine, you bring the dancing shoes

Papa’s Taverna, a Greek-American restaurant in Petaluma, is a bit off the beaten path. But that’s OK. Patrons here don’t look like they’re in any hurry to go anywhere.

“Last night we were here until after two,” says the restaurant’s patriarch, Leo Papageorge. Everyone calls him Papa. “We close at midnight on weekends. Or maybe we close at nine? But everyone kept dancing, so we couldn’t leave,” he adds with a shrug.

The regulars know to bring a blanket for the kids. And when it gets late, the children fall asleep under the dinner tables. Or sometimes all the sleeping children are moved over to one section of the restaurant, while someone’s grandma usually mills about making sure everyone’s covered.

“There’s no reason to leave kids with a babysitter,” Papa says shaking his head. “You bring them here with you so you can all be together. Family is the most important thing.”

Along with family, Papa considers friends, community, and tradition as the essentials for a good life. And Sunday, May 5, everything you need for the good life (including a tasty hunk of lamb) will be at Papa’s Taverna as it celebrates the Orthodox Easter. This is by far the most important holiday in the Eastern Orthodox religion, and the festivities bear that out.

“Oh, there is nothing else like it. It is the type of thing you remember all your life,” Papa says, recalling the Easter celebrations of his younger days in Greece. “All the families would go out and find an empty area by the street and cook a whole lamb out there on a spit. And then anyone who walks by, they have to taste a piece of your lamb. Also, back then, families would make their own wine. So everyone would take a taste of everyone else’s wine and the lamb. And then we would get so full and tired and just lie down on the grass.

“It was beautiful, beautiful. To be lying there, with all your family and friends around you, and everyone eating and drinking and having such a wonderful time. What can be better than that?”

The Easter celebration at the Taverna will be “just like the ones we have in Greece,” Papa says. A whole lamb will be cooked over a spit outside. There will be plenty of wine. And if you want to lie down on the grass, you’re welcome to it. The restaurant is on a spacious piece of property next to the Petaluma River. Some customers arrive by boat. The dock has been in use since the mid 1800s when this location was known as Donahue’s Landing.

Papa is only 60. But when one is confronted with the prospect of dying soon, life has a way of becoming more intense: Papa has been living with the threat of dying young ever since he was 27 years old.

At that time, his kidneys failed, probably due to an injury he received as a professional soccer player. The doctors gave him two to three years to live. “And then after three years, they gave me another two years. And after I lived another two years, they gave me another few years. That’s been going on for more than 30 years now.” Three years ago, Papa received a transplant and no longer has to go in for dialysis three times a week.

“I broke all medical records,” he says with more than a hint of pride. “Everything I do, I always try to do the best–even being sick. No one thought I would be around this long, except for me. I knew I would live, and I didn’t listen to the doctors. You have to believe in what you know and not what everyone tells you.”

Stories of the medical miracle spread, and some people started thinking of Papa as a psychic healer. He began getting calls and visits from ill people looking for help.

Lana Sutton, Papa’s life partner, tells about a man “who came to the restaurant, and he was leaning quite heavily on his cane. You could tell he had a difficult time walking.” The man asked to speak with Papa, and the two of them went off for quite some time. “When they were done,” Sutton continues, “this man came over to the counter and handed me his cane and said he wouldn’t be needing it anymore. Just like that. And he just walked out, on his own.”

When asked what he told the man with the cane, Papa just replies, “The truth.”

Sutton says she still keeps the cane behind the counter. And if she spots Papa looking at a pretty woman for too long, she uses the cane, vaudeville-style, to loop it around his neck and tug him over to her.

Even more than being a healer, Papa has earned a reputation for being an advisor. Staring down death all these years has made him quite philosophical about life. Plus, he says, “Greeks are natural philosophers. We have the DNA for philosophy.”

So it’s little wonder that people turn to him as they would a wise elder. “I’m everybody’s grandfather,” he says. “A lot of people come to me for advice. If someone wants to get married, something like that, they come talk to me and get my opinion.

“I always tell them what I think: the truth. But I also tell them there’s a reason they have two ears. They can let other people’s opinions in through one ear. And then, if they want, they can let those opinions out the other ear.”

Some people come to the restaurant looking for advice about marriage. Others come looking for a good meal, and they end up getting married.

“See that women over there?” Papa says, pointing to an attractive brunette folk dancing with the others out on the floor. “She met her husband here. Then they had a little girl, and they brought her over to the restaurant so we could see her right after she was born.” As if on cue, the little girl, now two, runs across the patio once again, followed closely by an older cousin. “There she is! There’s the one!” Papa laughs, as he pretends to grab her.

For Papa, family life and restaurants are a natural combination. In fact, some of his earliest memories have to do with helping out his parents at their restaurant in Athens. “I was just four years old, and I would help them carry the water glasses to the tables. I’d pick up one glass with both hands, and I would very carefully walk over to the table and stand up on my toes and reach my arms up, up high, and put the glass on the table. And people would laugh and cheer. It was wonderful. I have many good memories.”

Papa’s own son, Jimmy Papageorge, 33, was raised in restaurants, just like his father before him. “Jimmy spent 33 years by my side, learning everything,” Papa says. As well as inheriting his father’s recipe collection, it seems Jimmy has also inherited Papa’s gift of gab. “Jimmy is very, very funny,” Papa says. “And he loves to socialize, just like I do.”

Eight months ago, Jimmy Papageorge moved on to his own restaurant, the new Papa’s Taverna on Washington Street in Petaluma. The establishment is more centrally located, and the surroundings are more modern. But, it seems, the old union of food, family, and friends is bound to continue.