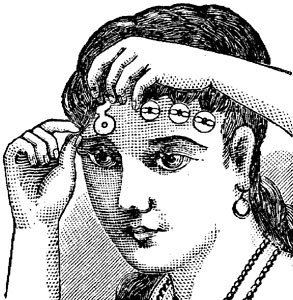 You’re So Vain: Personal decoration can be so rewarding.

It’s what’s on the outside that counts

Perhaps it’s true that when the Garden gate slammed shut behind him, Adam reached for a fig leaf to cover his nakedness. But it’s a darn good bet that Eve touched her bare earlobes, looked down at her naked neckline, and meditatively drummed her unadorned fingers. Picking a stray bit of apple from her hair, she may have snapped, “Adam, find me some silver to wear. If I’m to bear knowledge, menstrual cramps, babies, woetide, and suffering, I may as well look great doing it.” And lo–accessories came into the world, and they were good.

Examine that same scene with an eye to natural selection, and flash to some of Eve’s more challenged offspring. Scrabbling about in the sulfured dawn of human history, early humanity descended from trees in order to scrimp by on the ground barefoot in filthy furs and, it turns out, necklaces. Forget space travel, housing, surgery, and gourmet cooking–surely this marriage of fire with tools found its highest and best use in fashion accessories.

Beyond the glint of the cave fire, jewelry has usually offered a hint to rank, wealth, or perceived lovability. But add the marvelous invention of sunglasses, and you’ve got another revolution: the birth of the cool. What would Jack Nicholson be today without Wayfarers riding above a rakish grin? Grace Kelly, chignon elegantly swathed in a scarf, couldn’t have trod the Riviera with such chic had her eyes been visible to all and sundry.

Once one wades into the large and swimmingly big world of accessories, it appears that most of what we wear, drive, and perhaps even bed, pet, or rear falls into the category of the extra. Because what, after all, is an accessory? As an antonym to “necessary,” perhaps it’s easier to define what it’s not: Not underwear. Not pants. Not shirts, skirts, shoes, shorts, jackets, suits, T-shirts, tights, or dresses. That leaves everything else, including undersized pets, children, bimbos, gigolos, cell phones, cars–of course cars–and the ordinary adornments to face and body.

While we’ve always striven to improve on God’s or nature’s genetic gifts, it is magazine editors who actually determine what makes us well-dressed butterflies or drab, old cows. And what do magazine editors wear? Black. They march down Fifth Avenue in a veritable salute to the absence of color, differentiated only by mastheads and accessories. This one has an A-line haircut and oversized glasses. That one favors heavy silver; another only wears Gaultier; this one’s sold her soul to Paloma Picasso.

So while the peacocks parade down the runways, clad in fantastical guerrilla military/school girl/flaming chanteuse exotica, the people who make the decisions about your external worthiness rely on an unchanging monochromatic costume enlivened solely by this year’s must-have accessory. But unlike magazine editors, who are so awash in free samples and gifts that the only thing they ever have to purchase for themselves is deodorant, most of us can’t afford to upgrade our add-ons each year. All of which means that when most ordinary people fall for a trend, they go hard and stay long.

Look down at your own wrist. If you’ve allowed your eyes to graze a fashion magazine in the last three years, you’re probably now wearing or have worn one of those Zen prayer bracelets that catapulted ordinary agates and cheap lapis beads into a raging “statement.” Perhaps now is the moment to consider: Are you really more serene or just $60 dollars lighter? Those of us sentient in the ’80s covered our forearms with the black rubber o-rings Madonna favored in Desperately Seeking Susan. Hair scrunchies, butterfly clips, baby-doll bobby pins, chokers, toe rings, waist chains, pocket chains, dress clips, anklets, mood rings–a hundred cheap, silver bangles compose a prose poem to money down the drain, flushed away by the vagaries of trend.

More permanent are the drastic-change choices of piercings and tattoos, which last longer than most other good ideas. Isn’t setting yourself apart while fitting in the sneaky, sideways point of all of this? If it weren’t, magazine editors wouldn’t bother with Paloma and heavy silver. They would happily settle–oh, the relief!–for merely enduring the all-black uniform their position demands.

But that wouldn’t be much fun. Personally, I’ve spent the better part of the spring hunting for the perfect camping necklace. A camping necklace, in the event you are unfamiliar with the concept, is one that can be worn without annoyance while sleeping on a packed-dirt scrabble, looks good with a bathing suit, and doesn’t snag Gore-Tex or leave a tarnish around your neck. Where my knowledge of physics or the complete letters of Samuel Johnson should reside runs instead a fiery little pant to finally finding such an item. Some people feel this way about shoes. So do I. Others have a passion for belts. Me too. And still more fantasize in a quietly obsessive way about earrings–I should know.

Surely, were I to be granted some otherworldly slide through the space-time continuum and find myself just a few pages back from the Song of Solomon, I would lift my anguished eyes to the sky and harshly voice the question natural to all fashion-conscious Western women: “Dear good, wise Eve, what have you wrought–and wherever did you get that purse?”