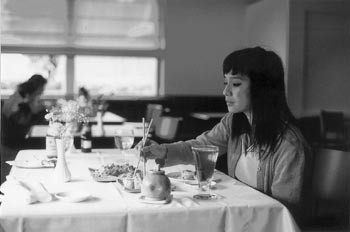 Making It with Maki: While Osake’s sushi is toothsome, the tempura and many of the house specials disappoint.

Osake not much to Chu on

GARY CHU’S NAME is synonymous with gourmet Chinese food in Santa Rosa. For years, customers have flocked to sample both traditional and creative dishes at Chu’s downtown restaurant, which projects a classy, pristine atmosphere several steps above many of the more humble ethnic establishments. Having successfully established this format, Chu is attempting to duplicate it in his new restaurant, Osake, which features Japanese and robata cuisine.

The atmosphere at Osake is also upscale, with a starkly handsome dining room. The silvery gray-green decor is sophisticated and cool–bordering on cold; the very low recessed accent lights are so dim that the green exit sign outglows them. There are no candles, totally bare expanses of wall, a long black curved sushi bar, and a large fish tank near the entrance. A cadre of servers is clad smartly in white shirts and black pants.

Osake has been open only for several weeks, so we are hoping that initial kinks can be worked out. Our first visit was a less than stellar experience. A chilled glass of sake smelled nasty (it was the glass, not the wine); an inattentive, unhelpful server seemed keen to rush us out; and our three-course meal left us so unsatiated that we dashed to the supermarket on the way home for cheese and crackers to stave off lingering hunger pangs. Not good. Especially after shelling out $40 for this fancy Japanese dining experience.

Our second venture into Osake faired better. Our server was patient and attentive, and the glasses were sparkling. But the food was still hit-and-miss.

The miso soup ($2), normally so comforting and life-giving in Japanese eateries, tasted watery and lacked substance; and the potato croquettes appetizer ($4.50) consisted of a dark, overcooked bread-crumb coating containing a smooth, mashed potato filling. Even the pool of mild barbecue sauce could not save the dish from tasting bland.

But the wakama salad of seasoned seaweeds ($4.50) was a winner, delightfully refreshing, cool and green, with spicy accents of chopped red chili pepper. The cold seaweed slivers were satisfying, not at all fishy in flavor and almost meaty in texture–like a vegetarian steak tartare.

Osake features a good variety of sushi. Both nigiri (raw or cooked fish atop seasoned rice) and maki (fish or vegetables rolled with toasted seaweed and wrapped in seasoned rice) are well represented. The sushi is ordered as a pair and prices range from $3 for most veggie, egg, and squid varieties to $9 for the spider roll featuring crispy, tasty soft-shell crab. The sushi was enlivened by sweet bites of exceptionally fresh pink slices of pickled ginger served on the side with a mound of wasabi. However, the sushi morsels were held together with an overly gluey rice that still tended to fall apart.

One of the recommended house specialties is the crispy chicken with daikon ($9.50). This was a disastrous mix of acidic daikon radish (which had a sauerkraut flavor) heaped atop chicken coated in more overcooked and greasy bread crumbs. The chicken was stuffed with apple slices and served on a bed of shredded white cabbage. It was a strange, heavy-handed German-Japanese concoction.

Another specialty, the robata vegetables ($7.95), cooked on an open fire grill, was disappointing. Pieces of sweet corn; slices of zucchini, onion, red and green pepper, and carrot; a couple of mushrooms; a single clove of garlic; a tomato; and a small bit of Japanese eggplant, arrived on slim wooden skewers–each holding one or two of the grilled vegetables. It was a less than generous serving, and no better than something you could whip up yourself on the backyard hibachi.

Our favorite dish of the evening was the grilled salmon with miso sauce ($12). Beautifully presented on a distinctive square plate, the fish was grilled so lightly that the coral-hued flesh remained delicate and moist. It came with a flavorful, semi-salty miso sauce and a portion of expertly cooked Japanese wheat noodles–an exotic and inventive combination.

But the vegetable tempura ($10.95) was a letdown. We were expecting light, crisp, and greaseless morsels. What we sampled were heavy, stodgy, and grease-laden. The veggies had no snap and the batter was too cloying; perhaps the cooking oil hadn’t reached an adequate temperature for frying.

The restaurant has a limited dessert selection. Probably the most exotic item is the green-tea ice cream ($2), which had a mild tea flavor and a rich, heavy texture.

Of course, you could always try a glass of sake for dessert. Nigori ($5 a glass) is a cloudy, country-style unfiltered sweet rice wine. Served cool, it resembles a glass of skim milk and tastes smooth and sweet.

There are 11 premium sakes available, each served room temperature in a chilled glass. Tsukasa Botan ($6 a glass; $60 a bottle) was medium-dry and easy to drink. Name Hage, described as “dry, crispy, and smooth” ($6 a glass; $60 a bottle), was sharper and more of an acquired taste. For those who prefer their sake steaming, there is hot Sho Chiku Bai. There’s also a selection of beers and wines. A Benziger 1995 Carneros Chardonnay ($20) made a pleasing partner to our selections.

Osake also has an adjoining karaoke bar open Friday and Saturday nights where you can warble away for $1.50 per song.