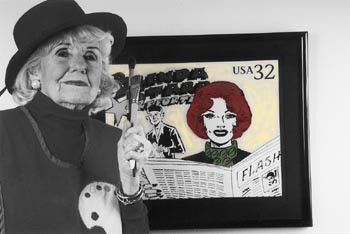 Brush with Greatness: Although cartoonist Dale Messick, 92, can no longer ride it herself, she keeps her gleaming Harley-Davidson motorcycle at the ready in her garage. Sometimes a fellow cyclist will motor her around perched on it.

I’M A HALF-ASSED celebrity–everyone knows Brenda Starr but nobody knows me,” laughs cartoonist Dale Messick. “I still get fan letters after all these years–five or 10 a week. They all want a sketch and an autograph because people collect these things. People collect anything. That’s why I never take my [dental] bridge out–they might collect bridges!”

In June, Starr will be 57 years old, but thanks to the disparity of cartoon years vs. human years, she looks little older than she did when she tumbled full-grown from Messick’s imagination. Likewise, her spry and delightful creator appears only a fraction of her 92 years.

In her characteristic deadpan, Messick downplays her accomplishment.

“The only remarkable thing that I think I did was that I was married twice, divorced twice, had a horrible automobile accident that almost killed me, had a baby, and in 43 years never missed a deadline.”

A Hoosier born in South Bend, Ind., just days before San Francisco’s 1906 earthquake, cartoonist Messick has resided in Sonoma County near her daughter and granddaughter since the death of her husband several years ago. The walls of her Oakmont home are strewn with awards, plaques, and photographs of conventions at which she was honored. The Redwood Chapter of the California Writers Club recently named her an honorary member, and in April the National Cartoonists Society will present her its version of the Oscar.

Displayed on a far wall of her art studio is a poster-sized blowup of the postage stamp the U.S. Post Office issued to commemorate her comic strip. Of the dozens of early cartoonists so honored, Messick is the only one still alive and the only woman.

Raised by artistically inclined parents in a cultural region that little valued artistic expression, let alone that of a precocious child, Messick grew up markedly different from her childhood contemporaries. Profoundly near-sighted, the young Messick couldn’t see the looming face of the classroom clock, slowing her mastery of time-telling at an age when such skills are an important social factor (queries about the time of day still cause her a flash of anxiety). Worse yet, her spelling was atrocious, and she was left-handed at a time when that would earn one a beating.

MESSICK’S ABILITY to draw became an obvious refuge, and the talent she nurtured throughout her school years eventually garnered her a position designing greeting cards at a Chicago publishing house when in her early 20s. Later, in 1933, she migrated to New York and earned a staggering Depression era salary of $50 a week, nearly half of which she sent back to her family in Indiana.

“I had $30 a week to live it up,” remembers Messick of her windfall. “You could walk down 42nd Street and have bacon and eggs and toast and coffee and hash brown potatoes and orange juice–the works–for 25 cents.”

In the late ’30s, comic books began to swell in popularity as the appeal of dime novels and “weird fiction” pulps began to evaporate. Recognizing a possible market threat to their Sunday comics pages, large metropolitan newspapers produced ancillary comic-based publications to safeguard their readerships. To this end, the monolithic Chicago Tribune–the universal appeal of its Dick Tracy and Terry and the Pirates strips notwithstanding–began devising a booklet that required eight new strips.

“This friend of mine in New York gave me the tip about it,” says Messick, who had altered her given name of “Dalia” to the more sexually ambiguous “Dale” in order to thwart the male-chauvinist editors she routinely encountered. “If I sent in my stuff and they knew I was a woman, they wouldn’t even look at it. So, [as Dale] I wrote up a story and sent it in to them. They accepted my comic and gave it the center page. Out of eight unknown cartoonists, I was the only one who survived. That was my big break,” she recounts. “I went into the Chicago Tribune-New York News syndicate and I was the only woman. . . . I never was really accepted.”

A LTHOUGH SCIENTISTS have never bothered to note the event in the annals of astronomical history, on June 30, 1940, a Starr was born. The early Brenda was very much a mirror of her creator’s inspiration–the screen siren Rita Hayworth. Like Hayworth, Brenda was feisty, dauntless, unabashedly sexy, and, as Messick laughingly reports, “had this gorgeous red hair that could go through any sort of adventure and look great.”

In equal parts a soap opera and action-adventure serial, Brenda Starr was immediately embraced by a readership comprised of both sexes, whose tastes seldom went coed in a comic strip. Some male fans, misapprehending Messick’s gender owing to her unisexual pseudonym, even asked the cartoonist for jocular tokens of fraternity.

Says Messick, “I used to get fan letters from guys who requested a ‘daring picture’ of Brenda. Well, you know what they wanted–I had made Brenda very sexy. I’d send them a little sketch of Brenda Starr going over Niagara falls in a barrel and say, ‘I hope this is daring enough.'”

Brenda Starr joined the profusely male pantheon of comic heroes during an era that spanned the Depression, World War II, and the I Like Ike and I Love Lucy-goosiness of the ’50s. Her prosperity was, in part, a product of World War II’s strong female workforce. Like the affable Rosie the Riveter caricature, Brenda Starr was an exemplar of girl power–a white-collar analogue of the buxom factory gal.

In this atmosphere of patriotism and sisterhood, the strip flourished (after all, Brenda Starr did her part for the war effort) and compounded the early success it achieved in the 18 months before Pearl Harbor.

By the time the war ended and women workers were ousted by returning GIs who subsequently knocked them up with the Baby Boom, Brenda Starr was securely fastened to the pages of daily newspapers as far-flung as Australia, ultimately boasting a worldwide readership of 60 million.

“I’ll read strips from 20 or 30 years ago and get hooked. I wrote it, I drew it, and I forgot it. I still say that I have better stories in there than they have on television today,” avers Messick, who has maintained a collection of her entire Brenda Starr oeuvre–15,000 strips in all. “Probably after I’m dead and gone they will discover that and use my stories.”

Hollywood, however, has already heeded Messick’s counsel and in the late ’80s brought a lackluster cinematic version of Brenda Starr to the screen under the aegis of Princess Di’s Starr-crossed beau, film producer Doti Fayed. In a tragic fit of poor casting, Fayed insisted his then-paramour Brooke Shields become Suddenly Brenda.

“She really wasn’t the Brenda Starr type at all,” Messick says of Shields’ performance. “Let me tell you, the movie was so bad it never even won the ‘Worst Movie of the Year Award.’ Don’t see it, it’s awful.”

After 43 years of meeting strenuous deadlines (her strips were drawn six weeks before publication), Messick retired in her late 70s. Brenda Starr continues to be drawn by other artists for the Chicago Tribune-New York News syndicate–an endeavor Messick does not begrudge, though she has no compunction about voicing her criticism.

“Now it doesn’t look like Brenda at all,” Messick contends. “She looks more like she works at a bank. No glamour, no curves, no fashion–but it’s still going pretty good.”

Since her retirement, Messick has developed new strips, including a weekly one-panel series for the Oakmont Gardens Magazine dubbed Granny Glamour. The comic features a saucy senior full of such punchy, homespun aphorisms as “You’re in when your foxy grandpa’s pacemaker opens the garage door.”

“This is all I know,” Messick says simply. “All my life I’ve been creating and drawing. I don’t have much time left–I’m living on borrowed time–so with the few years I have left, I want to do what I want to do and that’s to work in my studio.”

As Granny Glamour says, “When you quit and just sit, that’s it.”