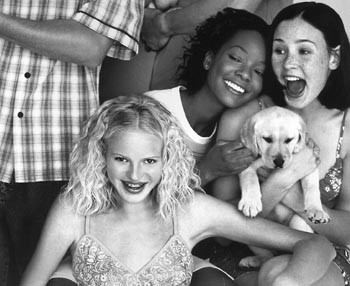 Go Ahead and ‘Jump’: Braces, freckles, and dark skin aren’t fashion liabilities in the world of ‘Jump’ magazine, one of the new rags devoted to the emerging “real girl” market of teens. ‘Jump’ ain’t bad, but it’s not as good as several indie publications.

New mags put the real back into girls’ reality

TRYING TO SEDUCE as many underage girls as possible, corporate publishing has adopted the buzzword “real” as its come-on of the moment. Rightly sensing that there is a vacuum in the teen magazine market–the fastest-growing segment of the population has, like, nothing to read–publishers have dreamed up Jump, Teen People, Twist, and Glossy. Teen People, which hit the newsstands this month, promises “real teens, real style.” Jump‘s slogan is “For girls who dare to be real.” It makes sense that realness should become a market niche–existing teen magazines like Seventeen and YM being so decidedly unreal.

But how much realer is this new crop? Reality is a place where bodies come in all shapes and sizes, and girls have a political, intellectual, and creative life of their own. Despite their pretenses, commercial teen magazines’ reality bureaus are still pretty short-staffed.

Teen People deserves some credit for putting out a model-free magazine. Only a third of Teen People is devoted to fashion and beauty, and it has refreshingly little advice about how to find a boyfriend. Teen People also nods to the not-so-girly girls with profiles of girl sport climbers and in-line street skaters. But it’s a sad commentary on the state of the glossies that these achievements are even worth mentioning, since Teen People is clearly nothing more than a way to hook future People readers on celebrity worship.

Jump, just a few issues old, from fitness-oriented Weider Publishing, is a refreshing paean to the active girl–“stylin’ snowboarders” and girl hockey players fill its pages; nail polishes recommended are quick-drying (which assumes you have something better to do than sit around and fan your nails). Jump clearly has feminist intentions, but at points reads like a ’90s Cosmo: Pressure to be skinny is replaced by pressure to be “buff,” and a plea to girls not to worry about being model-perfect is written by a boy. The message is clear: It’s OK that boys and magazines still have the last word on what makes you sexy.

Twist, a bimonthly just launched by Bauer Publishing, fails at realness even more dismally. It does try to boost girls’ body images: “Do our bellies really need busting?” is an eloquent plea for self-acceptance, and the magazine commendably names “Anti-Waifs” as a “Trend We Love … Finally!” But check out their wussy examples–Jewel, Jennifer Aniston, Neve Campbell–no Janeane Garofalo or, hello, Kate Winslet. Is it too utopian to hope that actresses with real meat on their bones could be presented as sexy icons in a commercial teen magazine? Aggravating as these body problems are, Twist‘s assault on girls’ minds is even worse. We know only one thing for certain about a girl who picks up a magazine: She doesn’t spend every single minute of her life watching TV. So what else does Twist recommend she read? Books that might as well be TV shows because they are: the Party of Five, Buffy the Vampire Slayer, Moesha , and X-Files book series. Then there’s Glossy, a Web magazine newly launched in print, which doesn’t remotely aspire to realness. It makes YM look like the Seneca Falls Declaration.

SO, ULTIMATELY, what’s a girl to read? Luckily, there are a number of alternatives to these mind-numbing infomercials: independently published magazines written by and for teenage girls. These magazines are not only more feminist than their glossy counterparts, they’re far smarter, more racially diverse, and yes, more real.

TEEN VOICES, a national quarterly, takes on issues from teen pregnancy and body mutilation to “Snowboarding on the Cheap!” Articles ask: Was the court decision in the Boston Latin affirmative action case fair? Are cartoons sexist? Do animals have rights? How do you get over shyness? Should you get a tattoo? Teen Voices has a fine mix of politics, personal stuff, book and record reviews, fiction, and poetry. To subscribe, send $20 to P.O. Box 120-027, Boston, MA 02112-0027.

Hues, a feisty, multicultural quarterly, has a high-quality, attractive, innovative layout. A recent issue features “Get on the Bus!,” an account of Philadelphia’s little-covered Million Woman March; “Making It Big,” a profile of a successful and gorgeous 190-pound model who’s outspoken in her criticism of the fashion industry; and a cultural dialogue between two young Indian women about arranged marriage. Hues was recently acquired by New Moon publishing, the creator of the younger girls’ magazine New Moon; it will go bimonthly next year. To get the next six issues, send $19.99 to P.O. Box 3587, Duluth, MN 55803-3587.

Reluctant Hero is a Canadian quarterly with some serious feminist analysis–“Birds do it, bees do it, boys sure do. Why is it so taboo for girls to have a libido?” Reluctant Hero also explores cliques, sexual harassment, and peer mediation, and asks that timeless question that you will probably never see in a commercial teen magazine: “Why Are Girls So Mean?” For more info, e-mail [email protected] or call 416/656-8047. To subscribe, send $19.26 to 189 Lonsmount Drive, Toronto, Ont., M5P 2476.

Though Jump, Teen People , and Twist are a step in the right direction, girls themselves can do so much better. It’s too soon to say for sure how many readers the mainstream newcomers have attracted, but Teen People is reportedly selling like Titanic. The independents don’t attract Gap ads, and, at least in Blue Jean‘s case, wouldn’t even if they could; they need support. Let’s hope the talent behind this girls’ alternative press gets the encouragement it deserves to keep on keeping it real.