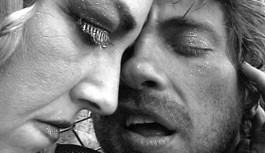 Like jazz, American cinema is easy to pronounce dead. “We’re in such a trough with American movies,” says longtime Bay Area moviemaker Rob Nilsson, sitting outside his unofficial satellite office and regular breakfast spot, Jimmy Bean’s Cafe in Berkeley. “This is a way of opening things up. Opening people up to themselves, opening up the sores.”

The “this” to which Nilsson refers is his own hard-bop-free-jazz hybrid way of making films, as identified in his “Direct Action Cinema” manifesto, which has resulted, most recently, in a nine-movie series called 9 @ Night. After its recent West Coast premiere at the Roxie in San Francisco, the series comes to the Rafael Film Center for a week-long run beginning Sept. 5. It is an event.

“There’s a certain democracy in jazz,” Nilsson says, “but, yes, you have to be able to play. If you can’t play, you can’t be in a jazz combo.” What he means is that a certain standard of practiced rigor is required in filmmaking as in music—but, importantly, what’s also required is an appetite for the human experience.

Consider his own. In 1990, Nilsson delved into San Francisco’s Tenderloin in search of his vanished mentally ill brother, wound up recruiting a troupe of amateur actors there, right from the streets, and emerged more than a decade later with an interlocking series of dramatic feature films about life among the hobos, hookers, strippers, addicts, thieves and everybody else who’s ever bottomed out in the inner city. “Cinema of the forgotten,” he calls it.

“You go to the poorest places, and you find the most sublime art. It’s because people don’t have much left to lose. They can’t be bought off.”

Nilsson recalls first purposefully roaming through the Tenderloin while editing his feature Heat and Sunlight, which went on to win the Grand Prize at Sundance in 1988. Fresh from that victory, he had plans for what might have been a commercially formidable film about a homeless Vietnam vet, with Danny Glover, Whoopi Goldberg and Samuel L. Jackson attached. What came to pass instead was Nilsson’s Tenderloin Group (a “contentious, improbable, multitalented, dysfunctional, brilliant, long-suffering and unlikely family”), whose weekly workshops renewed Nilsson’s cinematic prospects and kept him working, and inspired, for years. In other words, the perfect combo.

Their efforts epitomize what Nilsson terms his “Direct Action” method, in which the players invent their dramatic situation and inhabit it collaboratively, with each movie shot hand-held on video and in black-and-white, unscripted and stripped all the way down to its emotional core.

An old loner poet and Beat-era hanger-on gets himself and a friend kicked out of their flophouse just by having a stroke (Stroke). A chop-shopper learns he’s HIV-positive and has to hide out from his vengeful girlfriend among the homeless people he reviles (Attitude). A biker sleeps in filthy alleys just to show his cop father that he can (Scheme C6). The list goes on, 14 hours worth of dozens of characters’ crisscrossing lives, presented with a kind of unvarnished lyricism that’s all the more true and moving for being so raw.

Although arguably revolutionary, the modus operandi of 9 @ Night actually is quite straightforward. As Nilsson puts it, “You have to get down to the ground, with the people.”

“Nobody wanted John Cassavetes,” Nilsson says of the filmmaker to whom he is often accurately but reductively compared. “He opened up a window: Why don’t we look in wonder or in horror at the world? I thought, ‘Wow, at last a chance to get out of this Hollywood way.’ When I saw [Cassavetes’] Shadows, I was bowled over. I thought, ‘Oh, my God. You mean it can really be about us?'”

Even beyond what he calls the “awful liturgy” of Hollywood, the presumed alternatives, too, tend to strike Nilsson as excessively politicized or otherwise solicitous. “A lot of people feel they’re being had,” he says, whether by the evangelical right or the left’s “airy-fairy good-for-ya crowd. I don’t like documentaries that are telling you what it is. I prefer to experience it, not to be told.” Or as the Direct Action manifesto would have it: “Discover, don’t prescribe.”

Considering 9 @ Night’s topically relevant credentials—lo-fi and DIY, organic and locally grown, deeply concerned with the disadvantaged—one might worry that the project is also impossibly, tediously chic.

But the movies’ lack of affectation only magnifies their power. Nilsson’s mandate remains simply, as he puts it, to “seek and find the miracles of the ordinary.” That means, on any given movie, his goal is to make it “just so plain, you hardly think it’s a movie,” and that it should be “an experience rather than something that’s supposed to be about something. It’s not there to please, to cajole and say, ‘Hey, like me.'” As such, he allows that he’s not exactly going to get rich or famous making these kinds of movies. “The films have a special meaning, not recognized in the market,” he says.

Lest Nilsson come across as the lone artiste, striving earnestly and pretentiously in obscurity, it should be reiterated that his work is deeply collaborative. Another of the manifesto’s take-away ideas: “Film is not a director’s medium. The magicians who bottle the genie are the actors. The magician who lets the genie out of the bottle is the editor.” And, as he likes to say in reference to his fellow magicians, “nowadays, everybody’s ‘independent.’ Independent of what? We’re dependent on each other, happily so.”

Nilsson also has harvested similar community-based films through Direct Action workshops in Japan, Jordan and South Africa. And he doesn’t want for work at home—given an hour of conversation and alert observation, he’ll even start finding stories on the street corner right outside his favorite Berkeley cafe.

But 9 @ Night is a major achievement worth recognition, a love supreme. Taken together, the rough-hewn, enduringly soulful 9 @ Night films make a vital contribution to the cinema of America or anywhere, suggesting that maybe the reports of its death have been greatly exaggerated.