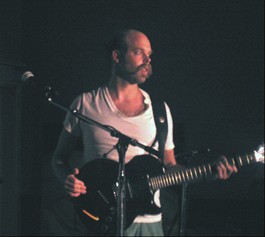 Can the city of Santa Rosa make a zoning exemption for this beautiful venue? Please?

One month after the city of Santa Rosa changed the zoning code to make it harder for all-ages venues to open downtown comes the disappointing news that the Orchard Spotlight, a historic church and acoustic performance space, has been forced by the city to cancel all of its upcoming concerts. The music has been quiet. The attendees have been well-behaved. The neighbors haven’t complained. So what’s the deal?

Last week, the Orchard Spotlight hosted Will Oldham, aka Bonnie “Prince” Billy (above), an underground legend who drew a large line on the sidewalk causing a nosy tipster driving by to notify the city. “It wasn’t like they were even complaining,” says Spotlight co-owner Linda Rose-McRoy, “they just called with an inquiry, saying, ‘We saw this line outside of 515 Orchard. We wondered if that was OK.’ Like, duh!”

Rose-McRoy and co-owner Cheryl Ulrich met soon after with the Community Development department and were informed that the Orchard Spotlight violates the area’s residential zoning. “We’ve known for a while that there were going to be some zoning questions here,” says McRoy, mentioning certain loopholes to stay loosely legal—registering on the internet as a church, for example, and holding “mass” at 8pm on Friday and Saturday nights. “But Cheryl and I are the kind of people who don’t like feeling we have to continually look over our shoulder,” she adds. “But we’re also not giving up.”

What’s exciting is that “not giving up” involves working with the Arts District and the city council to get a variance in zoning to allow entertainment at the venue. Vicky Kumpfer, coordinator of the Arts District, thinks it’s possible. “This is really an interesting opportunity to try to make this viable, and to work within the law,” says Kumpfer. “Yes, we have these laws, but is there a way that we can have a certain exemption?”

What the issue comes down to, then, is the neighbors, and so far, the Cherry Street neighborhood association has been supportive of the Orchard Spotlight. If that continues to be the case, and if the city is willing to honor its general plan guideline to “consider the diverse cultural needs and talents of the community,” we may see the Orchard Spotlight rise again. “It’s just gorgeous,” Rose-McRoy says of the space. “It’s so moving, because it was built in redwood, for sound, for the human voice! I love it. It just makes me tingle all over. And so we’re not giving up.”