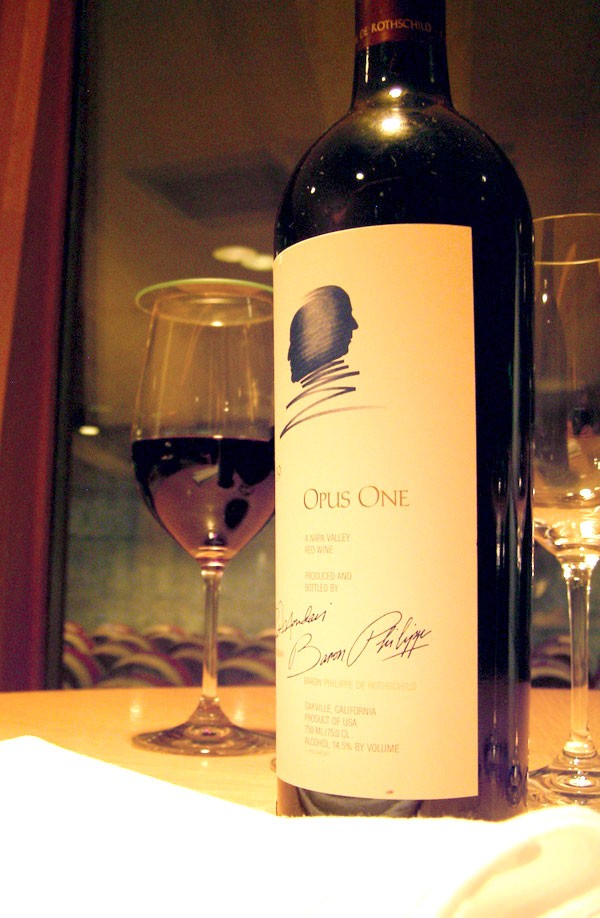 I really had no idea about Opus One until the late 1990s, when my Sonoma-centric viticulture instructor derided the way the estate’s petite grapevines were trained low to the ground, as seen in Margaux. They’re roasting in the sun over there, he pointed out—and imagine the back injury!

But later a coworker of mine praised it: “I only drink Cabernet Sauvignon,” the 19-year-old gushed. “Opus One. It’s the best.” Napa hubris or last word in luxury? Intrigued, I made an appointment to see for myself a scant 15 years later.

Opus One stands out mainly for not standing out. Half-buried under an earthen mound, crowned by an airy pergola, the look is low-profile, high-style. In a neoclassical courtyard, chamber music plays from disguised speakers in a grove of olive trees.

There is no tasting bar—not at first glance. Tour groups meet their guide in the antique-furnished Salon, savoring a pour of entry-level Overture ($80)—which is not, we’re told, made up of inferior lots that didn’t make the Opus One cut—while getting briefed on the story: When Baron Philippe de Rothschild met Robert Mondavi at a trade conference in 1970, he got an idea. Eight years later, the baron, who had transformed Château Mouton Rothschild decades earlier, formed a partnership with California’s upstart wine royalty to make a single, Bordeaux-style estate wine. Today, Opus One maintains sales offices in Bordeaux, Tokyo and Hong Kong, where it enjoys particularly high prestige.

Our guide was knowledgeable and flexible—he can talk root stock taxonomy, if that’s what you really want. On the crush floor, fancy-toy viewing includes dual oscillating paddleless destemmers and computerized air-jet grape ejectors. In the mood-lit cellar, perfect, red-striped barrels rest in arcing rows—there are no stacking, honking forklifts in the Opus One sanctum.

After all the buildup, I expected an extended sit-down, our guide expounding, and then guests gurgling and enthusing. That’s how these things usually go. But no. We got our pour, thanked the guide, and everybody took a hike. The rooftop patio is a popular spot to drink in the view, while Opus is available by the glass and off-sale in the Partners’ Room below. And? The 2009 Opus One Cabernet Sauvignon ($225) is pretty good—wet cigar, medley of dark fruit, lingering pencil lead aftertaste. And if you want to know if it’s absolutely better than the rest of the high-priced Cabs now sold in this valley, there’s an easy way to find out: just ask the folks confidently smacking down their credit cards for another two cases in the Partners’ Room.