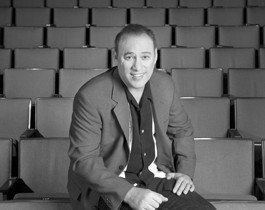 In the opening moments of Rick Reynolds’ enjoyably self-obsessed one-man show, Only the Truth is Funny: Mid-Life at the Oasis, the semi-reclusive stand-up comic-turned-performance artist deftly relates his three rules for a happy and contended life.

No. 1: The knowledge that you were loved as a child.
No. 2: The belief in a benevolent God.
No. 3: Participation in a loving romantic relationship.

Possession of all three of these elements, Reynolds says, is a guaranteed shot at a life filled with good things; two of them is still better than most people; and even one of them gives you a step-up toward some semblance of contentment and happiness. Without any of these, Reynolds believes, you are pretty much screwed. This established, he goes on through the bulk of a brisk and funny 90-minute show—currently running at Cinnabar Theater in Petaluma—to relate why none of these all-important ingredients exist in his own life: he was unloved as a child, is solidly atheistic and was divorced almost a decade ago (and hasn’t gotten laid for six years). Yet he still goes on to end his show on a huge up-note, with a common-sense road map to finding true and lasting happiness—no matter how screwed up one’s childhood might have been.

The original Only the Truth is Funny, the show that made Reynolds moderately famous in the 1990s, was a then-pioneering blend of stand-up comedy and frank personal confession. The show played for years in San Francisco before moving on to Hollywood and Broadway. Reynolds followed it up with another show, All Grown Up . . . and No Place to Go, which was adapted into a short-lived television series. For the last decade or so, Reynolds has been writing screenplays and television pilot scripts, keeping a low profile at his Petaluma home. Several months ago, on off-nights at the Cinnabar Theater, Reynolds began workshopping a new version of Only The Truth is Funny, folding in new material with the aim of taking the revamped show on the road again, perhaps even back to Broadway. This summer, he’s back at Cinnabar with another run of an even tighter, funnier and more philosophical script, with a name that reveals the ongoing evolution of the show (the addition of the catchy, if slightly too-cute Mid-Life at the Oasis).

Leaner and meaner, the new show has further honed Reynolds’ patented comic-laid-bare monologue style, delivering a show that almost seamlessly flows from stand-up shtick (like his classic lounge-singer-paralyzed-from-the-neck-up bit) to true-life storytelling (Reynolds displays one of the ski masks his bank-robbing step dad knitted while in prison) to snarkily intriguing philosophical observations (if you think Reynolds is pretty good looking, you are probably not such a prize yourself). This new show is also brisker and performed without intermission. Fans of the original show will welcome the news that all the most talked-about bits are still in place, but the show is much fresher with the additional new material, smidgens of which have been borrowed from some of his other shows. The highlight of the night, and its surprisingly uplifting heart, is the moment where Reynolds lists all of the things that make his life worth living. It’s an inspiring roster, reminding us that in order to enjoy our lives, we need not have grand daily adventures or achieve great things. We need only recognize those things that give us pleasure.

Always adept at thinking on his feet, Reynolds keeps loose enough on stage to sometimes improvise, reacting to front row facial expressions with wry commentary on the make-up of his audience. On a Thursday night last week, he even turned a slip-of-the-tongue (replacing the word “partner” with “FARTner”) into a hilarious tangent (“It’s sad when the biggest laugh of your show is a mistake!”).