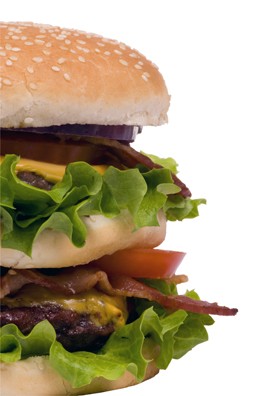 My Beef With Meat

If it has a face, it probably gobbles up global resources along with its grass

Last month, the federal government released a much-anticipated report on global climate change. It paints a chilling picture of what will happen if global warming continues unabated. “This report is a game-changer,” said the new director of the National Oceanic and Atmospheric Administration, Jane Lubchenco, at a press conference last week. “I think that much of the foot-dragging in addressing climate change is a reflection of the perception that climate change is way down the road, it’s in the future and it only affects certain parts of the country. This report demonstrates in concrete scientific information that climate change is happening now, and it’s happening in our back yards.”

The report, issued by the U.S. Global Change Research Program, compiles work from 13 different government agencies. In a refreshing break from the science-averse Bush administration, the report states unequivocally that climate change is human caused. The report details changes scientists are already seeing and predicts how the climate will change if greenhouse-gas emissions aren’t curtailed. The report also discusses how decisive policies can roll back the impending doom. (Read the report at globalchange.gov.) Here are two of the key findings:

• Climate changes are under way in the United States and are projected to grow. These include increases in heavy downpours, rising temperature and sea level, rapidly retreating glaciers, thawing permafrost, lengthening growing seasons, lengthening ice-free seasons in the ocean and on lakes and rivers, earlier snowmelt and alterations in river flows.

• Agriculture is considered one of the sectors most adaptable to changes in climate, but increased heat, pests, water stress, diseases and weather extremes will pose adaptation challenges for crop and livestock production.

There have been many reports on global warming and dire predictions from respected scientists. So far not much has changed. I hope that President Obama uses the power of his position to spur the dramatic and speedy action needed to reduce the profound impacts of the crisis. The challenge Obama faces is convincing people that the time to change our ways is today, not tomorrow. The trouble is, we don’t usually realize we’re in trouble until the roof starts caving in. For example, only when we faced global financial meltdown did world leaders act. A global recession is real and painful, but compared to the apocalyptic effects of unchecked global warming, it’s but a pinprick.

What does all this have to do with food? Well, while the U.S. government appears to be finally getting serious about acting against global warming, we the people need to do as much as we can. Food strikes me as particularly target-rich as we seek to reduce global warming. I see reducing our consumption of meat as the single most important action we can take as individuals. I’ve come to view a double bacon cheeseburger as the culinary equivalent of dumping dirty motor oil into a clear mountain lake. If eating burgers was only detrimental to those who eat them that would be one thing, but the production of meat and dairy across the world is an environmental catastrophe.

I’m a firm believer in spending more for quality, food included. But eating well shouldn’t be prohibitively expensive. I guess it’s all in how one defines “eating well.” For me, that means little or no processed food and plenty of fresh produce in season. Food is of course a necessary expense, but there’s a lot of discretion on how to spend your food dollar. But the ironic thing about food when you buy fresh, unprocessed ingredients and cook for yourself rather than opening a can or box, eating well generally costs less. At least that’s my belief.

According to the United Nations’ Food and Agriculture Organization (FAO), livestock production generates nearly a fifth of the world’s greenhouse gases, more than transportation. Animal agriculture is the leading source of methane and nitrous oxide emissions, which–combined with carbon dioxide–are the primary causes of global warming. Livestock production accounts for more than 8 percent of global human water use, the FAO says. Evidence suggests that it is also the largest source of water pollution thanks to animal wastes, antibiotics, hormones, fertilizers and pesticides used for feed crops, and sediments from eroded pastures. An estimated 30 percent of the Earth’s ice-free land is involved in livestock production. Approximately 70 percent of previously forested land in the Amazon is used as pasture, and feed crops cover a large part of what’s left.

Eating organically raised, grass-feed beef is a far better option than the factory-farmed garbage that most of us eat. But organically raised or not, livestock still sucks up scarce natural resources and contributes to global warming. I’m not saying we should give up meat entirely. Just eat less of it. Given the severity of the climate crisis, reducing our consumption of meat is a painless step everyone can take. What if President Obama declared he was willing to go without meat a few days a week for the sake of the planet? I’m not holding my breath for that one, but more often than not I’m going to hold off on eating meat.