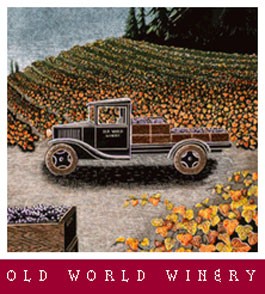 Surely the quirky name evokes a simpler time when grapes were trodden under bare feet, while the label’s vintage flatbed truck backed by redwood trees suggests deep roots in the New World—west Sonoma County, specifically. Old World Winery disappoints this mashup on neither account—and the wines are a nice surprise, too.

Growing up in the Martinelli family, Darek Trowbridge worked the vineyards from his late teens. He later earned a masters in winemaking, but like artists who delved into primitivism only after mastering modern perspective, he chose to make his own wine in what is called the natural way: with native yeasts, no enhancing additives, and minimal sulfur. Even heating and cooling are achieved via sun and shade. “Natural wine” is thus far largely an urban-wine-bar phenomenon that relies on European imports. But Trowbridge is no ideologue and can explain in detail why his techniques create the kind of palate he is looking for. Another Old World aspect is that the proprietor lives onsite and is likely to be the host pouring. Fun fact for New World wine buffs: the humble winery shed was the original spot rented by Burt Williams and Ed Selyem, in which they made the Jackass Hill Zinfandel that put Martinelli vineyards on the radar.

Who would guess that for such a quixotic project, the standout wines would be Chardonnay and Cab—for different reasons. The 2008 “Tweek Block” Chardonnay ($20) brings me back to the crush pad: wild aromas of grape skin and spice, owing to an unusual full-day’s soaking prior pressing, with cashew nut and (pleasant) volatile notes, prepare the palate not in the least for an explosion of bright green, Granny Smith apple flavor. Hard to believe there’s 100 percent new oak on this, it’s so vibrant and atypical of the butter-on-fire set.The unique 2006 Sterling Family Vineyard Pinot Noir ($32) sports pine sap, rosemary aromas, with lean flavors of pomegranate; licorice and chocolate liqueur on the 2005 Rockin’ R Ranch Syrah ($25). The juicy 2006 Two Vineyard Field Blend ($28) is made in the traditional all-grapes-in way, and is rich with hints of dried dates, plums and dark toast. But a Sonoma Coast appellated Cab? I was prepared for a curiosity indeed.

Hailing from a hot spot up in the Cazadero’s “banana belt,” the 2004 Bei du Rochi Cabernet Sauvignon ($28) offers up the purest blackcurrant Cab aromas, with dark berry liqueur, chocolate and spice, while lithe acidity wraps the flavors with soft tannin tightly to the finish. It’s reminiscent of some of the better product off the western slope of the Mayacamas and might stand its own against a good many twice, thrice the price. In any case, pretty darn classy for a wine trod underneath a bunch of bare feet.