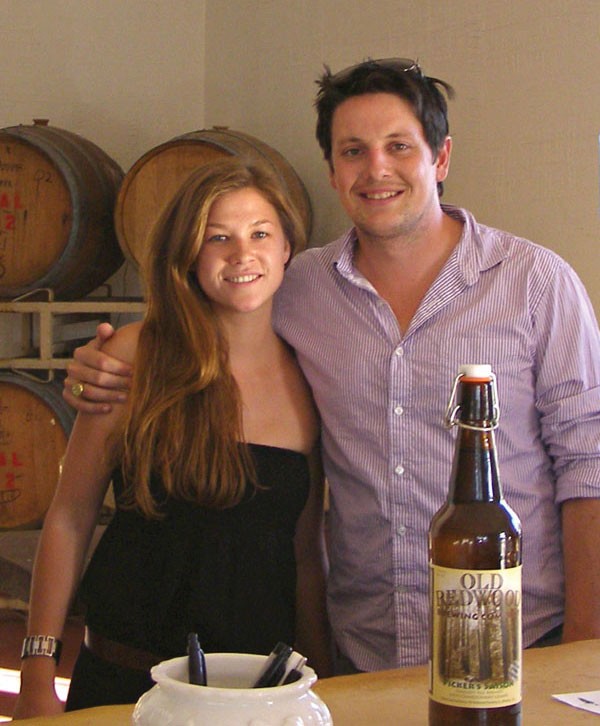 On holiday from the grape

Today in Old Downtown Windsor, the pop-up development styled equal parts Mediterranean, Mayberry and Old West, there’s more than tumbleweed drifting down the street. This morning, the sweet smell of beer mash wafts down the street. In a prime corner location across from the train station—where, say, a saloon and hotel would be in a real back-lot set—four partners on the frontier of nanobrewing have set up shop.

“We got an awesome deal on the rent,” says Robert Anderson, while brewing a new batch in the humid, one-and-a-half-barrel brew room. Good thing, too, because the front of the house, run by friend Adam Derum, is spacious but furnished only with a small bar, bar stools and a few barrels. This is no brewpub, not even in the making. Old Redwood is built on the winetasting model and geared toward signing up beer-club members, who receive a new release each month, bottled in 750ml, flip-top bottles.

No surprise, cofounder Dominic Foppoli is brand manager of his family’s several wineries and adept at networking with other local tasting rooms. A recent afternoon found Foppoli, behind the bar, trying to set up a group of women on a winetasting tour while they, in turn, thrust iPhones over the bar, trying to set up the 30-year-old with a likely prospect. Co-brewer Mike Stewart rounds out the team.

Anderson and Derum, both from Sonoma County, didn’t meet until they were assigned the same dorm in military training, in 2000. Back home after several tours, Anderson tried his hand at homebrewing. Luckily, the first batch went well. Self-taught, he’s scaled up to a one-and-a-half-barrel operation successfully; in September, they ran out of beer. “It’s all fun and games until you try to make a business out of it,” he laughs. They reopened mid-October.

The Windsor Wit ($23) is dry and pale pink, lightly flavored with fresh raspberries. The Compromise ($13) (so-called for the brewers’ meeting in the middle of their favorite styles, Belgian and IPA), served up in a mini-Belgian style glass, has a fruity hop aroma, sweet body with shades of apricot nectar and a bitter hop finish. The Highway ($19) is a robust, nutty, malty IPA, while the caramel and chocolate-flavored Fortress imperial stout ($22), is spiced with a good helping of piney hops. These brews are diverse, flavorful, and well-made And a darned refreshing break from wine.