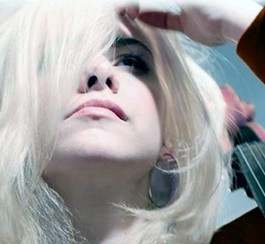 Nellie McKay does everything well

Nellie McKay may have artistic ADD. The singer-songwriter, who performs at the Mystic Theatre on Aug. 18, doesn’t just write songs. Recently, McKay has acted on Broadway and in the movie P.S. I Love You, shown up in rap videos on YouTube and written book reviews for the New York Times. This is on top of recording three albums of her own music, most recently Obligatory Villagers, released last September.

“I’m jack of all trades, master of none, you know,” she said in a recent phone interview. “I have a short attention span. I wish it wasn’t so, truthfully. But there are two ways to approaching something creatively. One is to focus on the good stuff and aspire to be like that. That’s the depressing way. The other is to focus on all the bad stuff and pat yourself on the back when it comes out OK. That’s my approach.”

Musically, McKay jumps around in style as much as she jumps around in projects, touching on jazz, Broadway, pop, lounge and even hip-hop. The connecting tissue throughout, aside from her jazzy voice, is her sense of humor. McKay is rarely serious, even when she’s addressing serious issues like sexism or gay marriage. Sometimes her songs are downright silly, like “Zombies,” about, well, zombies. Others are sarcastic, like “Mother of Pearl,” which starts out, “Feminists don’t have a sense of humor / Feminists just want to be alone (boo-hoo) / Feminists spread vicious lies and rumor / They have a tumor on their funny bone.” Though the song is about how people stereotype feminists, McKay’s tongue-in-cheek delivery can confuse people into thinking she’s being sincere.

“When we did [that song] on Garrison Keillor’s Prairie Home Companion, he got so many angry letters,” she says. “And when I played a NOW concert, the lady who was introducing me read some of the lyrics of that song out loud and people in the crowd went, ‘Oh, that’s terrible.'”

At 26, McKay dyes her hair silver-screen-movie-star blonde, wears vintage clothes and talks fast, mixing hard-boiled wisecracks with breathless girlishness. (“Oh!” she exclaims in the middle of the interview. “There are people singing on the street right now!”) There are contradictions even in the people she emulates. One of her heroes is the 1950s ever-virgin Doris Day, an odd choice for an outspoken feminist. McKay, a vegan and member of PETA, admires Day’s commitment to animal rights.

“And musically, I loved listening to her,” she says. “She had a lovely, lovely, lovely voice. It’s an underrated voice. And she had a freshness and an innocence that is projected in her image and all her movies that is lacking culturally, nowadays.”

Given McKay’s distinctiveness, it’s no wonder that her stint with a major label was doomed. In 2003, she signed with the Sony/Columbia label to record her first album, Get Away from Me. McKay lobbied aggressively for a double disc CD instead of the 13 tracks Sony wanted. The label gave in, but when the next album came along, they were adamant that she stick to a 16-track disc. McKay wanted to record a 23-track double disc, and a standoff ensued. In the end, Sony dropped McKay from the label and the album, Pretty Little Head, came out on the independent Black Dove label.

“So many difficult artists you hear about aren’t really being that difficult,” McKay says. “The only reason I wanted a 23-track is because there is such a length of time between releases, you have to sit on stuff. It would have been years before I would be releasing another album, and by then there would be more songs piled up. I wanted to get it out there.”

In addition to touring, McKay is writing the music for the Broadway musical version of Election, the 1999 movie with Reese Witherspoon and Matthew Broderick. But her approach to writing the music is haphazard, she claims.

“Generally, I’m more and more clueless [about writing songs],” she says. “Mostly, you hope that when something comes in part, it will develop into something full. Then when it only develops in part, I kind of give up. I don’t have a working process. It’s a problem. Some people turn to liquor.”

This isn’t just modesty. When asked, McKay can only name a handful of her songs that she likes. Whatever she does, it seems, McKay is her own worst critic.

“But the songs seem to mean something to some people, which is one reason to keep making records,” she says. “There’s a lot of schlock that gets put out there, you know. I have written some schlock, too, and people seem to like it. I guess that means I have some schlocky friends.”