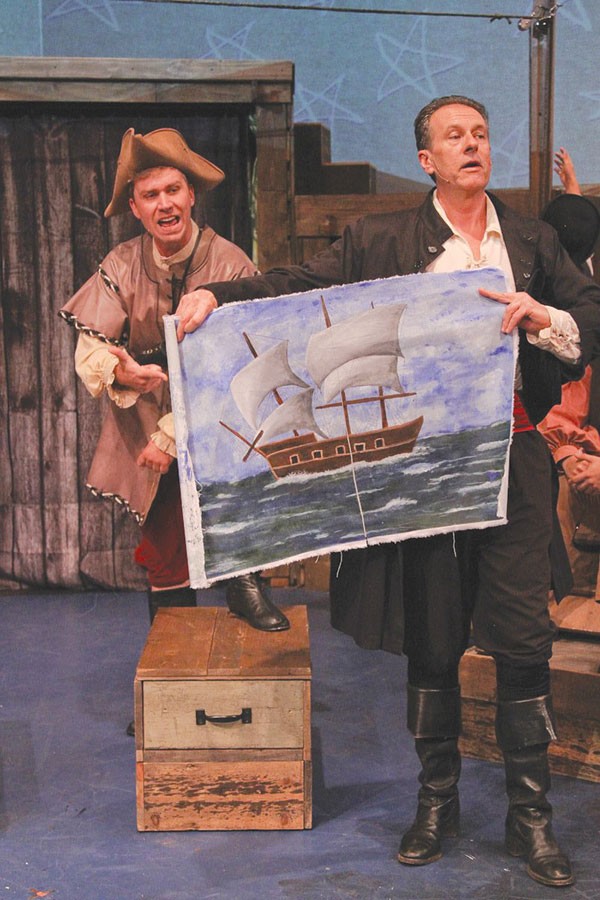 Of Pirates and Elves

“If you’ve ever been to the Dickens fair and seen one of their wacky adaptations of some classic story,” says actor David Yen, director of Spreckels Theatre Company’s Peter and the Starcatcher, “then you’ll recognize the fast-and-furious approach to storytelling that happens in this show. It’s hard to tell what’s in the script from what’s been invented on the spot. It’s crazy!”

Based on the young adult novel by columnist Dave Barry and mystery writer Ridley Pearson, the play—with a goofball, pun-strewn script by Rick Elice (Jersey Boys)—serves as a kind of prequel to James Barrie’s classic play and novel Peter Pan.

The Spreckels production features Larry Williams as the tongue-tangled pirate Black Stache (better known as Captain Hook), Chris Schloemp as Smee and Anderson Templeton (full disclosure: he’s my son) as the Boy, long before he takes the name of Peter Pan. The show has been given a decidedly Christmasy vibe, with a prologue involving a tree and presents and a pivotal lump of coal. Though the script provides room for improvisation, Yen says that he instructed the cast to resist the urge to include jokes referencing the recent election or other political concerns.

“This needs to be a play people walk away from feeling inspired and hopeful,” he says, “a play people are touched by, touched by the humanity and heart of the script’s conflict between growing up and staying young forever, between having a family and a home, and having to become an adult—and everything that might mean—in order to get that.

“Yes, it’s a very silly, strange story, with fart jokes and outrageous gags, but it’s also a very touching story. I think we all need this right now.”

While preparing Peter for opening night, Yen has also been gearing up to play Crumpet the Elf in the dark one-actor-comedy The Santaland Diaries at 6th Street Playhouse. This will be Yen’s ninth consecutive production of Santaland, based on David Sedaris’ wry memoir of working as one of Santa’s helpers at New York’s Macy’s department store.

“People won’t let me stop doing this show!” Yen laughs. “Though, honestly, if it wasn’t still fun, after nine years, I’d have stopped doing it. But Santaland really is a total blast to do.”