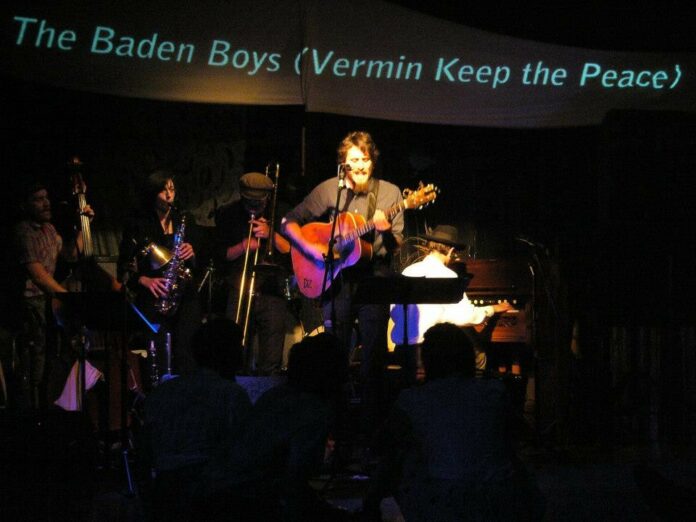 Nov. 30-Dec. 16: The Ratcatcher at the Imaginists Theater 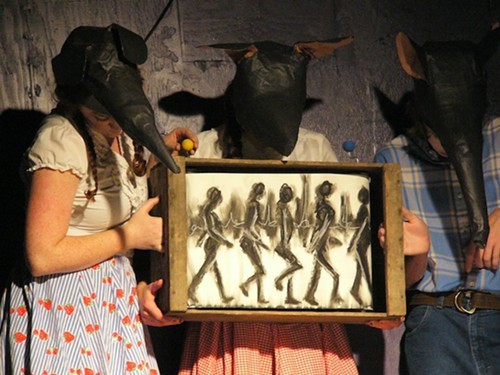 The Ratcatcher, playing through December 16 at the Imaginists Theater is a rollicking, slyly critical musical ride through the mysterious, ancient tale of the Pied Piper. As a refresher, the Pied Piper is the story of a man who arrives in the town of Hamlin, announcing that he can take care of a rat infestation for a small fee. The town council agrees and the man begins to play his flute. The rats follow him straight to the river where they drown. When the Pied Piper returns to the town for his pay, the Mayor refuses to pay him. The piper leaves the town, threatening to wreak revenge. When he returns sometime later, he again plays the flute, this time to devastating results, leading 130 children to either a mountain or a river (where they drown like the rats) depending on the version told.

Taking the Piper as inspiration, the Imaginists have created an entirely new and original production, made all the more interesting by a collaboration with The Crux, the North Bay band fronted by Josh Windmiller. The Hamlin town council, a dictatorial party of three, is obsessed with all things pancakes and cheese. “This is cheese country!” they declare during one of their many meetings, where committees decide the fate of the “artisan pancake breakfast” and the annual Pied Piper play. I couldn’t help but think of Santa Rosa’s obsession with all things wine country, and how that image and tourist-driven identity sometimes comes at the expense of true art and innovation. At one point, “The Ratcatcher” (played by Windmiller) asks for directions to City Hall and one of the kids points him in the direction of the real Santa Rosa City Hall (just down the street from the Imaginists Theater), describing it was a “weird-looking building.” The play carries this second layer of meaning throughout. Is it parable, or is it reality? In the end, it doesn’t matter. What comes out of the play is a sense of art’s possibility, as well as the price paid when art isn’t honored, or is shut down for the sake of “appearances.”

“It is 100 years since our children left,” begins the original tale. And in this updated version, what stays behind is the subtle warning. If a community doesn’t support art, performance, experimentation and creative thinking, then the children will leave for places where they can find those essential components of life, and most of the time, they won’t come back.

The Crux’s pirate cabaret mood melds perfectly with the play’s subversive, playful energy. It lends an atmosphere that is at once joyous, somber and slightly sinister. Musical theater can be a bit over the top, and cringe-inducing, but The Ratcatcher never veers into this territory. The themes are too real, too important and the music too engaging to fall into embarrassment.

The cast is rambunctious and well-suited for their roles. Brent Lindsay, executive director of the Imaginists, is a dynamic force as the drunken mayor of Hamlin. Layla Musselwhite, as the “Councilperson” is fabulous as a false sophisticate. Eliot Fintushel as the bald-headed, sinister Attorney is at his best when doing physical comedy or on stage singing “The Attorney’s Waltz.” For example, when the Councilperson sings her frisky cabaret song, it’s great fun watching the Mayor and the Attorney doing sexy leg-kicks and hip gyrations in their gray business suits.

The songs, written mainly by Josh Windmiller, are eminently listenable. Dogs Made of Rust (The Mayor’s Ballad), from the second act, sounds like a lost Leonard Cohen b-side. It’s a beautiful, heart-wrenching wallop of a song, as is “The Gate (What the Children Remember),” the only song written by Crux member Annie Cilley. The band is in the midst of an Indie Go Go campaign to fund an album of songs from the play.

All in all, this is a fantastic production, of the type rarely seen in Sonoma County, and not to be missed.

As the Imaginists say, “Come support the integration of the musical and theatrical arts in the North Bay, and have a hell of a time doing it!”