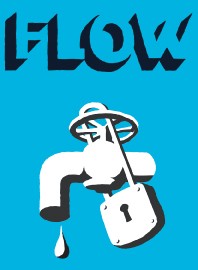 Not a Drop to Drink

French documentary filmmaker Irena Salina’s newest work, Flow: For the Love of Water, is a stark reminder of our many worries, many of them brought to us by the Bad Old Guys from the Bad Old Days. Remember Nestle? Their actions in tricking breast-feeding Third World mothers into using their expensive synthetic formulas still burns hot. And the biggest rub in Nestle’s campaign against poor mothers? The women’s lack of access to fresh, safe drinking water with which to mix that damnably expensive infant formula.

Nestle and the water wars haven’t gone away. Indeed, the company has just quietly gotten stronger, as it and Coca-Cola and large lesser-known corporate entities like Suez and Vivendi team up with two other names from the Bad Old Days, the World Bank and the International Monetary Fund, to corner one of the earth’s last fleeting resources: water. In 84 long minutes, Salina shows how water is being privatized in some of the poorest reaches of the world, trickling out for tokens to people in undeveloped regions of South Africa, blooming crimson with slaughterhouse blood in Bolivian creeks and being dammed for per-pay use along the great swollen Ganges.

But according to the experts in Flow, one needn’t travel to the marigold-strewn shores of India to cluck a tongue. California is estimated to have a 20-year supply of fresh water available. Twenty years. Arizona has just 10 years, and with the golf-course boom teeing off in that state, experts give them really only five years of freshwater access.

We can live without love, W. H. Auden counsels in a quote shown in the film’s opening credits, but we can’t live without water. In Bolivia, one-tenth of all children under five can’t live with the water, so contaminated is it that the infant mortality rate has soared, particularly as the government, intimated by the World Bank and IMF, sold its water rights to the gigantic Suez company in the mid-1990s rather than face the threat of losing its international financing. Founded in the 1800s to construct the Suez canal, the company is now one of the leading water and waste corporations in the world, controlling the water supply in some 34 U.S. cities and in hundreds of international municipalities.

Water itself is the third biggest commodity in the world, a $400 billion global industry that ranks right after oil and electricity. Naturally, Flow shows white men with haughty French accents in chic rumpled suits telling indigent protesters, “You have insulted me so I will not talk to you,” as if hurt manners were all that’s at stake. The scenes move from South Africa where dire poverty prevents villagers from paying for clean water, having to instead risk cholera and death in the polluted channels of their local streams; to Bolivia, where offal has so fouled the main waterway that the river has been covered with cement; to India, where the great “mother” Ganges is siphoned down for sale to Delhi residents; to the United States, where citizens of a Michigan town tragically lost their suit against Nestle, which is still pumping out the surrounding aquifer to bottle free water to the estimated tune of $1.8 billion in profits per day.

Indeed, bottled water becomes the most immediate focus for those itching to act after watching this disturbing doc. Repeated studies have shown that, because the EPA does not regulate water contaminants, it is often less sanitary than municipal tap water, can contain high levels of arsenic and has sometimes been pumped from such unsavory “natural” wells as found at superfund sites.

But the overarching philosophical argument here concerns the notion of ownership and rights. Can one own the sun? The fresh morning breeze? The night sky? Water ranks among the most prized of the “commons,” resources vital to all to be shared by all, yet as Flow so deftly points out, its very preciousness is what puts it so at risk.