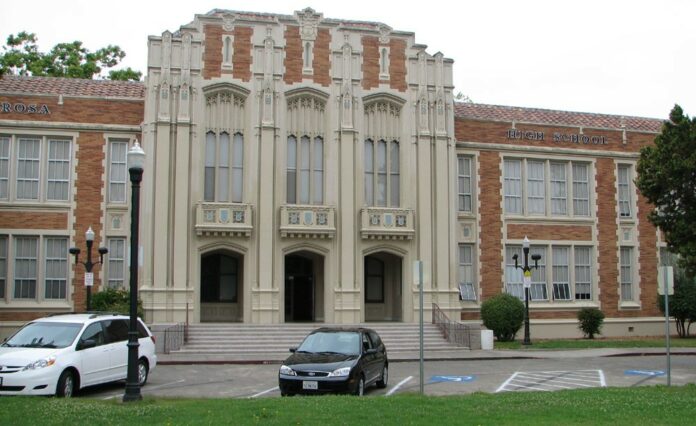 It was a very scary last day of school on May 31 as three facilities in the Santa Rosa City Schools district were locked down after reports of a student with a gun.

Santa Rosa City Schools spokesperson Beth Berk says the lockdown protocols were initiated after the administration at Santa Rosa High School learned of a “possible sighting of a gun” on campus Friday morning.

The school contacted the Santa Rosa Police Department and locked down the high school, nearby Ridgway High and the district office .

By noon, some two dozen police officers were at Santa Rosa High School conducting room-by-room searches. “All students are safe at this time,” Berk says via email.

“A systematic search is being conducted due to a report of a student seen on campus with a handgun,” SRPD reported on Facebook. “There were no threats of violence and no one has been injured.” The suspect was apprehended by early afternoon.

During the lockdown, parents were directed away from the high school to the parking lot of Santa Rosa Junior College’s Emeritus Hall for information.

Social media posts from parents of students in lockdown at SRHS give a terrible sense of their anxiety and concern, with some hoping it was just a last-day-of school prank, and others fearing for the safety of their loved ones. “Just heard from my child a gun is on site,” one parent posted to the Santa Rosa Police Department’s Facebook page. “She says she is safe in the locker room area.” Another: “My daughter texted me from the gym where they’re being locked down.”

The Washington Post published an exhaustive investigation on the advent of school lockdowns last year that analyzed the emotional strain on students who have to endure a lockdown.

According to the Post’s groundbreaking report from December 2018, at least 16 schools go into lockdown every day in the United States; of those, the paper reported, nine are prompted “by gun violence or the threat of it.” The paper tallied some 6,200 lockdowns in 2017-2018 across the country, potentially impacting on the mental health of more than 4 million students.

“The sudden order to hunker down can overwhelm students, who have wept and soiled themselves, written farewell messages to family members and wills explaining what should be done with their bicycles and PlayStations,” the Post reported.

Sonoma County’s seen a handful of school lockdowns in recent years, including one earlier this school year at Piner High School that was prompted by a nearby armed robbery. And numerous schools in the region have initiated “active shooter” drills, especially in the aftermath of the 2018 Parkland, Florida school shootings.

The alleged suspect was apprehended in the early afternoon, hours after the lockdown was initiated. At 1pm, the SRPD Tweeted that the students would soon be released from the high school—and free to get on with their summer vacations.

As the distressing episode winds down, the district is meanwhile already talking about dealing with any potential trauma to students as a result of the lockdown. “The school administration and counselors will be discussing this very thing this afternoon,” Berk says via email. “Any info on Santa Rosa High School counseling [is] to be determined and will be communicated to students. As you know, this is the last day of school for the school year,” she adds. “Our integrated wellness center is open during the summer.”