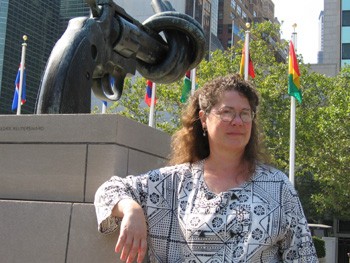 U.N.-stoppable: Sonoma resident Candi Smucker has been nominated for a Nobel as part of 1000 Peace Women.

“That’s better odds than the lottery,” she says with a huge grin.

Smucker’s name is on a list of 1,000 women submitted to the Nobel committee last January. They represent millions working quietly worldwide in support of peace and justice.

The goal is to sell the judges on the idea that real peacemakers aren’t celebrities but ordinary people dedicated to improving the world in a variety of ways. Musician Holly Near of Sebastopol is on the list, as are 12 other residents of the greater San Francisco Bay Area, out of 40 U.S. nominees.

“It’s a concept award to me. I believe in the concept,” Near said in June, when the 1,000 names were announced. “It actually pleases me more to be on the list that it would to be nominated alone. This, to me, is more exciting.”

The 1000 Peace Women application is one of 199 submitted, making this year’s Nobel Peace Prize nominating pool the largest ever–and giving Smucker her .5 percent chance of winning.

Founded in Switzerland, the 1000 Women for the Nobel Peace Prize 2005 project challenges perceptions of how peace is achieved by emphasizing the ongoing efforts of females everywhere rather than grand gestures by powerful politicians or leaders, who are usually male. Since its creation in 1901, only 12 women have won the Nobel Peace Prize; the first female recipient was in 1905, exactly 100 years ago.

The list focuses on women who work in a wide range of activities from preventing violence to meeting such basic needs as food and shelter; from combating poverty to create social and economic justice; from preventing physical harm and discrimination to dealing with tragedies created by wars and other armed conflicts. The nominees include two U.S. congresswomen, as well as several activist musicians such as Near.

While Near is well-known (in addition to her successful albums and movie roles, she was named Ms. magazine’s Woman of the Year in 1985), most of the Peace Women nominees are like Smucker: dedicated and determined, but not recognized names.

Smucker’s passion is fair trade, helping artisans in economically developing regions create their wares and get them to market. Smucker and her partners own fair trade stores in Healdsburg and Sonoma.

A former vice president of operations for a chain of franchise bookstores, Smucker became involved in a fair trade gift store run by a Mennonite church and realized she could use her retail expertise to make a positive difference in the world.

“Retail outlets are the bottleneck in the fair trade system,” Smucker says. “There is the opportunity for it to be a much larger movement. There is no end of artisans who desperately need a market. The difficulty is having enough places to sell their goods.”

She married Brian Smucker. The couple settled in Sonoma in 1997, opening their first for-profit fair trade shop, called Baksheesh. Teaming up with a partner, they opened a second Baksheesh in Healdsburg two years ago.

The Baksheesh partners earn a living wage for their efforts. The goal is not to make lots of money; it’s to sell enough product to support artisans around the world.

Smucker also wants to sell people on the concept of fair trade. One hundred or 200 years ago, everyone knew who made their shoes, she says. They knew whether the cobbler would be able to feed his children.

Dollars are a powerful tool, Smucker says, and she wants everyone to pay attention to how they’re used and under what conditions consumer goods are created.

At a Sept. 8 gathering honoring Peace Women nominees at the United Nations in New York, Smucker explained her dedication to creating more fair trade stores. “I have seen the difference it makes to children and communities when women are empowered by having an income of their own.”

Under the Nobel Peace Prize rules, a maximum of three individuals or one organization can win each year. The Peace Women project has named three women to receive the prize. They will represent all 1,000 women, who in turn stand for millions more.

This year’s Nobel judges have a challenge facing them. Will they stick with the traditional approach, choosing one person or organization perceived to have made the most visible impact? Or will they buy the idea that peace and justice are nourished through sustained, sometimes nearly invisible personal actions of courage and determination?

The answer will be announced Oct. 14, at 11am Oslo time (that’s 2am in California). Smucker will be staying up late that night, just to see if that .5 percent possibility pays off.