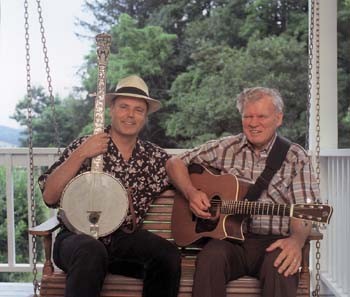 Doc Watson on the road again

‘I don’t like the road, but I love the music and I love a good audience,” says flatpicking guitar genius Arthel “Doc” Watson, 82, one of America’s premier acoustic guitarists. “The bottom line is a man’s got to have a vocation of some kind. But performing in concert has its own rewards, though I have to admit that up until a few years ago I was very nervous being up there. I finally learned to be who I am and relax. When you do that, it’s just like being down there with the audience.”

That newfound comfort helps to explain Watson’s decision not to retire from the road, as he indicated in a 1996 interview with the Bohemian. Back then, this mountain maestro–who brings his Home in the Hills tour to the Luther Burbank Center on Oct. 5–planned to put the road behind him and retire to his patch of Deep Gap, N.C., on land homesteaded by his great-great grandfather. Nobody would have blamed him for settling down.

During the past 40 years, the soft-spoken Watson–struck blind in infancy–has recorded more than 40 albums and played with everyone from Bill Monroe to Vince Gill to Michelle Shocked.

Still, there’s no question that Watson’s pace has slowed in recent years. Despite several reissues and compilations, this six-time Grammy award winner hasn’t recorded a new solo album since 1995’s Docabilly, a tribute to the country, blues and rockabilly that first allowed him to support his family as a professional musician before being “discovered” in 1960 in the heat of the folk revival.

His first instrument was a harmonica that his father bought him at age six. “He said, ‘Son, this thing has notes, just like you hear me sing out of the songbook.'” Watson recalls. “He showed me how to play it.”

Watson’s rise to the top of the country pickers pantheon began in earnest in 1964 when he played the Newport Folk Festival accompanied by his father-in-law, fiddler Gaither Carlton, his brother Arnold and other family members. Homespun, unpretentious and blessed with virtuoso bluegrass licks, Watson’s old-timey music was an immediate hit.

Before his discovery, Watson had been playing in a small local dance band. “I just enjoyed pickin’ with the boys and doing a few of the old pop standards and some of the Nashville stuff,” he recalls. “When the folk revival came, I happened to know a bunch about the old-time music, and what I didn’t know I learned right quick because I loved it.”

Following the Newport Folk Fest appearance, Watson’s son, Merle, then 15, joined his father as an accompanist, with the two becoming known for bluesy guitar and banjo exchanges. It marked the beginning of a close personal and professional relationship that ended in 1985 when Merle was crushed beneath an overturned tractor at his farm.

“Without him, I might have achieved only a third of what I’ve done, because Merle was with me during the hard years,” Watson once said. “And, God, the hundreds of thousands of miles we drove together.”

The accident proved devastating. Watson cancelled all of his concert dates and set his sights on retirement. Then, between the accident and the funeral, Watson says Merle appeared to him in a dream and told him to persevere. Watson called the tour promoter and reinstated the last concert on the tour. He’s been going ever since.

These days, Watson shows no sign of quitting. “I love music,” he says. “I was born with God-given talent, and I’ve loved music as something that’s magic. I loved it with a passion without ever knowing that it would become a vocation.

“I’m just a country boy who likes to play music for people who enjoy it.”

The Year in Music