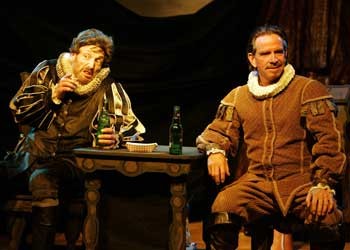 Drake’s Drum, the latest foray into historical surrealism by Sebastopol playwrights Conrad Bishop and Elizabeth Fuller, is the kind of show my teenage daughter calls “a brain play.” Crammed with ideas, ornamented with thick-bodied dialogue as rich as a chocolate-dipped cheese cake, Drake’s Drum will certainly be deemed “difficult” by some and thoroughly thrilling by others.

Like the best of Stoppard, Tennessee Williams, Clifford Odets and even Shakespeare, Drake’s Drum is a play that makes certain demands on its audience. Those who want their theater served up in nice, easy-to-digest pieces will surely find it not to their tastes, despite the supremely fine acting by a quartet of first-rate actors. Those who, like myself, actually enjoy having their minds exhaustively rearranged upon leaving the theater, will most likely want to head right back for a second helping.

“I am a footnote in history,” states the spectral Elizabethan gentleman Sir Thomas Doughty (Scott Phillips) in the opening moments of the show, as an eerie Queen Elizabeth (Lois Cole) hovers above the stage in the background, an ominous Francis Drake (Eliot Fintushel, electrifying as usual) hovers nearby, and a bright red Hyundai, with working headlights, rests at a slightly tilted angle at one side of the stage. From the get-go, it is obvious that this is a profoundly weird show.

Based on a mostly forgotten bit of nautical history, Drake’s Drum examines an actual conversation that, according to ships records, took place between Francis Drake (just prior to his becoming a “Sir”) and his friend and second in command Thomas Doughty. While attempting to circumnavigate the globe, Drake put Doughty on trial for sedition, mutiny and practicing black magic. After achieving a guilty verdict and sentencing Doughty to death by beheading, the captain invited his former best friend to his quarters for a “sumptuous feast” of corn chips, french fries, McDonald’s hamburgers, Gummi worms, pizza and beer—at least that’s what they eat in this giddily surreal imagining of what took place between Drake and Doughty during Doughty’s last meal.

The story crashes back and forth between the 1500s and today, as Marcie (an engaging Pamela Astarte), the owner of a solar-panel-supply company, drives through the night from Northern California to Los Angeles, making cell phone calls to those she feels cut off from while listening to a book on tape about Sir Francis Drake. Across the oceans of time, these two stories and the props used to tell them frequently merge and mix themselves up. Over all of this, the floating Queen also makes sporadic remarks, calling Drake “My little sailor” and occasionally demanding that he bring her corn chips.

The meat of the matter, however, is the conversation between the condemned man and the friend who condemned him. With all the talk of patriotism, the blind allegiance to leaders, a warlike voyage that does not turn out to be the one its soldiers were told it would be, a captain who claims to read no books but the Bible and who proudly defends his responsibility to his “investors,” and the repetitions of Drake’s motto “God, Country and Profit,” the political parallels to our present situation are fairly obvious.

To pull of this kind of absurdist political tomfoolery takes a strong cast, and the actors of Drake’s Drum are extraordinary across the board. Phillips continues to demonstrate his flexibility, playing Doughty with the right mix of outrage, civility and humor, and Cole, as Elizabeth, manages to be both whimsical and slightly frightening, which also works to describe Drake’s Drum itself, a play that could easily linger in your mind for days after.