No Decision on Gelhaus Was Scheduled Today, Despite Rumor 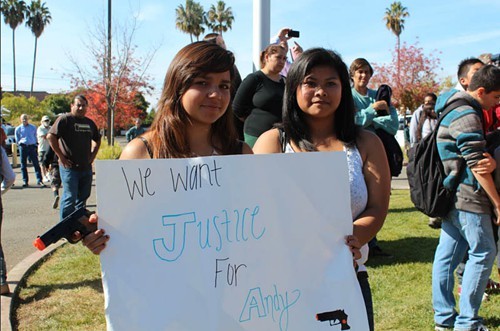 A rumor that a decision on the fate of Sheriff’s deputy Erick Gelhaus is imminent is false, says Terry Menshek, media coordinator of the Sonoma County District Attorney’s office.

Widespread emails and internet chatter said a press conference was scheduled for today at noon that would say whether charges would be filed against the deputy, who shot and killed 13-year-old Andy Lopez on October 22 last year when the boy’s toy AK-47 rifle was mistaken for a real gun. “I’ve gotten a dozen calls, there was a rumor going around. It even got as far as Los Angeles,” says Menshek. “There was never one scheduled,” adding that this is the second time such a rumor has been started.

A timetable has not been set for an announcement on the case. “It’s still under investigation,” she says.

Santa Rosa City Manager Kathy Millison sent an email Thursday to Santa Rosa City Council members and staff members about community outreach regarding the DA’s announcement. The email details actions the city has taken in preparation of demonstrations surround the announcement and gives talking points to highlight when addressing the incident.

In the email, Millison says, “We don’t know when that may occur and we’ll learn of it at the same time as everyone in the community learns of it.” But in a handout sent as an attachment to that email, one of the assigned roles of the internal action plan is for the city manager to “email talking points to council as soon as decision is released.”

Jonathon Melrod, an attorney working with the Justice For Andy Lopez group, says a press conference was scheduled for noon today by the DA’s office, but cancelled at the last minute. He says he doesn’t know what the subject of the press conference was supposed to be, but that it likely had to do with a decision on Gelhaus. “The whole thing is bizarre to me,” he says.

Protocol in officer-involved shootings is to make an announcement regarding charges 90 days after the incident, which in this case happened on October 22. Critics say District Attorney Jill Ravitch was waiting until after the June 3 election, which she won by a wide margin. “She can’t keep waiting,” says Melrod.

Gelhaus returned to work, albeit at a desk job, in December. The Santa Rosa Police Department, which is investigating the incident, issued its report to the DA’s office in January.

The talking points Millison gave include empathy, safety and information about the SRPD’s role in the investigation. “We encourage demonstrators to express their emotions while staying safe,” says the handout.

Santa Rosa City Councilman Gary Wysocky says he doesn’t know when an announcement will be made. “I won’t get advance notice,” he says via email. “I do not know who requested the talking points for the council.”