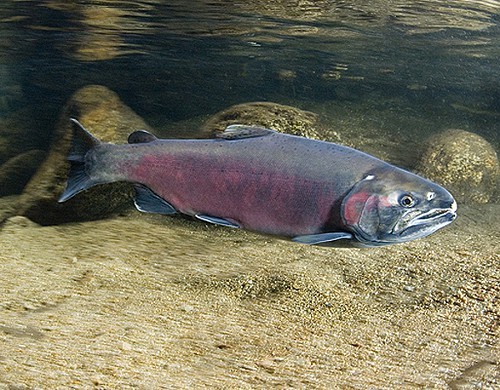 The coho salmon run in Marin County is bafflingly high this year. In a drought-stricken season with water being diverted from fish habitats to agriculture, this year’s estimate of nearly 20,000 juvenile salmon made up the largest migration from Lagunitas Creek since the annual exodus started being recorded in 2006, according to estimates by the Marin Municipal Water District.

“We are a little bit skeptical,” says George Neillands, biologist with the Department of Fish and wildlife, “because it’s an estimate.” He said the low water flow could throw off the count because fewer fish can avoid the trap, since there’s less room to swim around them. “We take it with a grain of salt until we can really evaluate and review it,” he says.

Coho are born in freshwater rivers, living for over a year before swimming to sea. This year’s late rains trapped the young salmon in small tributaries until after the larger fish, who had returned to spawn, finished their business and returned to the sea. Normally the creek can’t hold more than about 11,000 fish, and the smaller ones are chased away and washed out to sea.

Despite that, the number of redds (egg clusters) was down from the 20-year average. Only 206 were counted in the Lagunitas watershed, far less than the 250 average. That has to do with the drought, says Neillands, but also to do with fish survival from years prior.

If the count is accurate, it means there might be a stronger returning class in future years. But the average fish size is down, says Neillands. “That equates in the ocean to probably not as good survival,” he says. “In the ocean, size matters a lot for fish survival.”

But even still, the endangered coho aren’t out of the woods yet. This year’s forecast El Niño storms could wreak havoc on the fish, but the strength of the weather phenomenon is tough to predict. With warmer water comes tropical species from the south and less food for the salmon. “It’s a different strata of fish species out there, and it doesn’t support as much food for them,” says Neillands.