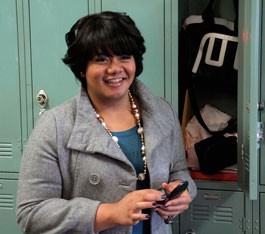 This week, the Sebastopol Community Center hosts a special screening of Straightlaced, a film focusing on the issues and challenges of teen gender identity. A panel of local teens and professional adults will remain on hand after the film for an open discussion and workshop. Join the conversation on Sunday, Oct. 9, at 390 Morris Street, Sebastopol. 2–5pm. $15-$20; $5 for teens. 707.823.1511.

Also this week, Katelynn Cusanelli from The Real World: Brooklyn appears to discuss issues and questions on gender identity. Cusanelli had been living as a woman for five years prior to the show and completed her transformation just before the show began filming. Katelynn is transgendered, bisexual and at ease answering questions about her identity; share in the lively discussion on Tuesday, Oct. 11, at the Cooperage at Sonoma State University. 1801 E. Cotati Ave., Rohnert Park. 7pm. Free. 707.664.2753.

Dr. Carloz Munoz Jr., a Professor Emeritus in the Department of Ethnic Studies at UC Berkeley, was raised in the barrios of East Los Angeles as a son of working-class Mexican immigrants. This week, the founding chair of the nation’s first Chicano Studies Department speaks at Sonoma State on issues of racial equality in America. Dr. Munoz has written several books on civil and human rights and is the first Mexican-American nominated for the Nobel Prize in Literature. Dr. Munoz shares his firsthand experiences on Wednesday, Oct. 12, at the Cooperage at Sonoma State University. 1801 E. Cotati Blvd., Rohnert Park. 7pm. Free. 707.664.2753.