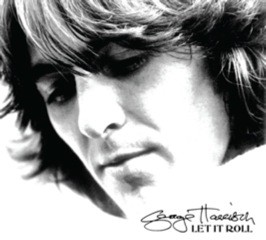 You know, it really is a shame that the Beatles in power – namely the Lennon/McCartney juggernaut – never let the late George Harrison put more than a couple songs on each album. One listen to Revolver or Abbey Road, and it’s clear that the “quiet one” could compete. But his prolific solitude and pent-up material are what made his solo career such a triumph, as evinced by the new career-spanning collection Let it Roll: Songs By George Harrison.

Right off the bat with the landmark triple album All Things Must Pass, Harrison boasted solid, developed output with a maturity to counter Lennon’s and McCartney’s uneven 70s solo work. “All Things Must Pass”, “My Sweet Lord” and “What Is Life” still hold up as thinking man’s pop classics, all especially crisp with the new remaster treatment. But each tune has an underlying joyousness, even 1981 Lennon tribute “All Those Years Ago“.

Tellingly, the Beatles references are plentiful, from the live renditions of Beatles tunes (the best being a spot-on acoustic “Here Comes the Sun”) to fond reminiscences (the still-charming “When We Were Fab”). Harrison was so content that he actually did NOT run from his storied past. A latter-day highlight is the ethereal instrumental “Marwa Blues” from the posthumous Brainwashed album, which, along with the optimistic “Any Road“, suggests a serenity in his twilight years. But while this is a solo showcase, Harrison’s Traveling Wilburys hit “Handle With Care” would’ve been welcome, especially with its recent “modern classic” status.Let It Roll’s most important revelation is Harrison’s distinctive, conservative guitar playing. Always under-appreciated – much like his deceptively rich voice – his fretwork shines throughout, especially in lesser-known tracks like 1989 slide-guitar workout “Cheer Down”. Highly recommended.–David Sason

The Evolution of the Blues