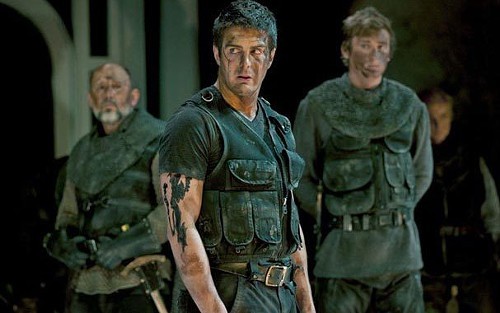 'As You Like It,' 'Medea Macbeth Cinderella,' 'The Very Merry Wives of Windsor, Iowa' and 'Henry V' at the Oregon Shakespeare Festival

The Oregon Shakespeare Festival in Ashland—a scenic six-hour drive from Sonoma County—has become a popular summertime destination for theater-loving travelers from the North Bay and beyond. The prime time for Ashland journeying is between June and September, though the eleven-play season actually opens in late February, starting with shows in its two indoor theaters before opening the massive outdoor Elizabethan stage in June. Founded 77 years ago, the multifaceted festival features one of the oldest and largest repertory companies in the United States, with a reputation for quality theatrical undertakings unequaled on the West Coast.

It doesn’t hurt that the town of Ashland is so cute and pretty you want it take it home in your pocket once your visit is through. With banners bearing Shakespeare’s likeness flying all over town, and a service-industry as obsessed with theater as the 400,000 annual visitors (want to know which shows are good? Ask a barista at the local coffee place), Ashland is a unique and eccentric oasis of culture-loving obsession and offbeat charm.

In Ashland, the plays, above all, are the thing.

In June, with the opening of the beautiful outdoor Elizabethan Theater, three new shows opened, and will run through October. One is a stunningly gripping production of one of the Bard’s most entertaining histories, one is an elegantly lyrical take a less-frequently-performed comedy, is fitting enough, given that OSF is one of America’s longest annual Shakespeare festivals—running each year from February to October—that director Jessica Thebus has placed Shakespeare’s much-loved pastoral romance, As You Like It, within the context of the passing of seasons. Winter, Autumn, Spring and Summer are personified in the play’s lovely opening, played by four female “graces,” who begin the show by singing life into the massive multi-geared clock which hovers over the entire stage, ticking and whirring, its enormous hands spinning the sun and moon around its face, setting the movement of clouds and sky, snow and falling leaves.

That clock is almost worth the price of admission.

The play—in which a loosely knit band of city-dwellers escape their tyrannical ruler, escaping to the magical Forest of Arden—tells several stories at once, most of them love stories: romantic love, brotherly love, love of life and love of nature.

Though packed with improbably situations and unlikely coincidences, As You Like It is one of Shakespeare’s most lyrical plays, containing one of his most famous speeches: All the World’s a Stage, and all the men and women merely players; They have their exits and their entrances, And one man in his time plays many parts.” That speech is spoken by the melancholy nobleman Jacques, here transformed into a noblewoman. In many ways, that speech, with it’s description of the seven stages of life that the very old experience across their years, is at the heart of this production, in which Jacques’ melancholy does a little dance with the more joyful, inexperienced passions of the younger characters.

The large cast is superb, and they do a wonderful job of making their characters distinct, with individual arcs that are extremely clear and quite satisfying, which goes to describe the entire production, a sweet and gently bitter love-song to the never-ending cycles of life and death, love and loss.

Henry the Fifth, Shakespeare’s most inventive and tightly-written history, is far more spare in its presentation, the action staged on a monochromatic set of white and gray carpet, that black-and-white theme carrying over to the costumes of the characters.

Henry the Fifth, more or less a sequel to Henry IV parts one and two, is a play about war. Young King Hal, who Shakespeare showed as a young hedonist in the earlier plays, is now struggling against his youthful reputation as his powers of rule are tested. Encouraged by his advisors and family. Hal decides to invade and capture neighboring France, partially in retaliation for France’s stinging public insults against the untested ruler. Many productions of Hank Five attempt to juice up the action by including pantomimed battle scenes where Shakespeare only refers to them. Shakespeare, through the voice of a narrator, actually makes a point that the armies and horse, the battles and sieges and blood and death, must take place within the audience’s imagination.

Director Joseph Haj has taken Shakespeare literally, and yet there is no lack of tension of excitement. In fact, by retaining Shakespeare’s focus on the personal and emotional costs of war, with Henry forced to make unspeakably hard choices over and over, the play rises above mere pageantry and action. This is a visceral, riveting, deeply involving drama, with a handful of standout scenes that are breathtaking in their complexity and emotional beauty.

Hal’s decisive and clear-sighted action when a former friend is caught robbing the bodies of dead soldiers is both brutal and deeply moving. Henry V is easily one of this year’s best productions.

Medea Macbeth Cinderella, is something else entirely. A dream project of Artistic Director Bill Rauch—who first staged this odd theatrical mash-up while a wide-eyed college student—MMC is a strange mashup of three classics, each representing a different period in theatrical history: the Greek epic drama, Shakespearean tragedy, and American musical comedy. Rauch, in his earlier experiments with this project, found a certain amount of illumination in the idea of laying three major works of populist entertainment alongside each other to see if there was any juicy symmetry to be uncovered.

Euripedes’ epic Greek tragedy Medea—in which a spurned sorceress punishes the father of her children in the worst way possible—is one of the greatest dramas of all time. The same can be said for Shakespeare’s Macbeth, the tale of two married murderers who take a stab at extreme social climbing, and go spectacularly whacko. Rogers & Hammerstein’s Cinderella may be better known for its television adaptations than for its stage version, but it still features some of the loveliest songs ever written for a musical.

In Rauch’s ostentatious staging, co-directed with Tracy Young, all three stories are acted out, at the same time, all three unfolding and overlapping simultaneously. It’s a fun idea, but one that gets old . . . fast. The side-by-side comparison is academically interesting, occasionally proving that the three plays do have similar rhythms and themes, but most of the time, to this theater-goers eyes, the whole crazy enterprise is merely distracting, distancing, and confusing.

It’s a shame too, because in Young and Rauch’s bold direction there is enough theatrical genius going on to suggest that the three plays might have been brilliant had they been given their own individual stagings. The actors are all first rate, giving some stunning performances. Unfortunately, Medea Macbeth Cinderella is a little like watching the world-series, the Oscars and Dancing with the Stars all at once on three different television sits stacked up like a totem pole. The sensory overload may be stimulating, but in the end its impossible to enjoy the experience fully, because each screen pulls focus from the other, and the occasional rewards are too few and far between to make the effort worth it.

Meanwhile, OSF is taking another bold deviation from the norm in Allison Carey’s ‘The Very Merry Wives of Windsor, Iowa,’ directed by Christopher Liam Moore and adapted from The Merry Wives of Windsor, by Shakespeare. This modern-language translation updates the bard’s farcical comedy from Elizabethan England to modern day Iowa, just after the Iowa caucuses. In the original, the very large Sir John Falstaff attempts to woo two married women, and ends up the great big butt of the targeted wives’ combined attempt to humiliate and expose him. In Carey’s version, it’s Senator Falstaff, whose just lost his recent attempt at reelection, and tries to pay off his campaign debts by wooing and blackmailing two married women, one married to a man, the other—since Iowa allows same-sex marriage—married to a woman.

The gender swap yields some hilarious and frequently very clever and charming moments, with loads of corn-fed silliness including outrageous disguises, a singing cow made of butter, and a pair of mismatched lesbian suitors dressed improbably as sheep.

Focused and furiously funny, The Very Merry Wives of Windsor, Iowa proves that the same adventurous spirit that occasionally produces a failure or two, also often leads to magnificent, if unlikely, successes.

The Oregon Shakespeare Festival continues through October. Visit OSFashland.org for more information on the entire schedule.