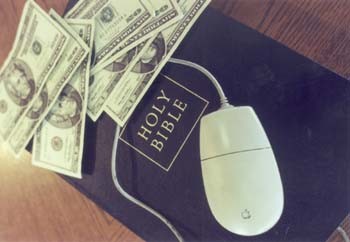 A CENTURY AGO, the pragmatic philosopher and psychologist William James described a “work sickness” characterized by nervous tics, breathlessness, and tension. He attributed this to the fact that work had lost its spiritual meaning.

Today, commentators speak of workplace stress. And while some business people are still looking for a magic cure, others are rediscovering the ancient Christian tradition of work in the spirit of faith and trying to build a New Capitalism inspired by the old idea of the sanctity of labor.

An 11-foot-high white marble sculpture of Jesus washing the feet of Peter marks the entrance to the ServiceMaster Corp. in Downers Grove, Ill. A conglomerate whose stock trades on the New York Stock Exchange, ServiceMaster has over $5 billion in annual sales. Yet the company’s mission statement lists service to God as its first objective.

In the Basque country of Spain, a small cooperative founded in the mid-1950s by a Catholic priest to make paraffin lamps now ranks as Spain’s 11th largest industrial group, with sales of over $11 billion. Its name is Mondragon, and it exemplifies the practicality of the Christian ideals of solidarity and the primacy of labor over capital. Workers vote to elect the company’s Governing Council, which appoints the executive team. For years, the top salary was no more than triple the pay of the lowest-paid worker.

On the small-business front, North Carolina auto dealer Don Flow decided to look at his business in terms of the teachings of Thomas Aquinas. What he found scared him–unrealistic sticker prices, games played with trade-in allowances, and dealers exploiting their information advantage. Flow decided the system was immoral and set out to change it in his own dealership. He devised a special training package that translated the Book of Proverbs into the language of the automobile showroom and put all his sales people on salary to remove any incentive to take advantage of customers.

Flow admits that the most he can hope for is to build an honest business in a notoriously dishonest industry. Interestingly, Flow’s competitors are beginning to imitate him.

The old-fashioned Protestant Ethic saw riches as a blessing that set those predestined for heaven apart from the riffraff on earth. The New Capitalist model sees wealth as something to be shared with the workers who help produce it–arguably a view more consistent with the Gospel.

In fact, these pioneers in the revival of the Christian tradition of work and prayer are fond of pointing out that salvation history began with work. The book of Genesis presents Adam and Eve in a garden, working, well before they fell from grace. For the earliest Christians, work was so important a part of spiritual life that both Scripture and tradition remark on Jesus as a carpenter’s son, Peter and the Zebedees fishermen, and so forth.

St. Anthony, founder of Western monasticism, insisted on labor as an integral part of the spiritual life, and later St. Benedict confirmed the insight, writing, “Only when they live by the work of their hands are they truly monks.”

IN THE EARLY YEARS of the 20th century, German sociologist Max Weber coined the phrase “Protestant Ethic,” which included, as a fundamental, the idea of “calling” to a life work or occupation. But capitalism lost its soul in the Industrial Revolution. Many of the great 19th-century robber barons were good, church-going men who literally killed employees in order to make the piles of money with which they piously endowed seminaries and colleges. Clergy who graduate from these centers of learning attend to “things of the spirit,” a category that does not include business.

Meanwhile, eccentric groups like the Christian Businessman’s Study Committee and the Fellowship of Companies for Christ International are filling the void with conferences, study materials, and support groups. Vancouver’s tiny Regent College offers a seminary program tailored specifically to the needs of lay people in business, emphasizing the dignity of workers, the sense of daily work as a sacred calling and business management as a ministry.

Within the Catholic Church, the past several decades have seen a proliferation of “lay movements.” Chiara Lubich, the founder of Focolare, has been promoting with some success in Latin America an “economy of sharing.”

The movement Opus Dei, whose very raison d’être is the “sanctification of work,” offers an intensely personal, almost monastic program of spiritual formation to its lay members.

In the 18th and 19th centuries, revival frenzies swept America and left enduring marks on politics and society.

Many believe America is in the midst of its third such “Great Awakening,” and while battles over evolution, abortion, and sexual freedom claim the headlines, its most enduring legacy is likely to be a transformation of the way we work.

Gregory J. Millman is the author of The Vandals’ Crown–How Rebel Currency Traders Overthrew the World’s Central Banks (Free Press, 1995), which was translated into nine languages and became a Business Week bestseller. He is now at work on a book about faith and work.