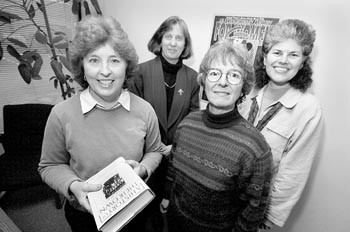 WHEN MOST PEOPLE around the United States first try to reach the National Women’s History Project, they have trouble finding it. First they’ll call New York. Nope. Then they’ll try Washington, D.C. No luck there either. They’ll keep calling big cities around the country until eventually they’ll encounter some switchboard operator in some office who finally sets them straight.

“And even then, when read, ‘Windsor, Ca.’ is frequently misinterpreted as ‘Windsor, Canada,'” says NWHP cofounder Mary Ruthsdotter with a laugh. “I guess we’ve kind of put Windsor, Sonoma County, on the map.”

Ruthsdotter, 55, is recalling her 20 years with the organization. She recently stepped down from her office position as projects director, saying she wants to pursue new ventures.

“The Internet calls to me. Some of these women’s sites are just doing finance and beauty, and I think they should get some women’s history content in there.”

Ruthsdotter says she stayed involved with the project for two decades because she knew that telling the true stories of women’s lives and accomplishments could change the cultural climate.

As recently as the 1970s, women’s history was virtually an unknown topic in the K-12 curriculum, and was far from the public consciousness. Ruthsdotter says the lack of women’s history taught in schools has had far-reaching negative consequences.

“As long as there’s this misconception that women haven’t done anything of importance or interest, there will be the parallel assumption that women aren’t important and aren’t interesting. It’s impossible not to draw that conclusion when you’re a kid. It erodes girls’ self-worth and self-esteem as well as worth attributed by boys and men toward girls and women,” explains Ruthsdotter.

“Girls learn gradually that they are ‘less than’ and boys start learning that they’re ‘more than,’ because all the focus is on what boys and men have done. Well, that doesn’t set any of us up for good relationships with each other or for figuring how the world got to be the way it is and deciding what we can do about it to make it more agreeable to everybody,” she adds.

“I think we’ve done well at showing people how to incorporate women’s history in everything as a simple matter of obvious fact.”

IT’S BEEN QUITE a success story. What began as a grassroots effort from the back bedroom of a Santa Rosa home in 1978 mushroomed into hometown parades and speeches in Courthouse Square and eventually expanded into a national institution, capturing attention around the country and around the world.

The organization, which began as the Education Task Force of the Sonoma County Commission on the Status of Women, and became a separate nonprofit organization 20 years ago, has made impressive strides in raising public awareness of women’s forgotten heritage.

The thriving award-winning educational organization is perhaps best known for spearheading National Women’s History Month, a massive focal celebration each March, proclaimed since 1987 through a Joint Congressional Resolution. During this time, informative programs focusing on women’s contributions and experiences are held at work sites, schools, colleges, public libraries, and various other locations throughout the country.

These days the NWHP serves as a women’s history information clearinghouse, providing factual information, referrals, and program-planning assistance for the entire country. It has developed and produced curriculum units and a teacher-training module.

The NWHP staff of about 12 in the Windsor office act as consultants to county and state offices of education and are often invited to speak around the world. Two websites for the organization each boast about 10,000 hits per week.

The icing on the cake will come next month when the five founders will be honored by the President’s Commission on the Celebration of Women in American History and the Congressional Women’s Caucus in Washington, D.C.

OF COURSE, it wasn’t always this way. Back in 1978, when several Sonoma County women began the fledgling organization, it was all very quaint. Very homegrown. “We started out in Molly MacGregor’s [the NWHP’s executive director and cofounder’s] guest room,” recalls Ruthsdotter. “And our entire inventory fit under the guest bed. We had to move the cat box out of the way when we were filling orders, and we used to move the salt-and-pepper shakers out of the way and draw up plans for the organization on the kitchen table. It was just as homey as you could hope for.”

Then mail began to trickle in. Ruthsdotter remembers jotting down names and addresses on 3-by-5 cards, which she kept in a little green metal recipe box. “It was a real woman’s approach,” she recalls.

In 1980, five local women joined forces: Maria Cuervas, a county employment program worker; Paula Hammett, a tribal sovereignty program worker; Molly MacGregor, who worked with the Sonoma County Commission on the Status of Women; Bette Morgan, who worked on historic preservation; and Ruthsdotter, eager for a new adventure after working at the University of California in Los Angeles.

They formed the NWHP as a nonprofit organization, hoping to increase public awareness of women’s multicultural history. The group won a mention in Ms. magazine.

In 1981, Nell Codding, the late wife of local real estate developer Hugh Codding, donated office space upstairs in Coddingtown to the NWHP, enabling the founders to move the operation out of MacGregor’s guest room. But it was still tough going. One summer when the air conditioning died and the organization had no money to fix it, Nell Codding stepped in and wrote a personal check to repair it and thus save the office computer.

IN THE YEARS that followed, the NWHP began making inroads. In 1981, it initiated the Women’s History Resource Service, in which project staff review all newly published books and educational materials concerning U.S. women’s history and select items to be included in a widely distributed quarterly mail-order catalog.

And in 1984, the NWHP established a member organization, the Women’s History Network, which links interested individuals such as educators, librarians, and community organizers.

By 1989, the organization had grown so much that it moved to its current offices in the Windsor Business Park.

“I think we’ve accomplished helping to break through the invisibility of women’s accomplishments and helped the country take pause to realize women really were written out of history,” says MacGregor, 54.

“One of the reasons for our success is we’ve always talked about the positive parts of women’s history. Of course, there’s been extraordinary discrimination, racism, homophobia, and class issues–that’s just a given in terms of American society–but the real point is, What have women done about it?” says MacGregor.

She adds that when the organization talks about women’s history and accomplishments, it’s casting a very wide net.

“It’s not about something that happened in 1776, although good old Abigail Adams certainly deserves credit for speaking out when she did–but we’re talking about how that energy flows through us today and how we’re able to do the things we’re doing today because those women did it yesterday. And we think about what we’ll be doing tomorrow.”