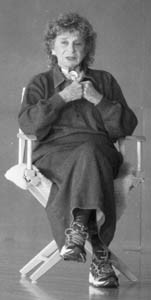 The North Bay is ready for more dance. We’ve certainly got the room for it, which is one of the reasons why there aren’t more North Bay names in the Izzy nominations: we don’t yet have the cultural density to bring critics north of the Golden Gate Bridge. But there are still lots of ways to celebrate National Dance Week, which kicks off at noon on April 20 with an open-air extravaganza at the Yerba Buena Gardens in San Francisco. There you can pick up a complete schedule of open studios, rehearsals, discussions, and performances around the bay–(almost) all free and open to the public. Here are some highlights and local events:

Movement pioneer Anna Halprin (pictured above) leads this annual circle dance and ritual for healing, community, and celebration of life. April 29. Come at sunrise (that’s around 6 a.m.) for a peak experience (literally!) at the top of Mt. Tam, or sleep in and join the Earth Run at Santos Meadow at 11 a.m. (dress in white or black). Potluck follows, so bring some to share. Take Stinson Beach exit off of Highway 101, turn left at Tam Junction and follow Highway 1 north towards Muir Beach. Turn right onto Muir Woods Road north of Pelican Inn. Santos Meadow is 1/2 mile east, on the left. 415/461-5362.