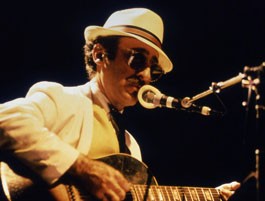 Just who is Leon Redbone?

Blast of the Past: Redbone marries a 1930s musical aesthetic to 1970s hipsterism.

Leon Redbone was born—that much is known. He probably had parents, though it’s not yet been verified, and researchers have discovered that his given name may be Dickran Gobalian, born possibly somewhere in Canada, date unknown. His onstage wardrobe consists of a white jacket and fedora, dark glasses and a thick moustache reminiscent of Groucho Marx. Rumors that he is Frank Zappa’s fraternal twin were long ago put to rest.

What is known about Redbone is his musical ability. Traveling well-worn paths blazed by people like Hank Williams, Jelly Roll Morton, Jimmie Rodgers and Blind Blake, Redbone ranges from melancholy to jolly; he can wipe the smile off your face and just as quickly put it back. With simple arrangements, he croons his way to dreamland in a rich baritone, coming on as either a guitar-strumming cowboy hero or barrelhouse blues player with more than a hint of vaudeville or old Hollywood.

Speaking by phone while on tour in Minnesota, he says that for his upcoming appearance at the Mystic Theatre on April 20, he’s bringing only himself, his acoustic guitar and “an independent accompanist,” Paul Asaro, on piano. Between the two of them, he says, “we make a lot of noise.”

Redbone, who further solidified his 1970s mystique by being mistaken as an alter ego of Andy Kaufman, hasn’t done studio work since the late ’90s. He refers to the last album he released, 2005’s Live—December 26, 1992, as “an accidental recording” of a show at the Olympia Theater in Paris. “I found it one day and put it out,” he says, simply. “Mostly I travel around and play live shows. I don’t live anywhere. I don’t like to fly. I just drive around.”

Redbone is aware of his media image as something of a fictitious character but maintains that his clothing style onstage is “the same as what I wear offstage, maybe embellished—only during shows, I’m holding a guitar.” He prefers to think of himself as a “presenter of tunes” rather than a musician. “I hope for a moment in every song,” he says, “possibly only one or two notes, that means something.

“The rest is a setup for those notes,” he continues. “You get to that moment by a succession of notes and inflections. It’s pure happenstance. I’m still in the same direction I’ve always been in, trying to do a beautiful song that is presented in a way that allows you to hear that moment.”

Redbone’s career began around 1970 in the thriving Toronto folk scene. Appearances at that city’s Mariposa Folk Festival the following two years brought him the excited admiration of people like Bonnie Raitt, John Prine and Bob Dylan. In fact, Dylan, in a failed attempt in the mid-’70s to start his own record label, had selected Redbone as his first choice of artists to sign.

Redbone eventually signed with Warner Brothers and released his first album, On the Track, in 1975. A mixture of songs by Irving Berlin, Johnny Mercer and Fats Waller, it bucked almost every trend in rock music at the time. After a sluggish beginning, television appearances on a new show called NBC’s Saturday Night (later well-known as Saturday Night Live) jump-started his recording career.

Over the years, Redbone’s silver hair has met with the silver screen, as well. He appeared alongside Tom Waits, Dr. John and Joe Strummer in 1988’s Candy Mountain, and provided the voice of the animated snowman in the hit movie Elf in 2003. “If I’m going to be onscreen,” he says, “I might as well be a cartoon,” a depiction favored by Gary Larson, who made Redbone a recurring character in his comic strip, The Far Side.

Asked to name the greatest era of his musical career, Redbone turns deadpan. “The 1760s were very good,” he says. Looking toward the future, Redbone says he’s “working toward world domination. I’m dedicated to doing things the way I want to.”