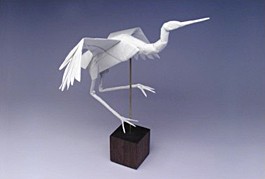 ‘Dancing crane, Opus 460’: Made from just a single piece of paper, this bird is a minor triumph in Robert Lang’s extraordinary repertoire.

When people are first exposed to truly complex origami, they often have very strong, very unpredictable reactions,” says Dr. Robert Lang, a former physicist and engineer, now hailed globally as one of America’s best, most original origami artists. Lang is the kind of a guy whose idea of relaxing at the end of the day involves folding a piece of hand-made paper into a sculpture of a bug, a brontosaurus or a Black Forest cuckoo clock. With several origami books to his name, more than 400 designs catalogued and diagrammed (many on display in museums in Paris, New York, Boston, Tokyo) and over 40 patents related to his former field of lasers and semiconductors, Lang is now a full-time origami practitioner.

And he has become a rock star in the origami world. In 1992, Lang delivered a speech at the annual convention of the Nippon Origami Association in Japan, making him the first Westerner to be so honored. Without question, he is one of those who had a strong, life-changing response to his first encounter with professional-grade origami.

“Certainly, some people don’t have that strong a reaction,” he says. “Some people might look at an origami sculpture and think, ‘That’s lovely, that’s cool, that’s beautiful,’ and that’s where it ends. But other people, they see their first complex origami sculpture, and they are instantly hooked; they become passionate about it, as if they uncovered some part of their brain that was made for origami, as if the concept of origami plugged their brain like a key into a lock.”

Lang hopes to be unlocking some of those unsuspecting brains when he appears April 23 at Sonoma State University to give a lecture titled “From Flapping Birds to Space Telescopes: The Art, Math and Science of Origami.” The afternoon lecture, part of the SSU math department’s weekly math colloquium, will be fully illustrated with photos of Lang’s own extraordinary origami creations, along with examples of origami-inspired technologies and scientific applications of origami concepts.

“Origami,” he explains, “has been undergoing a revolution over the last several years, both on the art side—all the amazing things people are able to do these days with origami—and also on the scientific side. Surprisingly, origami has turned out to have many practical applications in the areas of space, medicine and industrial design.”

As examples, Lang rattles off a string of inventions and procedures inspired by origami. There’s the high-tech heart stint, developed by Dr. Zhong You, which opens and closes using basic origami principles. Automotive airbag designers use origami algorithms to determine where the fold lines should go in flattening and condensing an unexpanded airbag. And then there are what Lang calls “Brobdingnagian space telescopes,” currently staring down at us from space, thanks to the miracle of origami.

“There are several large human-made objects currently floating in space,” Lang says. “Solar sails employ origami principles to collapse them down small enough to fit in the spacecraft that originally deposited them in the cosmos. Origami inspired those solutions to the problem of taking a large thing into space in a small ship.”

In the art of origami, as in the science of physics, it pays to be a bit of a perfectionist. Asked if there are any specific origami designs he has attempted but not been successful at, Lang responds, “Oh, always. All of them. Nothing I’ve ever tried has been fully successful—not enough to satisfy me. But fortunately, I’ve come close enough with some things to put them on my website or display them or sell them or whatever. Insects, for example, are very intriguing, because each time I do one, I think it’s pretty good, then after a while I realize I haven’t succeeded as well as I could have, so I come back and I try it again a different way.”

He cites the legendary “bug wars” of the late 1990s (chronicled by Susan Orlean in The New Yorker), when origami artists around the world began producing better, more detailed, more complex origami representations of insects and bugs in an escalating, international game of one-upmanship. His works are so mind-bogglingly complex and impossibly detailed that it seems amazing that he could feel they were less than perfect.

For Lang, it’s a philosophical issue.

“In some ways, everything I’ve ever folded is only an approximation of an ideal imagining of what it could have been,” he says. “There have been close approximations of that ideal. There have been distant approximations, things where I feel like I didn’t come very close, but nothing has hit the mark perfectly. But that’s good. That’s why I still have something ahead of me to strive for—forever. In the art of origami, artists always strive to get closer and closer to perfection, even though they know they’ll never reach it.”

Recently, Lang has challenged himself by folding a series of sculptures inspired by Indian clay and ceramic pottery, tackling the problems of how to create patterns, lines, spots and other designs in the body of the elegantly flowing sculpture. Asked to explain his artistic goals in regards to this pottery series, Lang keeps the conversation in the realm of philosophy.

“The goal,” he says, “quite simply, is to make something three-dimensional that is more evocative of a ceramic piece of pottery than it is of a sheet of paper, though on one level it never stops being a sheet of paper.” Some “sheets of paper,” of course, become less paperlike than others, and some origami sculptures are so difficult to create that Lang is happy to have only attempted them once. “There’s a rattlesnake I did,” he laughs. “It has about a thousand scales and required a huge amount of folding to create that scale pattern. I probably won’t ever try that again.”

Not surprisingly, Lang is committed not to just creating more and better origami sculptures, but to spreading his origami fever to more and more people, all around the country.

“In my own work, I’m interested in using origami ideas and techniques to push the boundaries of what’s possible,” he says. “But beyond that, I definitely want to reach people, people like myself who are hard-wired for origami, because they may not know their life passion is out there. But if origami turns out to be their life’s passion—as it has for so many people, as it’s been for me—I would like them to have a chance to discover it.”