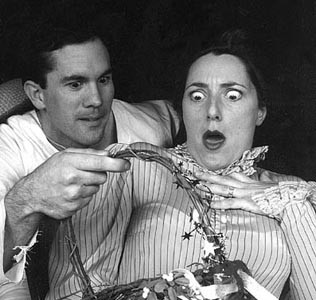 ‘My Three Angels’ is bloody but boring

CHRISTMAS IS the season of giving, but for theatergoers it’s often the season of “take what you can get.” To wit, Pacific Alliance Stage Company offers Bella and Sam Spewack’s retread of French playwright Albert Husson’s La Cuisine des Anges–the hit-and-miss My Three Angels.

Directed by Wendy Wisely, the seasonally themed comedy is set in French Guiana (a small South American country) of 1910, where the hastily transplanted Ducotel family operates a failing general store.

Three convicts on work furlough are dispatched to reroof the family’s crumbling digs while curmudgeonly Uncle Henri is en route from France, set on wresting away control of the business. The uncle is accompanied by his pantywaist nephew Paul (the object of daughter Marie Louise’s affections), who generally makes a nuisance of himself and the plot. Thankfully, the three convicts (qua angels) are on hand to deal out their own brand of justice, poetic and otherwise.

At times, it’s difficult to tell if Angels is a French attempt at the well-made play or was simply pounded into one by the Spewacks. Either way, the material ultimately suffers from director Wisely’s decidedly broad interpretation. A subtler approach would have yielded stronger characterization and consequently more laughs. As it stands, Angels plays as black comedy lite–which is to say, it’s banally gray. It’s gallow’s humor that isn’t well hung.

Veteran local actress Kristen Greer gives a steady performance as agreeable matron Emilie Ducotel, a one-note character out of which Greer manages to squeeze a little melody. Likewise, Rebecca Stow turns in a competent performance as the lovesick Marie Louise, though she too runs up against the part’s limitations.

The trio of convicts, a sort of Frenchified nod to the Marx Brothers, comically perpetrate such antics as cooking their employer’s books, swindling store patrons, and loosing a poisonous snake upon unsuspecting (but arguably deserving) victims.

The convicts move from regret to redemption, finding absolution in the adoring Ducotels, as each ruminates about the nature of their crime while preparing a Yuletide supper.

After a bumbling first act that drags more often than bored high school hot rodders in the Central Valley, the play offers a hopeful second act and a mysteriously healthy finish. It’s as if the players must wade through two acts of laborious setups before bounding to shore with a triumphant payoff.

Chris Ayles turns in a boo-and hiss-worthy performance with the Scrooge-like Uncle Henri. But what makes Ayles’ hard-nosed financier most joyful to watch is the vicarious thrill of seeing him insult the other characters onstage. Lagging a bit in the toady department is Garth Petal’s Paul. A by-the-book sycophant, Paul, with his romantic dawdling with Marie Louise and other machinations, could be slimier.

Predictably, the play leads to the comeuppance of the avaricious uncle and nephew, barely steering free of a throwuppance with an uncharacteristic turn for holiday fare–they’re murdered. ‘Tis the season, eh?