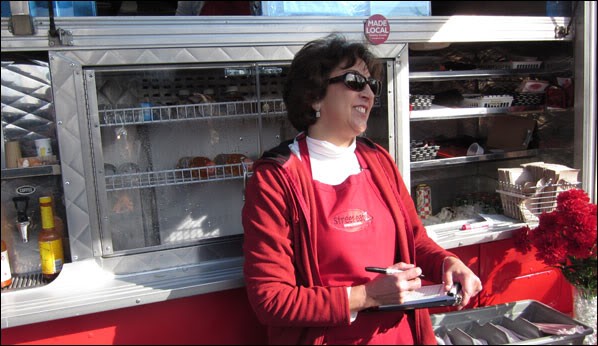 “Yeah, I tried Fork, but they’re out of everything I wanted,” cried my friend at today’s inaugural Munch Mondays event in Santa Rosa. And indeed, other trucks had tell-tale strikethroughs all over their menus, indicating—along with the huge crowds, long lines and hungry fans—that the verdict is in: Munch Mondays is a total success

Established as Santa Rosa’s meager answer to downtown Portland’s famous blocks-long street food carts, Munch Mondays so far is just a handful of trucks. That’s bound to change. The crowd today wasn’t just a bunch of food bloggers and culture vultures—it was made up of businesspeople on a lunch break, downtown residents and merchants out for a quick bite. In other words, exactly the people Munch Mondays had hoped to attract. “I just feel bad that we’re out of so many things,” quipped Jilly Dorman (above), co-owner of the Street-Eatz truck and unofficial spokesperson for food cart owners.I couldn’t stay long, so I just grabbed a quick burrito from La Texanita, which had the shortest lines. (Dim Sum Charlie’s and Fork seemed to be slammed, and the Chicago Hot Dog guy who usually sells in Anarchy Alley next to Ting Hao was doing brisk business too.) But in the short time I was there, I did run into Bob Coburn, of the original Bob’s Fruit Truck. After selling food and wrangling with the law (and with the perception of competition from Petrini’s Market) for 25 years on Highway 12, a case could be made that Bob was the original street food purveyor in Santa Rosa.But that’s not true, actually, and brings to mind an important story.In his old age, while working as a low-paid janitor at the courthouse, Santa Rosa’s native son Julio Carrillo—who essentially founded this city with his philanthropic gifts of land—sold tamales for a time on Fourth Street in Courthouse Square to make ends meet. Historically, that would make Julio Carrillo the original street food purveyor on Santa Rosa. No wonder we love street food so much! It’s in our blood, people.A little more info. on Munch Mondays is here. Be there each Monday, from 11:30am-2:00pm, in what we still charmingly refer to as the “White House Parking Lot,” even though the White House department store hasn’t been there for over 30 years but damn if I don’t remember watching cartoons in a little coin-op booth while my mom shopped there when I was 5. Bring an appetite, ’cause this burrito I just finished at my desk was outstanding.