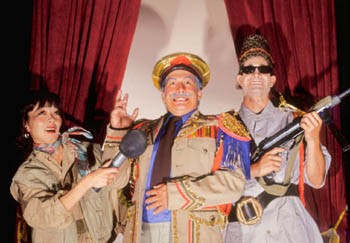 Cracking jokes at the expense of the most tragic event to take place on American soil since the bombing of Pearl Harbor is a bold maneuver. But then again, so is our government’s using the Sept. 11 terrorist attacks as an opportunity to further agendas of globalization and corporate gain. Leave it to the ever trustworthy San Francisco Mime Troupe to bite off such a politically charged mouthful and spit it out as a feisty, lampooning monster. Mr. Smith Goes to Obscuristan, the Mime Troupe’s topical target for this summer’s season, sets its cross hairs once again on the occupants of the White House and the strings they yank.

Josh Kornbluth, monologist (“Red Diaper Baby”), filmmaker (author and star of the temp-worker cult epic Haiku Tunnel), and longtime Mime Troupe admirer, takes his first spin at writing a multicharacter script with Mr. Smith Goes to Obscuristan. Kornbluth’s irreverent voice is evident in the script (“the war on terrorism is brought to you by Chevy Trucks!”), but the lasting impression of Mr. Smith –swift set changes, exaggerated props, sweeping motions–is all Mime Troupe.

The Mr. Smith in question is Jeff Smith (co-director Michael Sullivan), a sincere and aw-shucks-pure fireman whose heroism on Sept. 11 has caught the attention of the Bush administration, who send him off as a diplomat to the tiny, sub-dirt-poor nation of Obscuristan. Obscuristan is, in fact, so poor that they are utterly devoid of natural resources, making them the only desert nation forced to import their own sand.

Smith’s mission is to act as a ray of solid American democracy for Obscuristan’s first-ever election. When an upstart candidate, Ralif Nadir, springs up to challenge the rigged victory of president-for-life Automaht Regurgitov (Victor Toman) and Obscuristani oil reserves suddenly come to light, the president of the United States runs across a dilemma: Using the war on terrorism to advance corporate interests is obstructing his actual foreign policy of . . . advancing corporate interests.

The White House-based scenes wield the sharpest humor, with a clueless George W. Bush (Amos Glick, who also played George W. in last year’s 1600 Transylvania Avenue) sneaking around in a smoking jacket, trying to avoid the bulldoggish Cheney (Ed Holmes). When Cheney discovers an open bag of pretzels on the Oval Office desk, he phones the Secret Service: “We got a code P!”

Bush, Cheney, and a buoyant Condoleezza Rice assume they have a fail-safe pawn and generator of positive PR in Smith–they even pass up sending Jimmy Carter for his chumminess with Cuba. The true-blue Smith, however, actually believes in American democracy and sets out intending to adhere to it.

The highlight of the Obscuristan scenes are the newscasts of a Selected News Network reporter, who is out there expressly to produce feel-good, newsless puff pieces about the election. These scenes drive home the lengths the media goes to broadcast what amounts to absolutely nothing whatsoever. There’s a great four-way scene where she’s on a cell phone with her SNN producer (who, naturally, is skiing in Aspen), while Smith is concurrently on the phone with the American ambassador to Obscuristan.

It’s these moments Mr. Smith needs a few more of. Even with a promising setup and excellent send-ups, Mr. Smith never truly gels. The musical numbers (with lyrics by Bruce Barthol and music by Jason Sherbundy) are forgettable and flat; they hold up the action instead of advancing it and waste what should be the play’s biggest opportunities for a laugh.

The plot is rife with chances for screwball twists, but the momentum never builds to the level that you feel it could–it’s as if a page or two of sight gags and verbal digs are missing. What could be great is merely good. Still, the orchestra’s interludes, especially the Middle Eastern-flavored Obscuristani bits, set the scene and punctuate the dialogue well.

Mr. Smith‘s main strength (besides Holmes’ take-charge cameo as Barbara Bush, who, we discover, is still the real brains behind the White House) is that it deals with depressing topics–corporate ruthlessness and the government’s allowance of it, empty media regurgitation of “news,” and America’s constant need to be the world’s top cop–and makes them, through humor, comfortable for the audience to confront. You’re not going to see political humor this bold on Saturday Night Live or a Mark Russell PBS special.

In classic musical theater fashion, everything wraps up tidily and for the best, which is cheesy yet reassuring. As Americans, we can make a difference! I’d forgotten. Seeing Mr. Smith Goes to Obcuristan was a great reminder. Those who feel vastly disappointed by what they see as shifty dealings of our government will leave this play feeling more patriotic than they have in a long time. Which might make up for the guttural laughs Mr. Smith lacks.