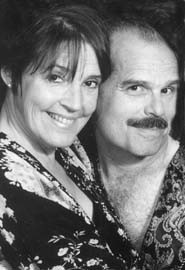 ‘Moon over Buffalo’ is frothy fun

AT FIRST GLANCE, theater about theater seems about as interesting as photocopying a mirror–you’re left with a muddled self-reflection and one less dime. However, in the capable hands of playwright Ken Ludwig, who has made something of a career aping the backstage antics of performing arts groups (Lend Me a Tenor, Crazy for You), the result is riotous comedy. His Moon over Buffalo is the perfect curtain-opener to Actors’ Theatre’s 16th season.

The play follows the antics of husband and wife George and Charlotte Hay (Joe Winkler and Mollie Boice, respectively), an over-the-hill and under-the-gun acting team struggling desperately to make something of their plummeting careers, which have landed them in exile on the repertory theater circuit in the cultural wasteland of Buffalo, N.Y., circa 1953. When word arrives that über-film director Frank Capra might attend a matinee performance of their latest production, the couple goes to absurd lengths to make the most of the opportunity.

The playwright has meticulously injected all of the requisite elements of farce–mistaken identity, old flames, misplaced affections, dubious drinking, people in their underwear, questionable paternity, and enough door-slamming to leave audiences unhinged.

Despite its dependence on over-the-top, one-note acting (the characters are little more than theatrical caricatures), Moon over Buffalo still presents a few challenges to the performers. The mechanical precision required to make this work successful, without appearing rote, is testament to the players’ skill and director Argo Thompson’s finesse at comic timing and choreographing pratfalls and a seemingly ceaseless parade of slapstick gags.

Winkler is in comic overdrive as the has-been ham George, whose bloated ego threatens to capsize his sanity and his theater company. Likewise, Boice’s charismatic, if crumbling, Charlotte is by far this production’s greatest asset. Her treatment of the character’s silky, Golden Age-inflected accent and melodramatic manner is ideally suited to Ludwig’s one-liners. When describing a doe-eyed ingenue character, Charlotte quips, “Wholesome isn’t the word–she could give milk.”

Coco Tanner-Boylan is superb as the couple’s daughter, Rosalind, whose reluctance to undertake a life in theater provides much comic grist. Tanner Boylan is well paired with Dodds Delzell, who plays Paul, the company’s young leading man and Rosalind’s erstwhile lover. Delzell adeptly gilds his straight man with just enough hints of lunacy to redeem an otherwise flat character.

In a masterstroke of gender-blind casting, Lyle Fisher plays Ethel, Charlotte’s mother and the company’s costume maker, a brash, half-deaf crone whose distaste for her son-in-law is rarely concealed. Fisher proves to have an uncanny ability to convincingly transform into the backstage matriarch, and his crisp and elegant performance is a feat itself worthy of the ticket price.

Ron Bartels’ Howard, the gallant if overshooting weatherman who is Rosalind’s fiancé, is a splendid study of mislaid earnestness and romantic fervor. Bartels proves well suited to the play’s demanding physical shtick (for instance, a backstage chase sequence has him cascading over furniture and landing an airborne somersault onto a couch with Olympian agility).

Shereece Haynes turns in a fine comic performance as the pregnant ingenue with a predisposition toward doleful pouting and teary exits, as does Dwayne Stincelli as the Hay’s lawyer, Richard, who has endured a life-long crush on Charlotte.

All told, Moon over Buffalo is lightweight, infectious comedy that’s about as intellectually taxing as emptying a bottle of beer. Though it’s frothy, it never goes flat and it is ultimately intoxicating.