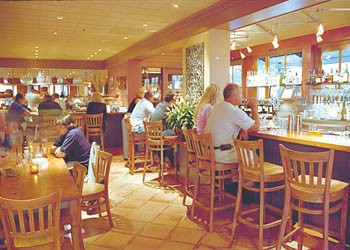 The buzz pays off at Monti’s

The buzz over Monti’s Rotisserie and Bar has been palpable for the last month. First there were the rumors. Would this third restaurant to be opened within the last two years by ambitious restaurateurs Mark and Terri Stark be another Willi’s Wine Bar?

Then, as the hubbub settled (yes, it would be a Willi’s-style eatery) and construction began, everyone began asking when it would open. As the paint dried, gaggles of hungry Willi’s fans could be seen–noses pressed against the glass–taking bets on when the doors would officially open.

“I heard they’ll open next week,” one woman said, milling about outside the plastic-sheeted Montgomery Village eatery in late May, sizing up the menu. “Well, I hear they’re doing a soft launch Memorial Day weekend,” another one-upped to the sound of table saws and hammers inside.

I tried to get an answer from a construction worker who’s obviously fielded one too many nosy inquiries from lady mall walkers. He shrugs his shoulders indifferently. “Soon, I guess.”

“Soon” turned out to be the first week of June, and the new rotisserie and bar has been packed from the outset with curious Willi’s devotees and the merely curious. Just after the opening, I was asked no less than four times in
a single day if I’d eaten there. No? Well, we’ve been there, they tell me. Twice.

In a small town, word travels fast and you don’t want to be the last in your circle to go.

Initial reports of the food were generally glowing, slightly tempered with a few opening bungles. The menu, posted outside the doors days before opening, seemed to be a mélange of the original Willi’s small plates and the seafood focus of the Starks’ newer Healdsburg raw bar. The twist here is a large wood-fired rotisserie in the center of the restaurant grilling everything from roast suckling pig to veal.

Vowing to get a sense of the place without feeling overly influenced by my devotion to Monti’s siblings–Willi’s Wine Bar in Santa Rosa and Willi’s Seafood and Raw Bar–I try lunch first. Monti’s bar is a perfect late-afternoon dining spot, boasting a friendly staff who are eager to make menu recommendations. Despite our bartender’s wobbly wine knowledge (a bit surprising considering Willie’s lineage) the wine menu is definitely worth perusing. It’s a characteristically unpretentious collection of many familiar California growers, along with a smattering of international wines, that range from around $5 to $8 a glass. Broken into two pages, the menu lists both whites and reds, with a section on “food-friendly” wines that match well with the rich, savory flavors of the kitchen.

On a hot June afternoon, the Ferrari-Carano Fumé Blanc ($8) was a refreshing choice as I pondered the lunch menu. Broken into seven sections, the menu offers small plates, pasta and pizza, sandwiches, seafood from the raw bar, sides (each $6) and a mix-and-match “tastes” selection of three appetizers for $9. Chef Matt Gordon, who headed up the Healdsburg Willi’s, asserts a heavy Mediterranean influence over the menu, with seafood, goat cheese, olives, dates, tomatoes and lamb as centerpieces.

Since the restaurant’s focus is on the rotisserie, I chose the rotisserie chicken sandwich with onion jam ($8.50) and zucchini fries with goat-cheese ranch ($6). The fries, which varied in shape and size on three visits, were initially thick, finger-sized pieces dipped in a light batter and served with a pungently sour goat-cheese dipping sauce. I had expected much thinner slices–more French-fry-like–and the thicker dinner cuts we received were soggy in the middle. That, however, was just the first of my surprises.

The chicken sandwich, which arrived salad-style, mixed with plenty of mayonnaise on thick slices of wheat bread, was a heartbreakingly disappointing debut. The taste of the chicken was smothered in the heavy mayo and the onion jam was nearly impossible to discern. Was it mixed into the mayonnaise or forgotten altogether? The chicken was also mostly dark meat, which I find overly heavy and off-flavored in chicken salad.

The plate arrived with a side of spicy marinated string beans that were a welcome bit of tangy sourness against the oily mayo coating my mouth. A better choice was the Monti’s Cristo ($8), a take on the traditional Monte Cristo sandwich with Westphalian ham and Gruyère cheese, or the chopped chicken salad ($10).

Focusing, like its sister restaurants, on smaller plates (though there are eight large-portion entrées), Monti’s allows for plenty of sampling–and redemption, if you order up a dud. But economy can be deceiving. Somehow we end up spending even more than we usually would by ordering two or three small plates to share rather than just one apiece. However, having license to poke your fork into someone else’s lunch is a pretty fair tradeoff for the steep tab.

A second visit to the bar for drinks and appetizers was a great chance for sharing plates. People watching reaches its zenith around 7:30pm, when the restaurant is crowded with after-work thirty-somethings. With a good vantage point of the dining room and the bar, we made our way to the raw bar, our friend chatting with the flirty prep cooks pulling together seafood cocktails. The staff was consistently friendly and professional and apologetic for minor snafus inherent in the opening stages of any restaurant.

The tastes menu (three for $9) was a standout winner. We tried the house-made mozzarella, spiced baby beets and duck liver mousse. The small portions were a perfect predinner snack that complemented each other nicely. Crab and rock shrimp fritters ($9) were underwhelming, however, with a too-mushy center despite an abundance of seafood incorporated into the batter. Also off were the crushed Yukon potatoes and caramelized onions, which were grainy and had an odd olive flavor. And once again, we hunted for the onions in vain.

Space, at a premium in Montgomery Village, makes for odd al fresco dining at Monti’s; the two outdoor sections are separated by pedestrian walkways, creating a challenging obstacle course for the wait staff. But supping on steak under the stars can’t be beat on a warm summer night. From the dinner menu, the silky and supple grilled Angus sirloin with crispy onions ($19) became a nearly X-rated experience. We exchanged bites with eye-rolling ecstasy. And finally, we’d found the onions.

The wood-fired pizza, which I’d been told was equally incredible, was the cold shower of the evening. I had opted for the simple Margharita ($10)–tomatoes and torn basil. The basil, while torn, was so anemic as to be an almost ridiculous afterthought; I counted five small pieces. The crust was extraordinarily thin and lacking in flavor, and was unable to stand up to the oil of the cheese. For $10, I expect a serious bit of pizza rather than the paltry slices that arrived only moderately warm.

The boy couldn’t resist a seafood martini ($9), a dish that frankly sounds appalling, but which features a large martini glass filled with fresh crab, calamari, shrimp and scallops mixed in a cocktail sauce. The spiciness of the sauce tends to overwhelm the delicateness of the fresh seafood, but a squirt of aioli and preserved lemon are nice accents despite the ongoing threat of the whole thing tipping into our laps at any moment.

Dessert redeemed any faults. On good advice from our waiter, we tried the dense, flourless chocolate sabayon cake ($6) with vanilla gelato. Nearly all of the desserts arrive in oversized bowls and are plenty for two. The cake was intensely rich and decadent, balanced by the cream and sweet vanilla of the oozy, melty gelato. Sword-fighting with our spoons, we sparred for the last bites, nearly licking the bowl clean.

The convivial atmosphere of the restaurant, done in a sort of rustic farmhouse style, fosters intertable discussions and friendly chatting. We all ooohed and ahhhhed when our neighbors received their enormous dessert platters, asking, “What’s that? What’s that?”

Hey–being part of the buzz is what Monti’s is all about.