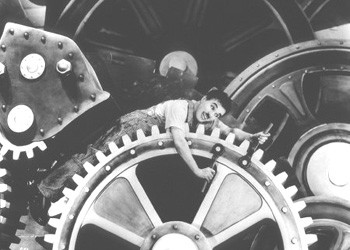 Man Against Machine: Charlie Chaplin’s ‘Modern Times’ portrays a far different time from ours, but manages to speak to us anyway.

Charlie Chaplin and Leonard Maltin go way back. According to the famously amiable movie critic whom most people know from TV (Entertainment Tonight) or from his annual bestselling Leonard Maltin’s Movie and Video Guide, one of the very first films he ever saw on the big screen–possibly the first–was Charlie Chaplin’s 1936 semisilent masterpiece Modern Times. If a rogue bus driver were to hop the curb right now and kills us all on the sidewalk, Modern Times would also be the last movie Leonard Maltin ever saw, since we’ve just left the Rafael Theater where the classic film has been playing as part of the Mill Valley Film Festival. Maltin’s teenage daughter Jesse tags along as we step next door for a cup of coffee.

The movie, which Maltin confesses to having seen at least a couple of dozen times (and which has recently been released in a pristine DVD format, with plenty of extras), follows the labyrinthine adventures of Chaplin’s Little Tramp, who is driven comically insane by the tedious monotony of his joyless job. He’s a bolt turner on a massive assembly line in a futuristic factory (futuristic for 1936), where the actions of every employee are watched on monitors, and where the boss is a little dictator.

It’s a remarkably fun–and funny–film, and the theater was packed. But I had to wonder whether a 2003 audience was going to miss a lot of the historical references. “I wonder how well a movie like Modern Times can be understood in, you know, modern times,” I remark. “With manufacturing going overseas or being computerized, with assembly-line jobs being replaced everywhere by desk jobs, aren’t we losing the movie’s central metaphor–that the working class have all become cogs in the industrial machine?”

“I agree that most kids today have never even seen a cog,” Maltin replies. “If it’s not electronic, it doesn’t exist. . . . That said, I think Modern Times is ageless. I think that funny is funny, and Chaplin always dealt with what I’ll call the human condition because I can’t think of a better phrase, though that one is pretty tired out by now. Chaplin’s comedies built on observations of human nature, and those observations are as valuable and insightful and funny now as they were then, though we might have lost touch with some of the context. It’s a great movie.

“I think the struggle for individuality is ageless, though the particulars may change,” Maltin adds. “There’s an opening scene of people coming up out of a subway exit, and there’s this quick cut making the visual comparison to cattle–or is it pigs?”

We decide it was sheep. Maltin continues, “The point is, you don’t have to have ridden the subway in New York at rush hour to get that gag. But again, being part of a crowd and needing to be an individual is something that all of us deal with in our lives, at one time or another, if not every day of our life.”

“The human condition?” laughs Maltin. “I think he was trying to say, ‘Cling to your own individualism. Fight for your own humanity. Don’t allow yourself to become dehumanized, even though it’s going to be a tough fight.’ Chaplin didn’t make light of that struggle. He shows it as a David and Goliath struggle, to not get caught in the wheels, to not be forced into a job that takes your soul and turns you into a drone–or a cog. It’s hard, Chaplin says, but it’s worth it.

“Ultimately, that’s what the film says,” says Maltin. “It’s worth it to fight the machine.”