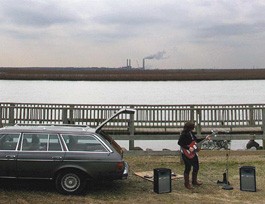 In the North Bay, there’s always some really crazy, wonderfully weird public thing happening right around the corner. This week, that corner is Seventh and B streets in Santa Rosa, right in front of the Sonoma County Museum, where on Thursday, an artist who drove here all the way from Florida will park her biodiesel Mercedes for three hours and jam out on a bunch of crazy instruments through the 400-watt sound system attached to her car.

It’s all part of a mobile art project called Nam June Psyche by sculptor Valerie George, and it’s sure to turn heads of shoppers in the mall parking lot across the street. A tongue-in-cheek nod to pioneering video artist Nam June Paik and in part inspired by Kerouac’s On the Road and the DIY touring tradition, George, a professor at the University of West Florida, has driven across the country playing amplified music at mostly remote locations, juxtaposing her improvised modern composition with natural elements and collaborative exercises with random strangers and recording the results for a vinyl release next year.

The Santa Rosa stop is an exception, where she’ll talk about the project and demonstrate her four-channel PA system hardwired to two car batteries, her eight-channel digital recording system and her drum kit built for the car’s roof rack. We don’t know exactly what to expect, but we know that it’s free and that it’s just going to be so totally darn cool. Don’t miss it when Nam June Psyche hits town Thursday, July 29, in front of the Sonoma County Museum. 425 Seventh St., Santa Rosa. 5&–8pm. Free. 707.543.4533.