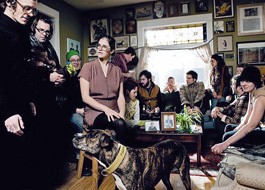 Hailing from Minneapolis with pit stops in New Orleans and New York, Dark Dark Dark is a band whose sound sneaks up on you, (gently) grabs you by the throat and doesn’t let go. While the sometimes four-piece, sometimes six-piece, sometimes more-piece band could be categorized as just another group that would fit in comfortably at a dimly lit speakeasy—you know, that slightly Eastern European, accordion-driven, Tom Waits&–worshipping style so common these days—they really aren’t just one of the pack. This is mainly because of singer Nona Marie Invie’s heartbreakingly beautiful voice, which manages to be tough, sweet and lilting all in one swoop.

Dark Dark Dark swing by the Arlene Francis Theater—formerly the North Bay Film and Art Collective—on Saturday, July 31, headlining an extensive bill that includes the Crux, Waters, Bill Wild, Little Lost Boys and Aerial Stereo. The band will perform songs from their most recent release Bright Bright Bright, a six-song beauty that begins with the subtly devastating, piano-driven title track. Lifting the mood is “Make Time,” taking the listener on a rollicking banjo- and trumpet-fueled romp into some land that is not quite the past and not quite the future. The last track, a cover of “Wild Goose Chase” by Elephant Micah, really puts the spotlight on Invie’s voice, which peels away at the song’s layers, capturing the soft desperation in the song’s themes of movement, loss and yearning.

The band’s core members, Invie and multi-instrumentalist Marshall LaCount, have stated in interviews that they are more into experimenting with different styles than being categorized in one genre, and this willingness to be open with musical influences is obvious on Bright Bright Bright. From sad waltzes to joyful sing-alongs, Dark Dark Dark will brighten the darkest speakeasy with something new and different.