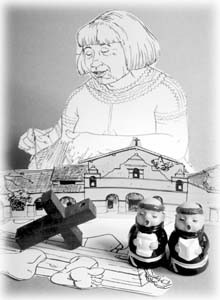 On a Mission: Even in stocks, this enslaved Indian manages a smile.

The author wonders: Is it time to burn down the mission?

IN THE YEAR 1769, beneath the gaze of Father Junipero Serra and under the guns of Spanish soldiers, a great number of stunned, baffled, and recently Christianized Indian laborers began construction on a giant wood and clay structure that was to be their new home. Called Mission San Diego de Alcala–part church, part farm, and part military installation–it was the first of 21 such installations.

Fifty-three years later, the mighty missions stretched all the way to Mission San Francisco de Solano in Sonoma. Catholic missionaries had introduced not only Christianity to the Indians, but smallpox, pneumonia, and venereal disease as well; by 1850 the native populations had been reduced from 30,000 people to a mere 3,000, and the missions–now a potent symbol of cultural contact gone bad–had been abandoned by the padres and lay in ruin.

But that is not the end of the mission story.

Over a century later, the building began again, at a rate never dreamed of by Father Serra. To date, literally millions of the baffling edifices–hundreds of thousands per year–have been obediently built, abandoned, and forgotten as part of a massive state-funded program. Last year alone, an estimated quarter of a million native Californians were forced to build missions, with only the faintest glimmer as to why. The reason?

MOST ADULTS who received their education in the public schools of California can recall their fourth-grade mission model project. A hard-and-fast tradition from Redding to Chula Vista, the annual building of mission models is as much a part of going to school in this state as are earthquake drills and smog alerts.

No one knows how the tradition began, or why it became so fashionable. The state curriculum–which has ordained fourth grade as the year that students learn the history of California–only says, “Teachers should emphasize the daily lives of the people who occupied the ranchos, missions, presidios, haciendas, and pueblos. Reading literature, making trips to a mission, singing songs . . . will bring this period alive.”

A sensible requirement. The mission era, and its dramatic clash of cultures, is among the most exciting and significant periods in the history of our nation. But what do the students learn about that history by building desk-sized replicas of one of these missions?

“Um,” says recent local fourth-grader Kayleigh McGinn, when asked the same question. “Was I supposed to learn something?” Adds her mother, Georgia McGinn, “We learned we shouldn’t have waited till the last minute. Other than that, the project was pretty much a nightmare.”

“The kids do learn something important,” explains one cynical school district employee from Chino after requesting anonymity. “They learn how to make marshmallows stick together.”

Aw, she’s just being nostalgic, remembering a time when the models were made of simple household items: shoeboxes, corrugated cardboard with glued-on noodles, sugar cubes, and graham crackers stuck together with marshmallows.

Though such low-budget versions still land on the teacher’s desk each year, an increasing number of mission models have gone upscale.

MADE OF not-inexpensive foam coreboard, painted with special coatings made to simulate the look of whitewash over adobe, with prefabricated sheets of plastic roofing that resemble the terra-cotta shingles of the missions, these models make the simple, quaint, old graham-cracker mission look like underfed distant cousins.

Not surprisingly, whole industries have sprung up to support the yearly mission-building tradition. Create A Mission–a subsidiary of the cryptically named P.C.F. & C. in Modesto–has come up with an entire line of miniature wagon wheels, mission bells, brooms, saddles, and crucifixes that lend an air of miniature realism to any kid’s project for “only” $1.99 per item.

A number of cardboard, punch-out-and-assemble pattern books are available, with prices ranging from $5.99 to $15. Canyon Foam Design in Ontario has even trademarked the term California Mission Kit as the name of its prefab styrofoam missions, available in the exact shapes of all 21 layouts for only $32.99.

According to Isabel Martinez, manager of Petaluma’s All Model Supply International, the average mission model can run up to $75. “I always know when it’s mission time,” she says. “The store is suddenly full of frantic parents and kids wanting to know how to make bushes and realistic roofing.” Asked what her own son, who recently completed his own model–in lieu of writing a report–had learned about the significance of his mission on the history of California, she said, “Honestly? Not one darn thing. No. That’s not true. He learned he can start something and finish it. But history? Not a thing.”

At this point it would appear that the educational value of this ritual of the mission model –assuming it ever was an effective tool for teaching history to children–has diminished so much over the years that it now exists mainly to support the mission-model industries. Some teachers now refuse to assign them, preferring to engage their students with other, more time-consuming methods.

Jim Silverman of the California History Project encourages teachers to have students make a quick study of the architectural facts of the missions, then choose a single mission to build as a class. Meanwhile, the classroom is transformed into a politically correct mission environment as the children take on the roles of the Indians, the padres, the soldiers, etc., and act out the culture clash with improvisational theater.

“Model building is fine. Anything you use to get their attention is fine,” says author Greg Sarris, a professor of literature at UCLA and the leader of the Coast Miwoks. “As long as you use it as an entrance into your students’ minds. Do you ask the students to imagine the missions being built by the Indians, and to imagine its effect on them? Do you ask them to examine the motives of the padres and all the other players?

“After establishing the mission period as an example of destructive culture contact, do you ask them to imagine how it might have occurred differently, with each culture giving to the other, instead of one choosing simply to dominate?

“That, I think, is what’s important.”

It is clearly time to rethink the mission-model tradition. But it may be too soon to trash the whole idea along with the countless dumpster-bound models produced each year. At any rate, it seems obvious that the powerful history of the mission era cannot be made to seem exciting merely by forcing a child to assemble a model according to some photocopied diagram.

But perhaps by relating the true story–with all of the riveting, complicated, philosophically complex, and undeniably bloody details–the annual building of a little model might indeed become an experience that fourth graders will never forget.