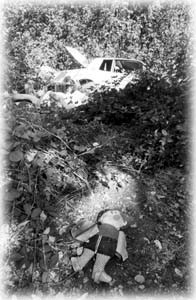 MY FEELING is that if you see someone as being not human, then it is much easier to blame them for their circumstances,” says John Records, director of the Petaluma-based COTS homeless shelter program. “For instance, a year ago we had a call from a Bay Area police officer who said that ‘homeless people are garbage.’ If a person has that viewpoint and can stigmatize someone who is homeless, then it is very hard to help them. After all, what do you do with garbage? You throw it away, you get rid of it.

“I want to help people to understand that the homeless are not garbage.”

Records will get a chance to do just that next month at the Community Call to Action, a forum that will focus on the plight of the many single men and women living on the streets of the county. The Sept. 24 forum, organized by the Sonoma County Task Force on the Homeless, is co-sponsored by more than a dozen organizations.

“The task force feels this is the most neglected group of homeless people,” says task force coordinator Tula Jaffe. “There is a lot of sympathy for homeless families with children–and a lot of programs to serve them–but there is virtually nothing for homeless single men and women for day and night shelters except the armories, and those are closed 70 percent of the year.

“We’re trying to get the community to become more politically active and to encourage the county to find a solution, because this is a national problem of enormous magnitude,” she adds. “Yet everywhere in the United States, people are shining it on.”

The forum comes on the heels of a pair of evictions in the past month of about 40 homeless people living in makeshift encampments along the Petaluma River. It is the result of deep frustration after the Board of Supervisors voted last year not to back the Holiday Inn project in Santa Rosa, which would have turned a vacant Mendocino Avenue motel into a countywide homeless shelter for singles and a multiservice center.

The ambitious project–which enjoyed broad-based community support–would have been funded by state grants and divided between the county and seven of the nine incorporated cities.

The supervisors objected to the Holiday Inn project because it would have concentrated so many homeless–including those with mental illnesses or drug- and alcohol-related problems–in one neighborhood. Instead, the supes endorsed “a scattered approach,” placing homeless shelters and services in several key cities around the county.

“We want to encourage the county to keep its pledge to find an alternative to the Holiday Inn project,” says Jaffe. “We are waiting for them to act on the so-called scattered approach. We haven’t seen any solution.”

The Holiday Inn project would have replaced the part-time National Guard armories, which have provided temporary shelter during inclement weather but are scheduled to close this year to the homeless. A state plan to keep the armories open for the next three years collapsed last week when it fell victim to the budget axe.

Meanwhile, there is a scramble in Santa Rosa and Petaluma–which share much of the cost of homeless services in the county–to create more shelters. County and Santa Rosa officials are negotiating with the Governor’s Office and the California National Guard to lease the Santa Rosa armory for the next two rainy seasons as a 135-bed shelter for homeless single men and women.

Assuming that plan succeeds, says Steve Burke, director of housing and redevelopment in Santa Rosa, local and county officials hope to meet with homeless advocates to develop a permanent shelter, perhaps at the current armory site if the National Guard agrees to relocate elsewhere in the area. “All of that is something we need to work on in more detail,” he adds. “Right now, our focus is finding a place for homeless single men and women when the bad weather comes this fall.”

So far, the high cost and neighborhood resistance are blocking efforts to find a suitable location for the permanent shelter. “Very few people are comfortable with having a homeless shelter in their neighborhood,” Burke concludes.

In Petaluma, COTS has opened a day-services program at the Elwood Opportunity Center at the Sonoma-Marin Fairgrounds. The program provides showers, phones, and washing machines, as well as job, housing, and substance abuse counseling services, and has helped several people find jobs and housing.

Still missing in Petaluma, however, is a permanent homeless shelter for single men and women, though COTS and the Burbank Housing Development Corp. are searching for a place to erect prefab buildings for a year-round facility.

“It’s important for people to understand that there are a certain number of indigenous [shelterless] people in every community, who regard this as their home,” says Records, adding that locally that number includes several second- and third-generation Petalumans.

“The idea that a shelter is a magnet that draws people from outside the community may be somewhat accurate, but in general that’s not the case.

“On the other hand, there are no physical barriers to homelessness–no passport required–and none of our communities lies in isolation.”