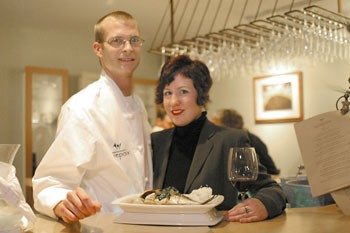 Do Believe the Hype

Is Mirepoix really that good? Yeah!

If you want to skip to the nut of this review right now, at this very instant, go to paragraph five. Oh–you’re still here? Good for you! In order to fully understand why Mirepoix is worthy of attention, it’s important to know that the Datebook section of last Wednesday’s Chronicle had a sizable article about the so-called Nordic rock invasion.

Have you heard about this Scandinavian pop takeover? The Hives, the (International) Noise Conspiracy, the Hellacopters, and a whole bunch of other bands from Europe’s great white north have been putting the ROCK back in rock.

One band in particular, Sahara Hotnights, keeps creeping up in glossy magazines and shoddy newsprint. They sounded promising–four young and attractive Swedish girls who play Ramones-y rock and roll–and when the chance arose to see them play live, I was pretty excited.

The sold-out show in San Francisco was OK, but something was lacking. After all of those hyping blurbs, there was no way the girls could have met my bloated expectations. I got bored with their sincere but formulaic 4:4 shout-alongs after five songs.

Much-praised restaurants fall prey to that pattern too, just like bands. Ever read a luminous review of a place only to eat there and have your high hopes dashed bite after overpriced bite, and to discover that the place is only OK? Is “just OK” now acceptable as “stupendous”? It’s frustrating to pay 20 bucks for an entrée that is underseasoned, overcooked, or unevenly conceived when better, less high-concept food is available elsewhere for a much more agreeable price.

But take heart, for this is not always so. At least two other reviewers have so far bestowed accolades upon Windsor’s Restaurant Mirepoix. According to the other, more timely reviews (which I only read after eating there, so as not to be swayed by the media hype), Mirepoix is smashingly excellent in almost every aspect: food, service, all that.

And yes, after going there ourselves, we found that it is that good, and consistently good, each part of each plate, and all of the things that bring them there.

Mirepoix is housed in the very spot that once held the much-lauded Mariposa. A dear friend told me repeatedly that Mariposa was the best restaurant ever. I never made it over there myself, since I could only afford to eat grits at the time, but I trust him.

This cult of jilted Mariposa lovers, with torrid dinner encounters there still fresh in their memories, means Mirepoix has a lot to live up to. Bryan Dempsey and chefs Matthew Bousquet and Greg Houhoulis are doing a fine job of fulfilling the expectations of excellence implicit in the location while recasting the place in its own unique image.

Mirepoix (a French term for the mixture of onions, carrots, and celery used to add flavor to countless soups, stocks, sauces, and braises) does sound very similar, as a name, to Mariposa. The restaurant itself is tiny and looks more like a well-heeled but unassuming house than a font of gourmet dining. Inside, it’s stylishly subtle and comfortable, with white walls and steel-gray banquettes that echo the cool, smooth slate inlay on the tables.

The amuse-bouche, a purée of white root vegetables with clove oil and small cubes of honeyed turnip, sang with flavor, allowing the too-often lowly winter root vegetables to shine with their true, sweet character. If this soup had a school portrait, I’d carry it around in my wallet and look at it for a quick perk when I was down.

A bowl of mushroom-potato potage with crème fraîche, lardons of bacon, dry aged jack crisp, and garlic chips ($7) was dark, velvety, refined, and balanced, with the mushrooms creating the soup’s backbone rather than bludgeoning the integrity of its other components–almost. What with the crème fraîche and bacon, it was too rich and intense to finish, which was saddening, because it was so wonderful.

The mixed baby greens salad with goat cheese fritters, fresh herb vinaigrette, and balsamic syrup ($7) was equally indulgent but less cloying. The vinaigrette dressing on the greens exploded with flavor, while the fritters–which were almost more like pillowy croquettes–still rang with the delicate tang of goat cheese after deep-frying.

Mirepoix’s entrées leaned heavily toward seafood that night, with three out of five originating from the water. The adventurous sort can spring for the roasted daurade in saffron broth with truffles, glazed rutabaga, pearl onions, wilted spinach, and mashed potatoes ($20).

Daurade, sometimes called dorado, is a bony fish with white, flaky flesh. It has several rows of bumpy little teeth studding its jaws, which you get to see up-close since it’s served whole in a generous pool of what resembled a sauce more than a broth. Saffron permeated the daurade’s fishy flesh, and the flavors of all the other goodies on the plate melded together in a refined-rustic way–except the mashed potatoes, so rich were they with fatty dairy goodness.

Order the roasted pork loin with vanilla-mustard sauce ($18), and order it medium-rare (thank you). Lean but moist and bright-tasting from brining, the pork wielded gentle notes of autumn spice that were echoed in the sour-sweet braised cabbage with figs and fuji apples. Hiding underneath this all was a disk of potato-cheddar gratin that had been assembled with generous amounts of very good and very pungent Redwood Hill Farm goat cheddar (the cheese maker herself, we later found out, was dining alongside us that night). Every potato should hope to meet such a glorious end.

The wine list is, for a place so swanky, on the short side, since Mirepoix is too small to allow for much storage. The regular wine list is well-chosen, with lots of local representation from the Russian River, Dry Creek, and Alexander valleys in particular. That list is augmented with a “Bookmobile list,” the idea being that it’s an ever changing supplement to their wine library. For a refreshing stray from the California norm, try the slightly cedary Boncaillou le Rouge 2000 from the Corbieres region of France ($22 bottle; $6.50 glass), which is served slightly chilled and pairs ideally with the lighter meats on the menu.

With the exception of a tiny incident involving spilled saffron broth, our server was attentive and courteous, and the dishes emerged from the kitchen perfectly paced. We felt taken care of but not fussed-over.

Dempsey, who oversees the front-of-the-house operations, regularly floats from table to table, delivering explanatory spiels about the wine list and the menu, and her liaison efforts do keep the show running smoothly. Some might see this as clingy, but we were never in need of anything or left waiting for a spoon or more water or another glass of wine.

I’d go to Mirepoix again in a heartbeat. Their dishes are lively, but it’s the food itself that’s inspired, not the elaborate wording of the menu. So often menus at other, potentially recommendable fine restaurants promise the sky and fail to deliver.

Mirepoix might not be hyped as much as Sahara Hotnights have been, but I know whom I’d much prefer to spend an evening with–and it’s from Windsor, not Sweden.