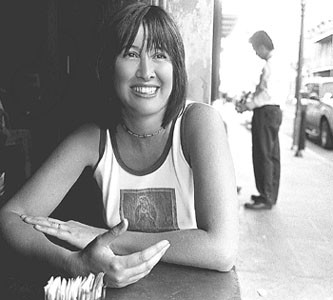 Singer-songwriter still doing it her way

In his newly launched crusade against the oppression of the major labels, Michael Jackson–the self-proclaimed King of Pop and one of the most pampered artists in the recording industry–has spent a lot of time of late crying that he’s getting the shaft from Sony Records, and making allegations that the label’s top exec is racist. But instead of cozying up to the Rev. Al Sharpton, the New York activist who is acting as Jackson advocate, His Eminent Weirdness might want to take a lesson from folk-rocker Michelle Shocked.

These days, Michelle Shocked’s back with her first full album since 1994, and her entire catalog is back in print on her own label. Seven years ago, she sued her label, Mercury Records, to break free of her contract. Shocked had built a style-jumping career that produced such critically acclaimed albums as 1986’s acoustic-oriented The Texas Campfire Tapes, 1988’s feminist ode Short Sharp Shocked, 1989’s protoswing-revival showcase Captain Swing, and 1991’s bluegrass-tinged Arkansas Traveler.

She also had negotiated a rare recording deal that allowed the singer-songwriter to retain control over her master recordings. That may have irked Mercury execs because, despite Shocked’s reputation as an Americana pioneer and college-radio favorite, the label in 1993 refused to pay the production costs of her next project, Kind Hearted Woman. The supposed reason: Mercury said that Shocked planned to record two songs that were “stylistically inconsistent” with the stylistically adventurous artist. The real reason: Shocked said that Mercury wanted control of those master tapes.

So Shocked got mad–and she got even. She recorded a stripped-down guitar version of Kind Hearted Woman, paying for the production herself and selling the CD at her concerts. Eventually the lawsuit was settled. Shocked kept her master tapes. Mercury cut her loose.

In 1994, Private Music released the band–and banned–version of Kind Hearted Woman. And Shocked had the last word when, in 1996, she released the self-produced Artists Make Lousy Slaves, a collaboration with Fiachna O’Braonain of the Hothouse Flowers.

Then she got kinda quiet.

Shocked continued to tour with an ace band, but her recorded output since her legal battles with the corporate machine has consisted solely of Good News, a limited edition CD sold at concerts.

That all changed last month with the release of Deep Natural, a two-CD set that incorporates pop, gospel, blues, reggae, jazz, soul, and folk. The album is on her own L.A.-based Mighty Sound label, which also has reissued her entire back catalog. One of the two new discs, with a guest list that includes O’Braonain and singer Victoria Williams, features more-or-less instrumental versions of the songs (thus the dub reference in the title).

The set kicks off with the upbeat, gospel-inflected “Joy,” a 20-second a cappella blast that sets the tone of the album and generally reflects the conciliatory side of life. And Shocked doesn’t shy away from lyrics inspired by her own born-again Christian background.

Musically, the album is one of the most far-reaching–and enjoyable–of the summer. Graced by everything from New Orleans R&B to a string section to Jamaican-style dub, it offers an eclectic batch of originals and a cover of Jimi Hendrix’s “House Burning Down.” Just for good measure, there’s a raunchy blues boogie performed with just a solo electric guitar and a tin whistle. According to Shocked’s website, one song on the album was written in a chicken coop in Cotati.

It might come as a shock to the suits at the major labels, but Deep Natural is a solid testimony that you can fight the law and win–a message that couldn’t be more stylistically consistent for Michelle Shocked.