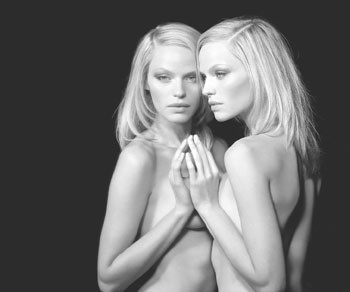 Real Enough to Touch: The mysterious Simone is a director’s dream: no tantrums or outrageous demands.

Lately Al Pacino has been responding less and less to his fellow actors; that flickering, lizardlike gaze is clouding up. Pacino is better than usual in the comedy Simone because he has so many scenes in his own company.

Pacino plays Viktor Taransky, a director on the skids, who was fired from his own picture thanks to a conceited star (Winona Ryder). He’s approached by a mad computer genius named Henry Aleno, played by Elias Koteas. The madman has a gob of cotton in his eye, held in by a patch. Metastasized eye cancer, he explains. In his last few days of life, he wants to give this cult director he loves a present: software containing a synthetic performer named “Simone.” (A young actress named Rachel Roberts is the source for the synthetic girl.)

It dawns on Taransky that he can outwit the egotistical stars who have ruined his career–all those “supermodels with SAG cards.” He can use Simone to finish his interrupted project, a movie tautologically titled Eternity Forever.

Simone is an enormous success, and the fact that she won’t appear in public makes her all the more fascinating. A pair of bumbling detectives (Pruitt Taylor Vince and Jason Schwartzman) try to track her down but can’t expose the synthespian.

Simone is based on an old story. In the Greek myth, Pygmalion carves a marble statue of the goddess of beauty, Aphrodite, and falls in love with it. The goddess finds out and grants the statue life. The former statue takes the name Galatea, and creator and creation live happily ever after.

The myth’s happy ending confounds our expectations. We’re raised with the stern warning not to worship idols. And ever since George Bernard Shaw’s play Pygmalion (the source for My Fair Lady), we also suspect that a girl shaped by a mentor must rebel.

Director Andrew Niccol, who did the well-conceived but far too mannered Gattaca and scripted The Truman Show, is satirizing some of his own ideas about artistic manipulation. Taransky isn’t just a misunderstood genius. The clips we see of his films look excruciatingly arty; it’s easy to understand why they’re not selling tickets.

To contrast the grating aestheticism of Taransky’s films, Niccol cleverly uses backgrounds of vintage Hollywood décor, circa the 1920s, when designers went nuts over Spanish colonial. Simone is so full of Moorish tiles and courtyard fountains that it looks like it was shot in Granada.

The 1920s references recall the movie industry in the days when it was most seriously prone to illusion and star creation. That Spanish fanciness also refers to the age of Garbo, when reticence was more exciting than total media exposure.

It’s certain that Taransky’s adoring young daughter (Evan Rachel Wood) will be the one to expose Simone as an electronic phantom, but why does it take so long? And why does her mother (Catherine Keener) also think Simone is so precious?

Keener keeps Pacino off-balance, while his eerily perfect imaginary co-star exposes Pacino’s tendency toward hermetic acting. That’s why the slumping ending is redeemed by the first two acts. For once in a long time, Pacino doesn’t seem like a synthespian himself.