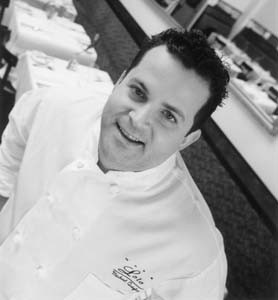 MICHAEL QUIGLEY is a big, fast man. Even his clipped, rapid-fire voice barrels through conversation. And his stocky frame slips easily between the tiny tables of Cafe Lolo with the ease and rapidity born from the scramble of a dozen hotel kitchens.

Indeed, the busy but relatively peaceful little restaurant he has had in Santa Rosa for six years seems almost antithetical to the Sheraton Hotel kitchens and sprawling spa facilities where Quigley got his chops after graduating from the well-known Johnson & Wayles University on the East Coast. “At one place I worked there were 90 cooks on the schedule,” says Quigley.

Now, between Cafe Lolo and his upscale catering operation, Quigley manages just 10 people. He’s planning to expand into the next-door space for more tables, but the popular restaurant will probably never be more than barely pocket-sized. Quigley seems OK with that. “When I was at the resorts and hotels, I didn’t think I wanted to have a small place,” he says, staring out of the window at the occasional passing car on Fifth Street. “But now that I’m doing this, I prefer it, because I’m my own boss. I can’t imagine going back to work for somebody else now.”

Quigley has always found it a little difficult to work for someone else. He recalls the comment that dogged him throughout high school: “Michael could do so much better if he’d only apply himself.”

“I got good grades because I did well on my tests and quizzes, I raised my hand and knew the answers, I participated in class, but I never did my homework, ever,” he says with not a trace of shame.

Of course, now that Quigley has applied himself, he’s focused like a bullet. Consistently high marks from local and regional press pack the house most days and nights. The catering business takes up slack, too. And even when the restaurant’s theoretically closed, Quigley does not have time to sit down. He’s up and answering the phone, chatting with the kitchen staff, checking delivery notices, getting a chocolate chip cookie for the rug cleaner who espouses the wonders of the recipe between crumb-dropping mouthfuls (talk about job security!).

Quigley’s parents, when they visit from out East, are amazed at his pace; his wife, Lori (aka Lolo), is not. Because she’s working there all day, too. “I know some couples would be, like, ‘Oh my god,’ ” says Quigley about the close and constant proximity. “But we’re actually not doing the same job. She’s in the front and I’m in the back, so it’s not as bad.

“Before we had the restaurant, I used to work so many hours. And the [worst] part, I was like, shit, I miss being around my wife. So now at least we’re working on something together, and even though it’s work, we’re able to spend a little time together.”

BESIDES BEING a gigantic sinkhole for time, the sheer scale of hotel work multiplies all the things that could go wrong. And in a hotel, the problems are that much bigger. Quigley remembers a notable disaster that occurred when he was the banquet chef at the Sheraton Palace in San Francisco. At the final party of the winter holiday season, they served bone-in chicken to a party of 150. “There was just a little bit of pink around the bone, which is common. The chicken was cooked,” says Quigley emphatically. But the woman in charge of the group saw the pink and took drastic action. “She got right on the microphone and said, ‘Nobody eat the chicken. The chicken is raw!’ ”

Quigley shakes his head as he remembers how he and his crew scrambled for 150 replacement entrées. “I was so pissed off,” he says laughingly. “Because I was looking at the chicken, and it was fine. It was cooked!”

EVEN IN food-savvy Sonoma County, Quigley still contends from time to time with people’s misconceptions about how food should be cooked. Take seared ahi, for example. “Some people, they ask for their ahi well done, and then they send it back, and say, this is really dry. Well, yeah!” Quigley snorts in disbelief. “If you see seared ahi on the menu, what do you expect? Seared on the outside, raw on the inside.”

With his innovative California menu and a drive to experiment, one might say that Quigley is just begging for that sort of misunderstanding. He recently reintroduced beef cheeks to the menu. Sounds unlikely, like setting out fish nostrils on the antipasto platter, but Quigley is nuts about the flavor. “[The cheeks] are so tough you have to braise them for hours and hours. There’s a lot of muscle going on there, because the cow’s chewing all the time. But if you braise them for several hours, they have such a beefy flavor. They’re so good. … I’m getting sidetracked here,” Quigley blinks and sits up from his reverie.

Animal faces aside, Quigley retains a fairly uncomplicated attitude about what he puts in his own mouth. He gets breakfast at the Cookhouse, chows down on barbecue at family reunions, hits as many ethnic restaurants as he can, and takes it all in happily. “If I go somewhere for dinner, I only have the expectations of what the restaurant is. I don’t expect that it should be this great, grand, glorious thing. As long as I get what I expect.”

People would be surprised, in fact, about how down-to-earth most chefs really are. Quigley says that the myth that chefs are always “on” gets in the way of his social life sometimes: He’ll get invited for dinner and sit down to a plateful of the cook’s performance anxiety instead. “I hate it when people do that–‘Oh, I can’t cook for you.’ I say, ‘Yes, you can. Please.’ ”

Quigley smiles almost wistfully. “Fix me whatever you’d normally fix. I love home-cooked meals. Make meatloaf. I don’t care. It’s just nice to have somebody else cook for me.”