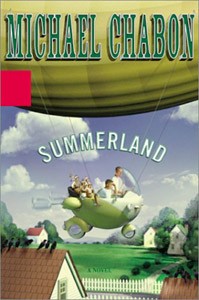 Michael Chabon takes a swing at fantasy in ‘Summerland’

Chaos is gnawing at the roots of the universe. A malign presence is rampaging across whole worlds, leaving disorder and death in its wake. And on tiny Clam Island, just off the coast of Washington State, 11-year-old Ethan Feld is making the unpleasant discovery that he can’t play baseball worth a damn.

Ethan can’t field and he can’t throw. He can’t hit because he doesn’t usually bother to swing. His teammates on the Ruth’s Fluff ‘n’ Fold Roosters call him Dog Boy because he just rests the bat on his shoulder and prays for enough wild pitches to win him a walk. The coach puts the boy in right field to minimize the damage, but Ethan still racks up enough errors to give away games. “There’s no other sport where they put the errors on the freaking scoreboard for everybody to look at,” Ethan complains to his dad.

In short, he seems an unlikely person to be recruited by a transdimensional talent scout looking for a champion ballplayer to save the universe. But that’s exactly what happens in Summerland (Miramax Books; $22.95), a new fantasy epic from Pulitzer Prize-winning novelist Michael Chabon.

Fantasy always plays a major role in Chabon’s work, whether he’s writing about a confused kid with an identity crisis in Werewolves in Their Youth or a pair of comic-book creators trying to alter the cruel course of history in The Amazing Adventures of Kavalier and Clay. But Summerland marks the first time that Chabon, who lives with his wife and three kids in Berkeley, has taken aim at a young-adult audience, setting aside so-called serious fiction to try his hand at the sort of fantasy novel written by J. K. Rowling or Philip Pullman.

Summerland‘s villain is a dude called Coyote, an avatar of chaos so in love with destruction that he’s trying to poison the metaphysical tree that holds up all of existence. He tricks Ethan’s father, a lonely inventor mourning the recent death of Ethan’s mom, into lending a hand.

To foil this plot, Ethan and his two human friends–a tough tomboy named Jennifer Rideout and an alienated kid who thinks he’s a robot named Thor Wignutt–take a flying car to the fairylands, where they recruit a baseball team that includes a morose Sasquatch, a light-fingered wererat, a miniature giant, and a washed-up major league ballplayer named Rodrigo Buendia. With every game they play, this team of misfits gets closer to the nine innings that will decide the fate of the universe.

An astonishing number of influences and source materials come into play here. Chabon draws on Norse mythology, Native American legends, Mexican ghost stories, the folklore of the Wild West, and the strange history of baseball itself.

All this may sound a tad complicated. Indeed, Summerland sometimes seems like the sort of chaotic mishmash that Coyote himself would dearly love. The book has so many exotic characters, so many elaborate settings, so many intricate sub-plots that the narrative occasionally slows down enough to make readers beg for a seventh-inning stretch.

For the most part, though, Chabon holds his audience’s attention with an inventive story and his astonishing gift for wordplay. The book also has about the right mix of light-hearted wonder, comedy, and painfully serious issues like Ethan’s grief over the death of his mom.

Above all, Summerland brings the unexpected vividly to life with astonishing frequency. At times, that chaos seems like a weakness. More often, it offers richly unpredictable rewards to readers of any age hungry for new adventures.