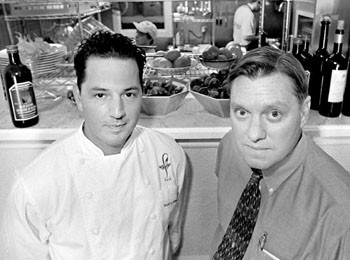 The whole point behind going out to eat at a fine restaurant is to enjoy things that you would normally not find at home. Artfully planned surroundings and smoothly choreographed front-of-the-house pageantry are all an elaborate background for a comparatively tiny stage: the plate of food on the table in front of you. The sensual pleasure of tasting exotic, intense flavor combinations always peaks with the first few bites, and after that it’s just tasty food. The more you eat, the less of its nuances you register.

But it’s those nuances–the mystery and the recognition–that make a well-executed dish an elating experience, so it makes sense to maximize this sensation of initial discovery with many small, carefully composed courses. It’s that philosophy that’s driven the proliferation of tapas bars and tasting menus the past few years. San Anselmo’s Fork is hardly breaking ground with their “small plates” focus, but their appealingly well-rounded and thought-out menu excuses them from pandering to fancy food fads.

Our waitress explained the Fork ordering strategy to us–not that ordering at Fork is challenging enough to require a strategy. Courses tend to be 25 percent to 50 percent smaller than those of other restaurants, so it takes three or four to add up to a full dinner. Chef Scott Howard’s prix fixe “Signature Menu” ($46), which changes daily and offers a vegetarian option, has six courses, not counting the amuse-bouche. There’s also an à la carte tasting menu, divided into “Raw-Smoked-Cured,” “Next,” “Seafood,” “Meats,” and “Sides.”

The 50-bottle wine list offers plenty of food-friendly varietals and blends, and is dominated by French and California wines. Wines by the glass are limited but well-chosen. The sprightly and acidic 2001 Spy Valley Sauvignon Blanc from New Zealand ($6.50) sidled up nicely to many of the “Raw-Smoked-Cured” items on the menu, and the 2000 Clos du Caillou Vieilles Vignes “Cuvée Unique” Côtes du Rhône ($9) paired well with the meatier dishes without overpowering them.

The preliminary courses were promising. Striking to look at, the seafood tartare trio ($8) arrived with small mounds of tartare in three ceramic spoons arranged in a triangle on a plate speckled with fennel seeds and peppercorns. The tuna-artichoke and salmon-shiitake tartares were curiously bland and indistinguishable, but the luscious scallop-hazelnut tartare was a standout, the tender scallops and the crunchy toasted hazelnuts creating playfully dueling textures and nuttiness mingling with the scallops’ umami.

The simple presentation of the seared foie gras with black mission figs and aged balsamic ($12) allowed the quality of its ingredients to shine unencumbered. A salad of butter lettuce, orange imperials, sliced almonds, and blue cheese ($7) was light and refreshing, though not anything that couldn’t be ordered from any caliber of restaurant with decent salads.

Sometimes Fork’s tines hit the mark and sometimes they missed, but those hits and misses usually end up sharing the same plate. The star anise-crusted tuna with red curry sauce ($14), for instance, had meaty little cross-sections of tuna whose flavors were totally bludgeoned by the clumsy and overpoweringly one-dimensional curry sauce, which resonated of the stuff from a generic Madras Curry Powder can.

Fork’s signature soup–carrot broth with chervil sabayon and truffle oil ($6.50)–also suffered the fate of over-curry. The sabayon was moderately foamy–more of an airy mayonnaise–and its delicate essence of chervil and pungent truffle aroma all but collapsed under the dominating weight of the curry. A light purée rather than a broth, the soup itself carried little pure carrot flavor but was still pleasing.

Likewise, the truffled egg salad with smoked trout and a chiffonade of baby spinach on a crostade ($3.75) had its own self-contained highs and lows. The pedestrian egg salad would have been delectable on a deli sandwich, but with its discernible lack of truffling, it too quickly faded into the background under the salty, dense, and divine smoked trout crowning it. If ever a tiny slab of smoked trout was worth $3.75, this was it.

As the courses progressed, the kitchen seemed more sure of itself, and the dishes were overall more harmonious. The duck confit with shiitakes, roasted peaches, and baby turnips ($14) was amazingly satisfying. The skin on the duck confit was crisp, the duck was meltingly savory, and the peaches–whose bite had been mellowed in roasting–perfectly complemented it. The goat cheese and potato flan ($3.75) was like an entire savory flan reduced to a single ramekin, dense with richness and redolent of goat cheese.

Sure, the amount of food per course may be smaller, but flavorwise they are not small at all. The meat and seafood dishes are more like scaled-down entrées than “small plates.” For the amount of food on the plate, it seems fairly reasonable to pay $13 for the lamb chop (singular, mind you) with spinach, pine nuts, and apricot and green peppercorn sauce, when at another restaurant a similar full-sized entrée with two lamb chops would go for around $26. We came out spending about as much as we would have for dinner at most other fine-dining restaurants.

Both of the desserts we tried were good in theory but didn’t follow through in reality. The brioche French toast with crème anglaise and bananas ($6.50) was generous enough to compose an actual breakfast, which is far too big for a dessert. The slices of underripe bananas would have been more flavorful had they been roasted or sautéed, while the French toast itself was similar to what you might whip up yourself casually on a Saturday morning, not the custardy delight a decadent French toast can be.

The cardamom crème brûlée ($6) flaunted a faultless texture, rich and smooth, but the pastry chef had been too heavy-handed with the cardamom, imparting an astringent, medicinal taste that spoiled the whole affair.

Fork’s service was uninterruptive and courteous, but not spot-on timely. Courses arrived and hovered in expectant server’s hands while others scurried in to clear finished plates, and waiters bearing clean forks did so just after the new courses were in front of us, rather than before. (I should note that this is a fairly common problem, and that after sitting helpless with no utensils in sight at more than one restaurant, Fork’s wait staff is comparatively doing a smash-up job of utensil management.)

Our salt and pepper were also gracefully whisked away before the dessert menus were presented, another elegant touch I have not seen in quite some time. Little things like that, even if you don’t consciously notice them, add up to a big impression.

It was that overall impression that made eating at Fork what it was, illuminating the kitchen’s strokes of perfection and muting the less-inspired ones. Fork’s culinary approach is perhaps too ambitious for its own good, which is a bit frustrating, because the potential for it to be a standout establishment is palpable.

With so many diminutive courses to flirt with, you can easily focus on the stronger components and wait until the next plate arrives. It’s almost like a flavor scavenger hunt in every course–which sounds fun, until you stop to think that, ideally, for an average of $8 per pint-sized plate, everything should be stupendous.

As it is now, Fork is a charming, if uneven, delight that’s worth a visit. Which may be too finicky a statement in the long run, because what is OK at Fork is pretty good, and what is good there is excellent. I am still thinking about that smoked trout. A diner there can expect many more miniature flavor explosions than they can overpriced clunkers.