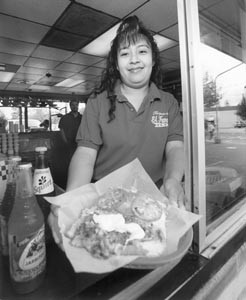 One man’s newfound romance with the Mexican deli sandwich

AS A WORKING-CLASS gringo transplanted last month to central Mexico for a week, my mind reeled with the new experience of being rich. My guides showed me how to eat chilaquiles for breakfast at a big hotel in Guanajuato, and steak drenched in garlic sauce for lunch at a casual yet upscale restaurant. “Whatever you do,” they said, “don’t eat anything from the street vendors. A gringo like you, only here for a week, could get sick.

“And you probably shouldn’t eat anything from the mercado either.”

Ah, yes. But the mercado, the market, a short labyrinthine walk from the white linen and suited waiters at the gringo-safe hotel, held myriad temptations. Just getting there you passed a giant clicking, hissing, chicken rotisserie laden with a hundred pumpkin-colored birds spinning like some primordial socket wrench in hell.

The mercado is a cavernous building teeming with bakers, cooks, and butchers, and another eating establishment every 15 feet. Stacks of deep-fried pork rind made me think over and over of George Bush, who confessed to a weakness for the fattening snack. Plucked chickens snoozed in uncooled glass cases; mosaics of soda pop, sombreros, brass figurines, and a zoo of farm vegetables seduced the eyes.

And there, near the entrance to the mercado, ladies stood beside mounds of pork ribs that glistened under a cluster of heat lamps.

“Cha,” my guide sniffed. “You want to avoid any heavy greasy stuff.”

“I do?” I asked myself, glancing back at the carnitas ladies. I watched as a woman with gold teeth sliced open a bread roll and reached for the glowing case of shiny pork. Silently, I plotted my return. Day-tripping with my gracious hosts, a couple of well-heeled west county vegetarians, left little time or social opportunity for scarfing pork in the marketplace. But if any meal had to be eaten, it was there at the carnitas booth with the gold-toothed woman.

A day later I was back, this time in the company of an approving carnivore. With barely adequate Spanish, I bellied up to the empty bar stools and ordered: “I’ll take one of those, please.” Sensing this was my first time dining without a waiter in Mexico, the friendly lady selected a choice chuck of meat, deboned it, and chopped it pedantically in a wooden pestle. Then she smoothly sliced open a roll, tucked in the meat, spooned a drink of fresh spicy salsa down the middle, and handed me lunch with a can of cold beer. ” Cómo se llama esta comida?” I asked the matron. “What do you call this food?”

A TORTA. A ROAST pork sandwich on a crusty roll, reminiscent of bratwurst in Baden-Württemberg. In the ambiant light and humid warmth of the mysterious mercado where gringos shouldn’t eat, I wolfed down this deeply gratifying but unsung classic. I had “discovered” the Mexican deli sandwich–bread, flesh, and salsa unfettered by distracting garnishes.

In California, where burritos, tacos, and enchiladas dominate the Mexican menu, tortas are the invisible entrée, something odd, unchosen; something gringos pass on when they see Latinos eating at the local taqueria. The world of tortas offers new worlds for appetites. Indeed, in central Mexico, where I never saw a burrito, tortas are a mainstay.

Back in Santa Rosa, I was a fervent torta guy determined to find the real thing close to home, but I was frustrated by what I found. Places like Santa Rosa Taqueria that I hold in high esteem put out a torta soaked in refried beans, iceberg lettuce, and tomato all on a soft, tasteless bread that felt like a hamburger bun. Sonoma Taco Shop was much the same. One Healdsburg taco joint topped it off with an unsavory portion of mayonnaise. The flavors are lost.

And, as Andy Barnett at Centro Espresso in downtown Santa Rosa often says: You need a signed release form from your cardiologist to order one of these. To boot, important names in local Mexican food like Rafa’s in Cotati and the ubiquitous Viva Mexico don’t even carry the touted torta on their menu.

IN MY QUEST for the Great Northern Torta I found a spirited and sensible sandwich at El Favorito, the working-class taco shack on Sebastopol Road in the multicultural Roseland district of Santa Rosa. Favorito serves a respectable torta on a hearty roll that compresses a marriage of carnitas, cheese, and thick slices of avocado.

Also at Cotija on Western Avenue in Petaluma I got a tasty torta, prepared with sour cream and lettuce, but not too far from the Platonic ideal of bread, flesh, and hot sauce.

A review of the available literature on tortas reveals that those smothering their meat with extras are rightfully exercising a variety of traditional torta styles. My favorite, the minimalist “torta ahogada,” is only one option, because in truth a torta is still a sandwich–you get out what you put into it.

Still, several local tortas fail in my mind, and to my palate, because the soft amorphous bread is an immediate disappointment. And these days, lettuce and tomato from large commercial farms don’t pack much flavor.

That slice of heaven that the gold-toothed lady sells for 75 cents in the mercado is not available here.

Happily, torta ahogada, as well as the other more complicated varieties, is an open invitation to the home cook. Find a chewy white roll from a good local bakery, cut lengthwise, pull out some of the fluffy part, add your own home-roasted meat, and top it off with a sensible salsa.

The only limitations are those of your imagination and a lack of willingness to stray from the burrito-eating pack.