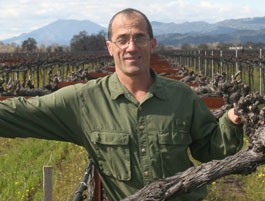 Merlot Can Be That Good: But even Swanson Vineyards’ Chris Phelps must sadly admit that mostly it’s not.

Untold millions of wine experts and amateurs watched the 2004 film Sideways. They absorbed Miles’ deep infatuation with Pinot Noir and they noted his fiery resistance toward Merlot. It was all lighthearted comedy, yet many as naive as I vowed as they left the theater never to touch a bottle of Merlot again–or at least not to bother with an expensive one.

But Chris Phelps and Stuart Harrison of Swanson Vineyards in Oakville feel that Merlot has suffered unjustly in the last few years. There are fantastic Merlots available, they say, but unfortunate circumstances have led to the categorization of all Merlot as inferior. As the producers of 16,500 annual cases, Phelps and Harrison firmly believe in the attributes of this misunderstood wine. They are currently on a national tour with their promotional seminar “Merlot: The Untold Story,” a combination winetasting and academic lecture.

Actually, that mess is not a terribly bad one in terms of economics. Merlot still stands as the most popular red wine in America. Between 1998 and 2003 its sales increased by nearly 100 percent–from 12 million to 21 million cases–and sales have continued to climb in the wake of Sideways. It is the high-end Merlots that have taken a sharp downturn. In fact, they have largely vanished from the market, and the general public has responded by branding Merlot with an undeserved reputation as, well, crap.

“The Merlot market has been flooded with a mediocre product,” says Harrison. “Too much Merlot was planted in the wrong areas in the 1990s, and in about the last five years people have begun to say, ‘Boy, there’s a lot of that stuff. Can it really be that good?'”

But almost anyone can produce a quaffable product, and in 2003 the U.S. market ran awash in the cheap stuff. Growers produced 10 million cases of $1.50 wholesale bottles while producing only 20,000 cases of $15 wholesale bottles. The Merlot’s plight has been further compounded by the American wine labeling system, say Harrison and Phelps. Small patches of earth in California, Oregon and Washington produce some excellent Merlots–the Swanson vineyard among them–but marketers in America label and sell wines by varietal alone.

“And that is why Swanson wines get lumped together with Two-Buck Chuck,” Harrison laments.

I cannot tell foie gras from cat food, yet was still mysteriously invited to attend this year’s kickoff seminar in San Francisco’s Le Colonial restaurant. I arrived by bicycle, assuredly underdressed, a bit too early and ready to drink. Phelps and Harrison welcomed me with a glass of white wine, as they and several attendants finished arranging four long rows of tables for the guests, each covered in a fine white cloth and set with cheese, crackers, fruit and five wine glasses per seat.

Our two Swanson reps lectured for about 90 minutes on the history, virtues and general appeal of Merlot. In a nutshell, this is what we learned: Merlot is a very inoffensive wine with comparatively mild tannins and acids. Most Merlot is perfectly decent, and as such it is an ideal wine for beginners. For these reasons, Merlot has always been hugely popular.

The world’s leader in Merlot production is France. Forty percent–or 84 million cases annually–of the world’s supply originates there, with 26 million cases coming from the Bordeaux region alone. Italy, the United States, Chile and Bulgaria stand in line as the next most voluminous producers. The best Merlot growing regions in the world reside between 38 and 46 degrees of latitude, usually near a large body of water and generally in a Mediterranean climate, although Long Island is known for some quality wine.

Cool temperatures and well-drained clay soils further encourage quality grapes, but the Merlot vine has a tendency to overcrop and produce watery fruit if not properly culled. While Merlot growers can produce a superior wine, they often utilize Merlot as nothing more than a “security wine”; it ripens early, and if a premature winter destroys the other more noble berries on the property, at least the grower has his Merlot fermenting away safely in the vats, preparing for life on the shelf at $4 per bottle.

My standard of living has accustomed me to drinking hugely substandard wines, and so the Merlots featured at the seminar were very exciting for me. Of thousands available worldwide, Phelps and Harrison selected 13, and as I sipped through them I made simple notes accordingly: “Good” “Wowsers!” “Nice/tangy.” But my critiquing skills paled in comparison to those of the other tasters present.

“The Friuli is a bit chewy,” one commented.

“Mmm, the Sawyer is a very broad-shouldered wine,” said another.

“Listen,” one taster asked, “can you pick up that French oak?”

I listened closely until the hour was through. I never did taste the oak or identify the shoulders of the wine, but I went home that day a convert. How wrong I was to shun Merlot after seeing that funny movie two years ago! Merlot is a fine thing. It can taste wonderful, and it will get you drunk.

But for the very serious taster of wine, Swanson Vineyards offers a very unique wine experience at its beautiful Napa estate. A far cry from the three-deep, belly-to-the-bar tasting at more conventional wineries, the Swanson experience leans toward a sophisticated and sober appreciation of wine and the delicate art of food pairing. Reservations must be made in advance, for seating is limited to an intimate group of eight.

Inside the tasting room, guests find a fabulous dining hall decorated with charming paintings, exquisite flowers, burning candles and seashells on the wall. The octagonal table is set with several crystal wine glasses per place and individual servings of cheese, chocolate and sturgeon eggs. Most of the wine is Merlot, and when mixed on one’s tongue with the corresponding appetizer, the flavors melt together in utter excellence.

For 10 wonderful seconds the pretensions of a red-carpet, upper-class wine experience all vanish. The man who can distinguish French oak from American oak in a sip of wine and the man who has other things to accomplish with his time suddenly know no differences; each is in heaven, and each perceives the perfection of the food in his mouth. The cheese, the chocolate and the fish eggs–they are all immaculate.

So is the wine, even if it’s just Merlot.