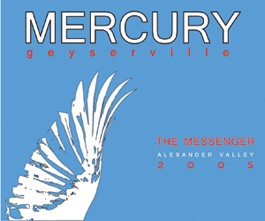 “So don’t you all call it Geezerville around here?” a wisenheimer workmate once quipped on a jaunt to this hamlet. Once little more than a T in the road, Geyserville sure seems like the kind of town where sleeping dogs melt into the road, roosters strut across it without fear, and the afternoon sun crawls at a tortoise’s pace across the sky. Look, then, on the west side of the street, and find Diavola’s wood-fired pizzeria and salumeria, a minimum of five winetasting rooms and the clincher, a dog grooming parlor. Peer into the picture glass window of newcomer Mercury Geyserville’s barrel room and see two turntables and two big amps. Seems like some of these geezers are ready to party.

Inside, jars of jam, pickled peppers and assorted homemade comestibles share a wall of cubbyholes with bottles of wine, lending a country-kitchen look to the concrete-floored, minimalist space. Director of winemaking and lead tasting dude Brad Beard invites us to choose a platter for the LP record player off to one side. Johnny Cash, the Specials, what’ll it be?

While mercury dimes fill one cubbyhole jar, Mercury the planet stars on the labels, and Mercury the comic book hero adorns the T-shirts, so it’s hard to say which one of these endless variations on a theme is the original. (That’d be quicksilver, which originally brought immigrant miners to Alexander Valley. Later, they settled down, grew grapes, and here we are.)

In an effort to mend the trellis that connects reluctant or never-been locals with the area’s most popular industry, Mercury charges no fee, and extends a 20 percent discount to Sonoma County residents. In keeping with the quirky theme, Mercury’s most novel bottling is a 500 ml “jug wine” ($8), a case of 12 packed in a handmade wooden crate. Featuring a little jug handle and a laboratory bottle cap, it’s an adorable three-glass serving of chocolate, raspberry and vanilla, with dried thyme on the lean mid-palate.

From the Russian River Valley, Mercury grabs a few tons of the most mercurial grape. The 2008 Sonoma Carneros Pinot Noir ($25) had plum skin and green cherry notes, with a light and tasty, sweet and round finish. Two barrels of 2008 Anderson Valley Pinot Noir ($25) were feared forever tainted by the Mendocino fires of that year, but from whatever toasted oaks, the smoke blends right in with cooling, damp earth, plum juice and sage, bringing it home with moderate terry-cloth tannin.

Dudes got downright esoteric when naming their Bordeaux-style wines, “The Sister,” “The Father” and “The Messenger.” That would be Cabernet Sauvignon, viticultural son to Cabernet Franc as Mercury is to Jupiter, and related to Merlot; this embodiment (2007 “The Sister,” $35) is brimming with big brambly fruit, and all the voluptuousness of some Venus. Put on your winged shoes and let’s party.