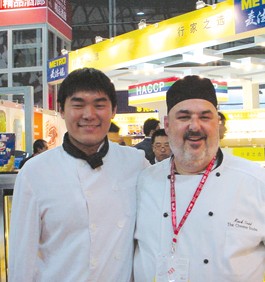 As though makers of artisan cheese in California did not have a sure enough foothold in the culinary marketplace, now the industry is looking to push its products into the cheese-less wilderness of Asia, and they’ve hired just the man to do it: the Cheese Dude.

Otherwise known as Mark Todd, the 49-year-old Monte Rio dairy consultant makes a living promoting and consulting for the Wisconsin Milk Marketing Board, the U.S. Dairy Export Council, the California Milk Advisory Board and a smattering of smaller enterprises. Todd’s main focus—and the passion of his life—is teaching people to enjoy the pleasures of eating cheese with beer and wine.

Much of Todd’s writing appears on BeyondWonderful.com, an educational food and drink forum, but as the Cheese Dude, he regularly takes his job on the road, and in early May he returned from a two-week tour of Asia hosted by the California Milk Advisory Board. The journey, Todd’s third voyage to the Far East in two years, led the Dude and three other marketing specialists into the populated centers of Ho Chi Minh City and Jakarta, where the team visited hotels, culinary schools and restaurants to conduct cheese and wine tastings and lead chefs through pizza-making seminars. Pizza, says Todd, literally serves as an efficient vehicle for delivering cheese to the table in cultures that have never taken dairy production beyond the milk stage.

Cheese-making is believed to have begun about 7,500 years ago in the Middle East, and the tradition migrated westward. A genetic mutation that allowed humans to digest lactose beyond infancy followed, and today in northern Europe some 80 percent of the population can pass cheese through their systems almost as smoothly as whole kernel corn. About 40 percent of southern Europeans are lactose tolerant, and in northern Africa, 10 percent of the population can easily digest dairy. But in Asia, the mutation is less prevalent.

As for cheese itself, the average American eats some 30 pounds of cheese every year. The average Greek, about 60 pounds per year, more than in any other nation. But the average Chinese citizen—of which there are approximately 1.5 billion—eats no cheese at all.

“If China went from zero to just half a pound per year—you do the math,” says Todd, who notes that the California dairy market is in a position to profit since most of Asia does not have the available land to produce cheese. “If you have a product that can ship across the world, then it behooves you to get in on a market that makes up nearly one-fourth of the world’s population.”

Todd traveled the Asian tropics on his latest tour with a crusty, smelly cargo from a multitude of California dairies, including Bravo Farms, Marin French Cheese Company, Point Reyes Farmstead, Sierra Nevada Cheese Company, Rumiano Cheese, Three Sisters and Fiscalini. At evening receptions at each location that they visited, Todd and his men featured tasting tables spread with a wide array of cheeses, California wines and Asian lagers. Guests were invariably fascinated by Fiscalini’s Purple Moon, a cheddar soaked in Cabernet Sauvignon. Todd reports that they also enjoyed aged cheddars and pepper jack.

But during pizza-making seminars, students conveyed a particular fondness for smoked mozzarella melted on the dough, and while many Asian pupils were skeptical of the potency of blue cheese standing alone, it proved popular as a flavorful pizza topping. For many of the chefs and culinary advisers who attended the Cheese Dude’s seminars, pizza was a new thing entirely.

“You’d be amazed at how many did not know pizza,” Todd says. “A few had seen it, some had tasted it, but almost none had ever made it.”

Pizza is a highly versatile food base in that it accommodates all manner of toppings; Korean barbecued beef or General Tso’s chicken will sit on a cheesy pizza more gracefully than some highly charismatic cheese would melt its way vice-versa, says Todd. In such a harmonizing relationship, Todd would like to see Asian and Western cuisine meld together without necessarily interrupting existing food traditions.

Japan and South Korea are saturated with pizza joints, with mayonnaise one of the most revered toppings, but in other parts of the Orient, pizza chain giants have found a resistant market. Dominoes, for instance, failed after a late-’90s launch in China. The corporate monster had established itself without sufficient consumer research, offering delivery service only—and it was not what the Chinese wanted.

“They don’t really look at pizza as fast food,” Todd says. “In China, going out to pizza is a fine-dining experience. They don’t just want it brought to their door and shoved in their faces in a box.”

But Americans generally do. We eat roughly 100 acres of pizza per day, almost a third of which is produced by just four companies—Papa John’s, Little Caesar’s, Pizza Hut and Dominoes—making for a rather homogenized industry.

But with the California Milk Advisory Board encouraging Asian chefs and consultants to employ artisan products into the art of pizza making, the pizza market is liable to remain a more diversified entity in Asia than what it has become in the United States. Such a colorful pizza industry could provide a playground of profits for California’s artisan cheese makers.

The Cheese Dude’s objectives are not just corporate-driven. He equates artisan cheese—as well as bread, beer and wine—to skilled societies in which products are made locally start to finish, by hand, and in which people know the ones who produce their food. In Todd’s own life, artisan cheese and the people who make it have served as a conduit to elevated satisfaction and interpersonal relations, and Todd believes that cheese could likewise benefit the rest of the world.

Before he became “the Cheese Dude”—a title bestowed upon him unofficially by friends in 1995—Todd managed a Goodyear Tires store in Sunnyvale. But when he hit 30, Todd decided to move on and began looking outward for sources of excitement. His attentions drifted toward the North Bay wine country, and in 1990 Todd and his wife bought a house in Monte Rio.

Still in professional transition, Todd befriended one Allen Hendricks, then a promoter of Wisconsin cheese and a carver who scraped sculptures out of tremendous wholesale blocks of cheddar and displayed them at high-society events and festivals. Hendricks introduced Todd to the finer points of cheese, whether crumbly, soft, young or old. With a foot in the door of the industry and with a hardwired love of beer and wine, Todd began to promote cheese and beverages himself, and his next life as the Cheese Dude came blooming like a desert watered by rain.

But Todd and the dairy industry still have lots of work to do. Even America remains in the infancy stages of cheese appreciation. In Europe, 85 percent of cheese is consumed as a table product, enjoyed on its own before or with a meal. Fifteen percent is integrated into recipes. In the States, the numbers are almost exactly reversed; Americans eat most of their cheese camouflaged on pizza and in macaroni, lasagna and other foods. Relatively rarely do we nibble on a block of cheese or spread a soft one over crackers at a dinner party, though the tide is turning.

“I’d like to see Americans wake up to artisan cheese as a table product,” Todd says, “and in Asia, I want to see people wake up to cheese as a food, period.”

Todd envisions Asians eventually shifting from using cheese as a mere pizza topping to consuming it as a standalone table treat. Someone would then need to produce the stuff for a billion-some-odd folks, and as China does not have the available land to do so, California’s artisans could get the job. Cheese prices would almost certainly climb.

It could be bad news for American gourmets, but hey—we’ll always have cheap pizza.